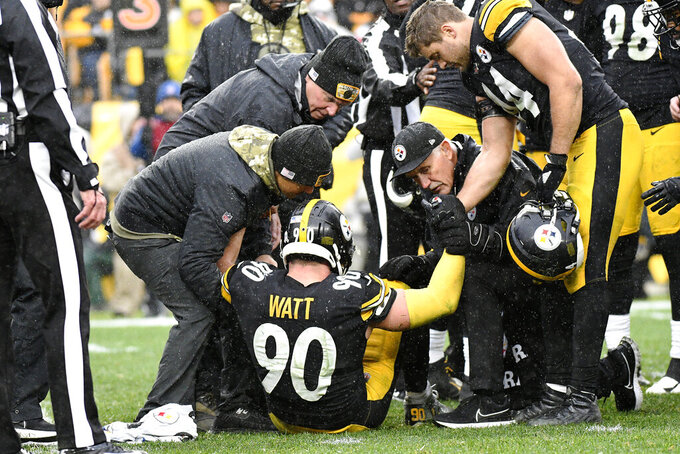 Pittsburgh Steelers outside linebacker T.J. Watt (90) is helped up after being hurt on a play during the second half of an NFL football game against the Detroit Lions in Pittsburgh, Sunday, Nov. 14, 2021. (AP Photo/Don Wright)

Cleveland Browns quarterback Baker Mayfield limped off the field with an injured right knee during a blowout loss at New England, but said he expects to play next week.

Young was injured in the second quarter of Washington’s 29-19 win against Tampa Bay. Young gave a halftime speech to teammates and was back on the sideline later on crutches.

“There’s some concern,” coach Ron Rivera said. “We’ll have him evaluated tomorrow. Potentially an ACL, but we’re not sure yet.”

Young, the No. 2 pick overall out of Ohio State in the 2020 draft, crumpled to the ground with what appeared to be a non-contact injury after trying to get past left tackle Donovan Smith on a pass rush in the second quarter. Young pulled off and threw his helmet while down on the field before he was checked out by team trainers.

A cart was driven onto the field but Young instead motioned to right guard Brandon Scherff to help him stand up. A wincing Young then draped his arms on the shoulders of two people and walked to the locker room with a hitch.

At New England, Mayfield limped off after taking a pair of hits in the third quarter of a 45-7 loss. He said an X-ray after the game showed no structural damage.

“Gotta find a way to get as healthy as possible,” Mayfield said. “Pretty beat up right now. It was just an awkward hit and landing. So, we’ll see. Day by day.”

Coach Kevin Stefanski said Mayfield could have gone back into the game and said the QB wanted to return. The Browns trailed 31-7 at the time Mayfield was hurt. He was 11 for 21 for 73 yards, one touchdown and one interception.

Edge rusher Deatrich Wise drove Mayfield into the turf and was penalized for roughing the passer. Two plays later, linebacker Matt Judon crunched into Mayfield’s midsection, and the QB was slow to get up.

Mayfield left the game a few minutes later and was replaced by Case Keenum, who was sacked on back-to-back plays. Mayfield visited the sideline medical tent and later limped out. He remained on the sideline for the rest of the game.

Mayfield, the No. 1 overall pick in the 2018 draft, missed one game this season with an injury to his non-throwing shoulder. The Browns, who entered the season with hopes of contending for their first division title since 1989, fell to 5-5.

Browns running back Nick Chubb was out due to a positive COVID-19 test.

Cardinals backup quarterback Colt McCoy, playing a second straight game for the injured Kyler Murray, was knocked out with a chest injury in the third quarter of a 34-10 loss to Cam Newton and the Carolina Panthers and didn’t return.

Green Bay Packers running back Aaron Jones hobbled off the field with a knee injury in the second of a 17-0 win against Seattle.

Bills defensive tackle Star Lotulelei was placed on the reserve/COVID-19 list a few hours before kickoff of a 45-17 victory against the Jets. Wide receiver Isaiah McKenzie appeared to injure his right ankle late in the fourth quarter. Coach Sean McDermott didn’t have an update after the game.