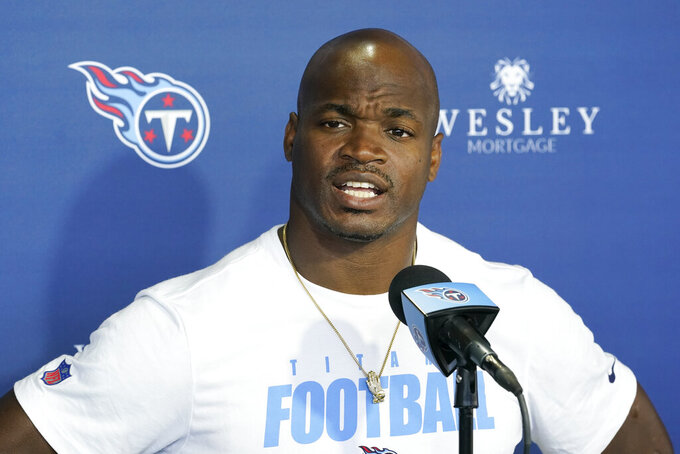 Age is a funny thing in the NFL, where many players are considered “over the hill” in their 30s. And even younger, depending on the position you play.

The number of candles on the birthday cake increases, production on the field decreases — and retirement becomes a dreaded reality long before most of us can even dream of talking about the good 'ol days while collecting our pensions and Social Security benefits.

And then there's Tom Brady, of course, who is the king of aging gracefully. The Buccaneers quarterback is 44, looks like he's 30, leads the NFL with 25 touchdown passes and appears driven as ever to bring back-to-back Super Bowl titles to Tampa Bay.

He's the oldest player in the league, and still one of its best. Shuffling into the sunset seems at least a few years off.

“I’m going to play as long as I can," Brady told Jim Gray for the “Let's Go!” podcast last month. "And when I feel like I’m not a championship-level quarterback and I’m able to prepare at a championship level, then I’ll try something different.”

Brady is not alone in being able to play — and excel — at an “advanced” age. There are 26 other active players 36 or older, with most having key roles on their squads.

Yep, there are plenty of oldies but goodies.

Sure, the facial hair and hair on their heads — if they still have any — might be speckled with gray. And the body might not bounce back as quickly as it once did. But these guys are driven by a passion for football.

Gameday is still the best day, when the office is a jam-packed stadium and “Get off my lawn!” means keeping opponents out of the end zone.

“I just love the game," said 39-year-old Bears left tackle Jason Peters, the NFL's third-oldest active player. "When you stop loving the game, you’re going to let it go. Right now, I still love doing it. It’s fun to me. Going out on Sundays, my nephews and family watch me. So it’s just still fun to me. I like the camaraderie with the guys and stuff, the locker room.

"You don’t get that nowhere else but here.”

So, raise a glass of Metamucil to these old guys of the gridiron:

This is a category of one right now, and it's all Brady.

But he'll have some company soon: Rams left tackle Andrew Whitworth turns 40 on Dec. 12, fittingly an NFL Sunday. And Los Angeles is off that day with a Monday night game at Arizona, so Whitworth can celebrate with a few naps and then get to bed early.

Like Whitworth, Peters will be leaving his 30s soon. He'll turn 40 in January, right after the regular season ends.

Pittsburgh quarterback Ben Roethlisberger is also 39 and his best statistical days might be behind him, but Big Ben is no grandfather clock. He has the Steelers at 5-3 after his 50th career winning drive and 38th fourth-quarter comeback beat Chicago on Monday night.

Washington quarterback Ryan Fitzpatrick will graduate to the next age category in two weeks — Nov. 24 — but FitzMagic is still going, even if an injured hip — hey, no old jokes! — has him on the sideline for at least a few more weeks.

San Francisco kicker Robbie Gould, just back from a groin injury, will also turn 39 next month.

Las Vegas offensive lineman Richie Incognito, the league's other 38-year-old, is on injured reserve with a strained calf and hasn't played this season.

Green Bay quarterback Aaron Rodgers, who turns 38 next month, made headlines last week after testing positive for COVID-19. Before contracting the virus, last season's league MVP was off to another outstanding start with 17 TD passes and just three interceptions.

Packers teammate Marcedes Lewis also just keeps on chugging. The big tight end isn't the productive pass catcher he once was (10 catches for 107 yards), but he's still a punishing blocker.

This is a big group, with running back Adrian Peterson — fifth on the NFL's career rushing list — the latest to join after going from unemployment to Tennessee's backfield. And his debut with the Titans last Sunday was capped with his 125th career touchdown.

Atlanta quarterback Matt Ryan is still going strong with 15 TD passes through eight games, putting him on pace for his most since throwing 35 in 2018.

“I’m just going to live in the moment and enjoy it,” Peterson said last week, probably echoing the sentiments of fellow veterans, "and do whatever they ask me to do.”