With Allen, Broncos offense has the gambles Flacco craved 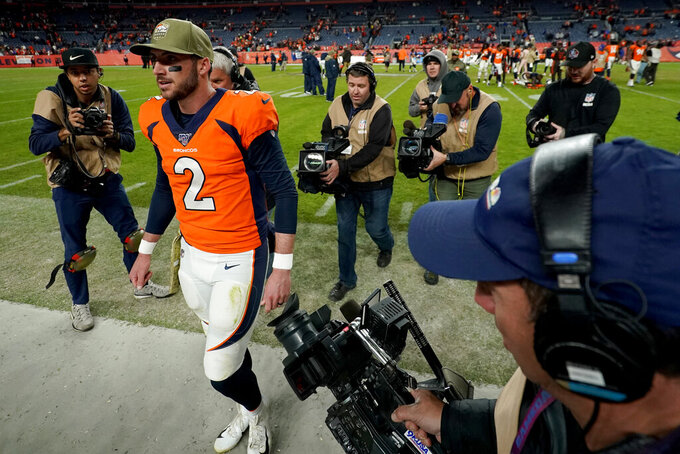 Only, Brandon Allen was the direct beneficiary, not Flacco.

Rich Scangarello busted out all the elements expected of him when Broncos coach Vic Fangio plucked him off Kyle Shanahan's staff in San Francisco to modernize Denver's orthodox offense.

Flacco brought a ton of experience to the equation but not a modicum of mobility, which hamstrung Scangarello, the object of Flacco's ire after a last-minutes loss at Indianapolis when he suggested the Broncos (3-6) were afraid to take chances and get more aggressive.

Then, Flacco went on IR with a herniated disk in his neck after getting clobbered behind a porous O-line and suffering 26 sacks in eight games. That opened the way for Allen, a 27-year-old Arkansas alum and waiver wire pickup from the Rams, to make his NFL debut in his fourth season Sunday.

It wasn't just his two TD passes that had fans jumping out of their seats but his 11-yard scramble on third-and-8, the pistol formations, the bootlegs, the rollouts and the trickery in the Broncos' 24-19 win over Cleveland.

"Obviously 24 points is an area we haven't been to too many times so that's good," Fangio said after the Broncos' scoring average inched up to 16.5 points a game. "I thought we called a good game and made some adjustments in the way we called the game, and they paid off."

In his first start since the 2016 Liberty Bowl, Allen posted the third-highest passer rating by a QB in his Denver starting debut (125.6), behind only Peyton Manning (129.2) and Brock Osweiler (127.1)

"I'm not really shocked because I told you guys before how impressed I was that he got the terminology (down so fast) and how confident he was," running back Phillip Lindsay said. "He was the same dude he was in practice.

"It just goes to show you that everyone has their time, and it was his time. He's doing a hell of a job with us, making plays out of nothing and keeping the chains moving, and that's what you need. I'm proud of him and it's time for him to continue to step up and lead the team."

Von Miller envisioned just this kind of jolt from Allen.

"Yeah, I feel like when Lil Wayne found Drake," Miller said. "I called it at the beginning of the week. I said it. I said he was going to give us the magic. He was going to be ready to go. He was balling in college. I just knew if he got an opportunity, he would be good. There are a lot of talented guys in the National Football League and it was great to have him step up for us and give us a boost. He was incredible."

Rookie Drew Lock returns to practice after the bye for the first time since jamming his right thumb in the preseason, but for now it's Allen's job.

"I hope to win a few more," Allen said. "This is the first hopefully of many."

Denver's defense, which is ranked only behind the 49ers, Patriots and Bills, who are a combined 22-3.

Denver's 28% success on third down ranks ahead of only the Redskins and Jets.

DE Derek Wolfe's five sacks are one shy of his career high set in 2012.

"He's earning himself a lot of money," Miller said of the pending free agent.

RT Ja'Wuan James (knee) has given Denver only 32 snaps for the $32 million in guarantees he signed for.

25.5 years — the average age of the Broncos' starting offense Sunday.

The Broncos get the week off before the clock starts ticking on Lock. His first practice since Aug. 16 will trigger a 21-day window during which the team will have to decide whether to activate him or end his season.