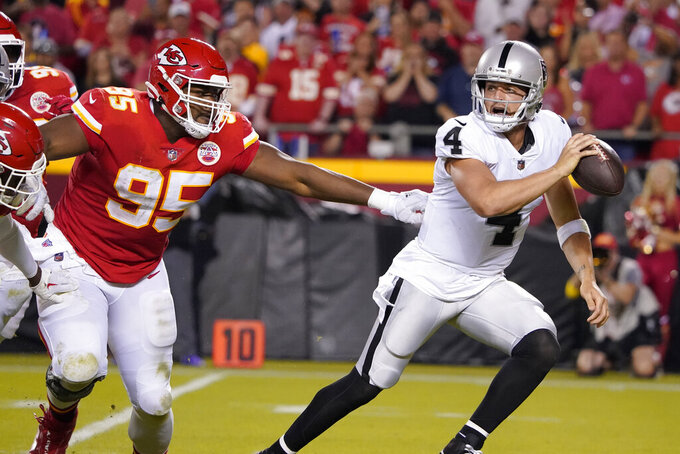 The NFL did not give officials a directive to emphasize roughing-the-passer penalties following Dolphins quarterback Tua Tagovailoa’s concussion, but the topic will be discussed next week when NFL owners meet in New York, a person with direct knowledge of the matter told The Associated Press.

The person, speaking on condition of anonymity because the conversations are internal, said the league isn't planning to make any rule changes amid outrage over two disputed calls in Week 5. Roughing-the-passer penalties are down 45% from this point last year. Through Week 5 in 2021, 51 were called. Only 28 have been called this season, according to league stats.

The league's Competition Committee — comprised of six team owners/executives and four head coaches — makes most of the recommendations for rule changes. Teams can also propose rule changes to be voted on by owners, which require 24 votes to pass.

One idea, suggested by Chiefs defensive tackle Chris Jones on Monday night after he was flagged, might be to allow video review of roughing calls.

That is unlikely, acccording to a person with knowledge of the situation.

The league already went down that road, making pass interference reviewable for one season after an egregious missed foul late in the fourth quarter in the NFC championship in January 2019 cost the New Orleans Saints a trip to the Super Bowl.

The experiment failed miserably and the rule wasn’t considered the next year.

Protecting quarterbacks is a priority for owners, who pay big bucks for the faces of their franchises. Twenty-five QBs are making at least $25 million this season.

The questionable call against Jones — the second in two days — nearly cost Kansas City in its 30-29 comeback victory over the Las Vegas Raiders.

The Chiefs had just scored to trim their deficit to 17-7 when Jones stripped Raiders quarterback Derek Carr from behind just before halftime. The Pro Bowl defensive tackle landed on Carr while also coming up with the ball — replays showed it was clearly loose and that Jones cleanly recovered — but referee Carl Cheffers threw a flag for roughing the passer.

On Sunday, Falcons defensive tackle Grady Jarrett was flagged by referee Jerome Boger for a seemingly harmless sack on Tom Brady. The penalty gave the Buccaneers a first down and allowed them to run out the clock on a 21-15 victory.

Boger made a similar critical call late in the fourth quarter of the Ravens-Bills game a week earlier on a play that many also thought didn't to warrant a flag.

Boger called another borderline roughing penalty in the Falcons-Buccaneers game when Vita Vea was pushed into Atlanta quarterback Marcus Mariota.

Roughing the passer is the only rule where referees are instructed to err on the side of caution.

The NFL rulebook notes: “When in doubt about a roughness call or potentially dangerous tactic against the quarterback, the referee should always call roughing the passer.”

Jones, who has been flagged for roughing the passer nine times in his career, has a solution.