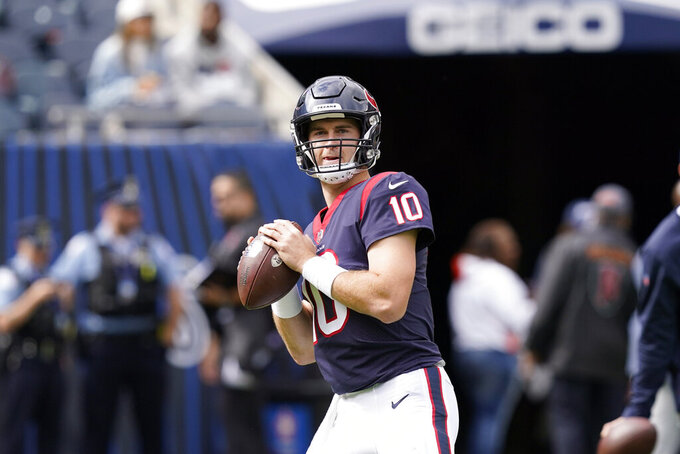 HOUSTON (AP) — The Los Angeles Chargers' last visit to Houston ended in disappointment with a defeat last season that was a blow to their fading playoff chances.

Three games into what is quickly becoming a disappointing new season, the Chargers (1-2) are far less worried about what happened in that game and simply focused a new chance to beat the winless Texans and snap a two-game skid.

“Of course, the guys that were here on the team before ... they know the feeling that we have from that game," safety Derwin James Jr. said. "We’re just trying to get over what happened this last week and just get better from that.

"We’re not trying to really dwell on too much of the bad that happened.”

Houston got a 41-29 victory over the Chargers last December as Los Angeles dropped three of its last four games to miss the postseason. This year, they won their opener against Las Vegas before losing the next two games, capped by a lopsided home defeat by the Jaguars last week.

The Chargers are dealing with numerous injuries to key players, including a rib injury that quarterback Justin Herbert is playing through and losing star defender Joey Bosa to groin surgery. But coach Brandon Staley knows they can’t use injuries as an excuse for not winning.

“We’re going to have to keep playing,” he said. “What you’re trying to do is build a team that can absorb it. You have to be able to do that in the NFL because no team goes all the way through with their team intact. Every team is losing premium players.”

While the Chargers are looking to bounce back from a blowout loss, the Texans (0-2-1) are one of two winless teams after failing to finish three close games. The Texans have been outscored 30-0 in the fourth quarter this season as they opened with a tie followed by two losses to leave Lovie Smith without a win in his first season as the team’s head coach.

“The only way to get the bad taste out of your mouth is to go back to work,” Smith said. “We’ve identified a lot of things. Of course, I’m not going to go over every one, (but) there’s a lot of things we have to improve, with all three phases. That’s what we’re planning on doing.”

Staley said Herbert remains day to day due to a rib injury, but that he passed a major step last week against Jacksonville. Herbert – who was 25 of 45 for 297 yards last week -- faced pressure on 14 out of 46 dropbacks and was sacked only once.

“He avoided a bunch of pressures on Sunday," Staley said. “If you watched that tape, Justin’s legs are still intact. He still has his legs underneath him, and that’s what you need in order to get away from trouble. He still has his brain, which helps him, too. He did a really good job of evading pressure against Jacksonville.

"We need to make sure that we get off to a better start so that we’re not facing some of the situations that we faced in the game.”

Herbert will likely get his center back this week as Corey Linsley is expected to return from a knee injury. Rookie Jamaree Salyer will line up at left tackle after Rashawn Slater suffered a season-ending biceps injury last week.

Herbert has thrown for at least 300 yards in his last six road games, including last season’s Week 16 contest in Houston. Rich Gannon holds the record with eight for the Oakland Raiders in 2001-02.

Houston rookie second-round pick Jalen Pitre had the best game of his young career last week against the Bears, finishing with two interceptions and a sack. He has started each game this season and impressed the coaching staff with his professionalism and attention to detail.

But the defensive back is looking to do much more this season.

“My coaches are being hard on me every week,” he said. “I feel like they’re not being complacent and they’re making sure that I’m continuing to evolve as a player and continue to get better.”

With Bosa on injured reserve after a torn groin, Khalil Mack will likely be double teamed. Mack had four sacks the first two games but was a non-factor as a pass rusher last week. All five of his tackles came in run support.

Chris Rumph II is expected to get the start in place of Bosa, but Kyle Van Noy will also see snaps due to his versatility at inside and outside linebacker.

The Chargers are expected to get back cornerback J.C. Jackson, who has missed two of the first three games after having ankle surgery in late August. The pleasant surprise has been second-year cornerback Asante Samuel Jr., who was targeted five times last week and allowed only two receptions.

Texans QB Davis Mills has been a completely different player at home and on the road in his two-year career.

In eight career games in Houston, he has been solid with 14 touchdowns and just one interception. But he has struggled mightily on the road, with just five touchdowns and 11 interceptions in eight games, capped by the two he tossed last week.

Smith doesn’t make too much of the home and road splits and is looking forward to Mills moving on from last week’s tough game Sunday.

“I think it’s a small body of work to start writing things in ink right now,” he said. “I’m anxious to see his second game at home (this season) and feeding off of the energy from his home crowd. He made improvements this past week and I expect him to take another jump this week.”