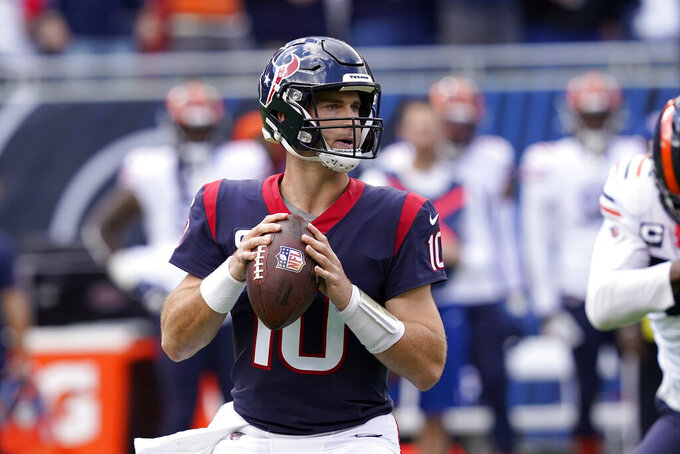 Houston Texans quarterback Davis Mills (10) looks to throw a pass against the Chicago Bears during the first half of an NFL football game Sunday, Sept. 25, 2022, in Chicago. (AP Photo/Charles Rex Arbogast)

TURNOVER DIFFERENTIAL: Chargers even; Texans plus-2.

CHARGERS PLAYER TO WATCH: QB Justin Herbert threw for 297 yards last week despite being questionable because of a rib injury. He has thrown for at least 300 yards in his past six road games. Rich Gannon holds the record with eight for the Oakland Raiders in 2001-02.

TEXANS PLAYER TO WATCH: Rookie DB Jalen Pitre, a second-round pick, had two interceptions and a sack Sunday to become the second rookie in franchise history to have two interceptions in a game and first since Dunta Robinson did it in 2004.

KEY MATCHUP: Houston’s NFL-worst run defense vs. L.A.’s 32nd-ranked running game. The Chargers haven’t gotten their running game going this season, but have a chance to change that Sunday when they face a team that allowed 281 yards rushing last week. That was the third-highest total in franchise history and has the Texans ranked last in the league by allowing more than 200 yards rushing a game. The Chargers are managing just 59 yards rushing a game as Austin Ekeler has averaged 2.5 yards a carry a year after running for 911 yards last season.

SERIES NOTES: The Texans have won the past two meetings. ... The Chargers won the first three games in the series. … The first meeting between these teams came in the second game in Houston’s inaugural season in 2002 and was the first road game in Texans history.

STATS AND STUFF: The Chargers are 1-2 for the seventh time since 2013. ... Coach Brandon Staley is 0-2 against the AFC South. ... Ekeler leads NFL running backs in receptions (21) and yards receiving (139). ... WR Mike Williams has caught a touchdown in four of his past five games. ... WR Joshua Palmer set career highs with six catches and 99 yards receiving last week. ... LB Khalil Mack has four sacks, which is tied for second in the league. He has four sacks in his past four road games. ... CB Asante Samuel Jr. has a pass defensed in eight straight games, the longest active streak in the league. ... S Derwin James has at least five tackles in 11 straight road games. ... P J.K. Scott has an average hang time of 5.0 seconds, which is second in the league. ... Houston QB Davis Mills had 254 yards passing and two TDs in the previous meeting with the Chargers. He has 1,965 yards passing with 14 touchdowns and one interception in eight career games at home. ... RB Dameon Pierce leads all rookies with 182 yards rushing. ... RB Rex Burkhead had 149 yards rushing and two touchdowns in the previous meeting. ... WR Brandin Cooks had seven catches for 90 yards in his previous game against the Chargers in 2018. ... TE Jordan Akins had his fourth career TD catch and first since 2020 last week. ... DE Jerry Hughes had the 11th two-sack game of his career last week. ... LB Kamu Grugier-Hill has eight tackles for losses combined in his past five home games. ... LB Christian Kirksey has at least five tackles in eight of his past nine home games. ... DB Jonathan Owens led the team with 11 tackles last week and is tied for first in the NFL with 36 tackles this season. ... Rookie CB Derek Stingley Jr., the third overall pick in the draft, had his first career sack last week.

FANTASY TIP: Ekeler is due for a breakout game and should see plenty of holes against Houston’s porous run defense.