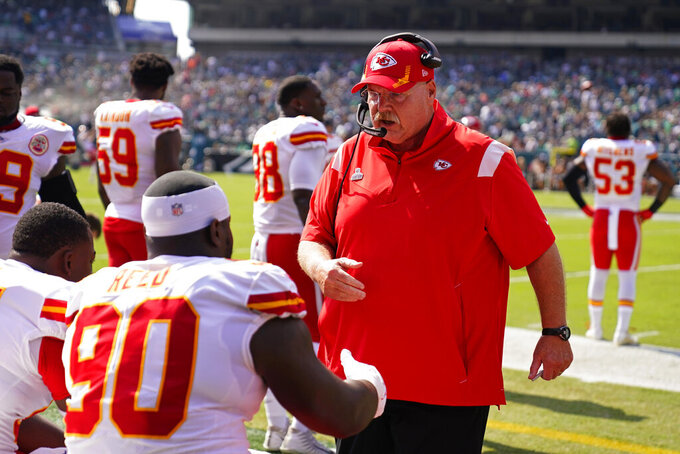 KANSAS CITY, Mo. (AP) — The Buffalo Bills thought they were closing the gap with the Kansas City Chiefs last season, then they lost a pair of games to their old AFL nemesis, including the AFC championship game in January.

There are plenty of people that think they've closed the gap some more this season.

They'll have a chance to prove it Sunday night.

That's when Josh Allen and the Bills return to Arrowhead Stadium to face Patrick Mahomes and the Chiefs in the latest edition of their burgeoning rivalry.

Buffalo (3-1) is fresh off a 40-0 blitz of Houston and riding high behind one of the NFL's best defenses, and Kansas City (2-2) believes it righted itself last week in Philadelphia after a rare two-game skid.

“You know, I'm sure we have a core group of players that were there and can take what happened in that experience and learn from it,” Bills coach Sean McDermott, a longtime assistant to Chiefs counterpart Andy Reid, said of the January loss.

At least on defense, the Bills certainly seem to be a better team. Leslie Frazier's bunch has helped them to three straight wins after a season-opening loss to Pittsburgh, and even then the Bills defense allowed just 252 yards and 16 points.

And when McDermott talks about experience in facing Kansas City last year, he's talking about a defense that returns 10 starters — the only exception is defensive tackle Star Lotulelei, who opted out of playing last season for COVID-19 reasons.

They'll have their hands full with the Chiefs again, though. Not only is Mahomes playing at a high level after throwing five touchdown passes against the Eagles, so is Tyreek Hill (three of the TD catches), tight end Travis Kelce and running back Clyde Edwards-Helaire, who is coming off back-to-back 100-yard rushing performances.

Oh, and the Chiefs could have wide receiver Josh Gordon on the field for the first time.

“He's a tremendous guy,” Mahomes said, “and you can tell he loves playing football. He loves being here. Loves being part of this locker room, and then talent you can just see. How fast he is, how big he is, how good he gets in and out of cuts.”

While the Bills' defense has been downright dominant, the Chiefs' defense ranks among the worst in the league in just about every category this season. That includes the one that matters the most: points.

Kansas City has allowed at least 29 in every game so far this season.

“I mean, of course we hated the way that it ended last year,” Bills wide receiver Stefon Diggs said. "Anybody with a competitive nature would hate the way that it ended. But it's a big game because it's the next game, and it's the same way that we approached all the games previous to this, so I wouldn't make it more than what it is. And we aren't doing that.

“What we're making it is the next game,” he said, “and we've got to come out and execute and play better than we did the last time we played them."

The Bills are 3-1 or better through four games for the third straight season, their best stretch since 1988-96, which spanned their Super Bowl appearance years and closed with Jim Kelly’s retirement. But the Bills began last season 4-0 before losing consecutive games to Tennessee and Kansas City. As it happens, the Bills face the Titans next week.

The Chiefs have had one of the NFL's worst red zone defenses the past two years, and that's about the best news Buffalo could hear. The Bills scored three TDs and settled for four field goals in seven trips against Houston, and they have scored just 12 touchdowns and kicked nine field goals in 21 red zone tries this season.

Allen and Mahomes are both known for their big arms, but the Bills and Chiefs have showed some solid offensive balance the past couple of weeks. Devin Singletary and Zack Moss have helped Buffalo top 100 yards rushing in each of its first four games while Kansas City averaged nearly 6 1/2 yards per carry against the Eagles last week.

Wide receiver Emmanuel Sanders has taken over John Brown's role in the Buffalo offense, but otherwise the group of pass-catchers facing Kansas City is largely the same as last year. That includes Stefon Diggs and Cole Beasley, who has three TD catches in his past two games against the Chiefs.

Kelce extended his streak to 114 consecutive games with a reception last week in Philadelphia while his understudy, Jody Fortson, caught a touchdown pass for the second straight week. But the Bills have also had success using the tight end with Dawson Knox catching a team-high four TD passes, including two against the Texans.

“I feel like there hasn’t been one thing that’s clicked,” Knox said, “It’s just been adding up day by day. The longer we’ve been in the system together and the longer that I’ve been able to build trust.”