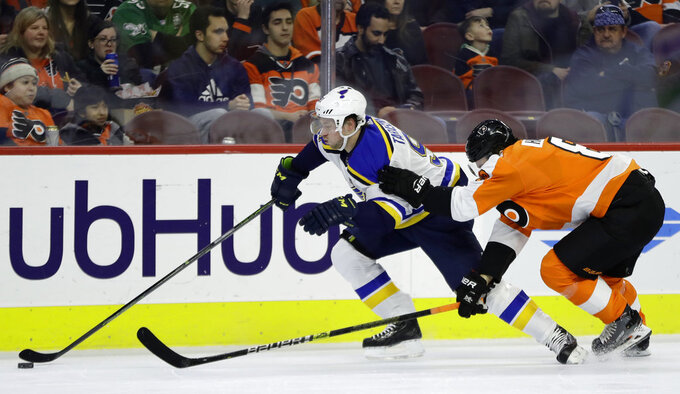 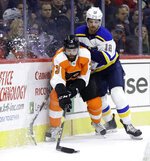 PHILADELPHIA (AP) — The biggest cheers from Flyers fans Monday night came when Gritty wrapped a blindfold around his googily eyes "Bird Box" style and kicked a Nerf football into the stands on a field-goal attempt as part of the "Cody Parkey Challenge."

This is how sad the season has become for Philadelphia — fans save their loudest cheers to rally around the local football team.

Jordan Binnington became the latest goalie to stymie the Flyers. He stopped 25 shots for a shutout in his first NHL start to lead the St. Louis Blues past the Flyers 3-0 in a listless game between two of the worst teams in the league.

Brayden Schenn, Vladimir Tarasenko and David Perron scored to make it an easy night for Binnington.

"Guys are thrilled for him, happy for him," Schenn said. "He's worked hard to get to this point and he finally got rewarded."

The Blues' win gave them 38 points and moved them past Los Angeles out of last place in the Western Conference. Only Ottawa has fewer points than the Flyers (36) in the East after Philadelphia's seventh straight loss. Both teams fired their coaches this season.

Binnington, a third-round pick in the 2011 draft, became the 35th goalie in NHL history to record a shutout in his first career start. The 25-year-old Binnington had played just two games in mop-up duty this season behind Jake Allen. He was sent to the minors in December to keep fresh and earned three wins with a shutout to earn AHL player of the week honors. He was called up — and got the call to start against the hapless Flyers.

"I was definitely excited to finally get the call, and it was a long road," Binnington said. "I'm happy where I'm at right now and I'm hoping to get some more action and be a part of the solution on the rise of the Blues."

"I thought he was solid all game," Berube said. "Very confident, even coming out and playing the puck. He moved it really well and crisply. He looked really good."

Schenn scored his ninth goal of the season on a rebound off the Carter Hart's pads 41 seconds into the second period for the 1-0 lead. Tarasenko scored midway through the third to become the 20th active player to score against 30 other teams while playing for one franchise. Perron scored an empty-netter in the final minutes.

Binnington wasn't challenged much in a half-empty Wells Fargo Center. Once among the NHL's loudest and craziest buildings, the crowds have dwindled with each defeat and the few fans that showed on Monday mostly sat on their hands and booed.

They used to root for Schenn when he starred for the Flyers for six seasons. He scored 59 points in 2015-16 and 55 points the next season before he was traded for the Blues. The Flyers had another reminder of better days on the Blues bench: Berube led the Flyers to the playoffs in 2014 and was fired the following the season. The Flyers fired his successor, Dave Hakstol, last month and have failed to win a playoff series since 2012.

The Flyers fell to 3-6-2 under interim coach Scott Gordon.

The Flyers have scored only 12 goals over their seven-game losing streak, their longest losing streak since they went 0-5-5 over November-December last season.

The Flyers were booed by the die-hards that stuck around as they trudged off the ice, a familiar scene in Philly.

"When we play at home, we're having a tough time," Flyers captain Claude Giroux said. "We're trying to make the extra play, we're trying to push it. It's kind of coming back in our face."