Brady leads Bucs bunch back to Indy for another big game 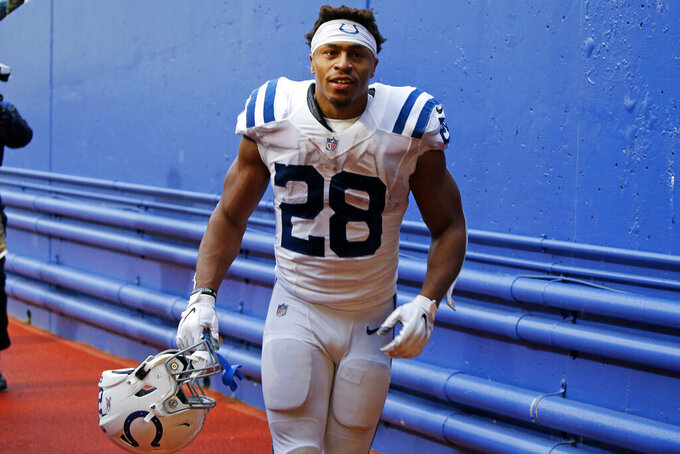 Indianapolis Colts running back Jonathan Taylor (28) heads to the locker room after a win over the Buffalo Bills in an NFL football game at Orchard Park, N.Y., Sunday, Nov. 21, 2021. (AP Photo/Jeffrey T. Barnes)

His beat the Colts in his first career start in 2001. Nine years later, he matched Brett Favre's NFL record for consecutive home wins (25) with a victory over Indy,. He even threw his 500th TD pass at Indianapolis in 2018.

So when Brady makes yet another November trip to Lucas Oil Stadium on Sunday, his first with Tampa Bay, Colts fans don't want to see their old nemesis celebrating another milestone moment.

Even Brady acknowledges it will be different.

“It’s a team I’ve played a lot of games against, and pretty meaningful ones," Brady said. “I don’t think any of those will have any effect on this game this weekend. It’s a totally different opponent, totally different style of play. It’s going to be a great game.”

Brady's memory bank is filled with images of seasons past such as “Deflategate,” Indy's botched fake punt, even claims about Willie McGinest faking injuries to slow down the Colts' offense late in a 2003 game.

But those 19 games all came while Brady was in New England. This time, the Bucs (7-3) and Colts (6-5) face different challenges.

Brady's bunch includes some his old bandmates, such as tight end Rob Gronkowski and receiver Antonio Brown, and some new talent the Colts know well. Running back Leonard Fournette faced the Colts faced twice a year while with Jacksonville, and Bucs coach Bruce Arians won his first Coach of the Year Award in 2012 when he filled in as Colts coach Chuck Pagano was treated for cancer.

And as so often happened with the Patriots, Brady returns to Indy as the defending world champ.

But this time, the Colts may have a solution.

They've won five of six to get back in the playoff hunt, have a defense that leads the league in takeaways with 25, and an increasingly strong ground game that could keep Brady on the sideline for long stretches. Will it be enough?

“I’ve always thought he’s the best ever," Colts coach Frank Reich said. “I mean, he’s incredible, an incredible player. I just marvel at his arm strength at 44 years old. As much as anything, it just boggles my mind."

Last week, Jonathan Taylor became the NFL's first 1,000-yard rusher this season. On Sunday, he can break the league record for most consecutive games with 100 or more yards from scrimmage and at least one TD. He's tied with Lydell Mitchell and LaDainian Tomlinson (eight).

This week, he faces a run defense allowing a league-low 78.4 yards per game and that could have linebacker Devin White (quadriceps) and run-stuffing defensive tackle Vita Vea (knee) back from injuries. White practiced Thursday and Arians said he expects Vea to play. Still, Indy's approach won't change.

“Just to turn around and give it to 28 and him just do his thing time and time again, it was a lot of fun," quarterback Carson Wentz said of last week's win at Buffalo.

The Bucs are 5-0 at home, just 2-3 on the road with losses to the Los Angeles Rams, New Orleans and Washington. Turnovers, penalties and inconsistency on defense have been the main factors.

“When you look at a lot of our games, we’ve obviously performed a lot better at home. I think we are close to 40 points per game at home, compared to 20-something on the road,” receiver Chris Godwin said. “Overall, we have to do a better job of putting together a complete game offensively. Our defense has been playing (well), but we’ve got to do a better job of marrying up the run and the pass game."

It’s been a busy in week in Indianapolis with the last two NBA titlists and the defending Super Bowl champs all coming to town — as well as two of the most disliked professional athletes in the city: Brady and LeBron James.

James scored 39 points in the Los Angeles Lakers' victory Wednesday, so the Colts are playing for an Indy split. Then just four hours after the Bucs and Colts kick off, defending the NBA champion Milwaukee Bucks take on the Indiana Pacers.

Indy is inducting former defensive end-linebacker Robert Mathis into the team’s Ring of Honor Sunday. The eight-time Pro Bowler had a franchise record 123 sacks and won the league sacks title in 2013. He was initially scheduled to be honored last season, but the ceremony was postponed because of COVID-19.

“I was here before as an assistant coach, got a chance to watch it up close and live," Reich said. “He’s a unique player, a unique person. I’m really happy for Robert and what he’s achieved.”