Bucs stingy defense hitting on all cylinders in 2-0 start 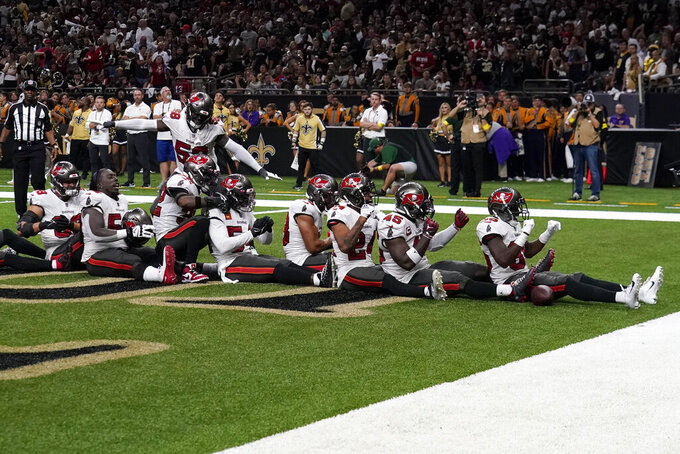 The Tampa Bay Buccaneers celebrates after an interception by cornerback Jamel Dean during the second half of an NFL football game against the New Orleans Saints in New Orleans, Sunday, Sept. 18, 2022. (AP Photo/Gerald Herbert)

TAMPA, Fla. (AP) — The Tampa Bay Buccaneers are 2-0, thanks to a pair of strong performances by a ball-hawking, stingy defense that looks as though it has a chance to be special.

The Bucs haven’t needed Tom Brady to be at his best in beating Dallas and NFC South rival New Orleans to open the season, with linebackers Devin White and Shaquil Barrett leading a relentless pass rush and a rejuvenated secondary forcing six turnovers in two games.

Tampa Bay allowed field goals on the opening drive of both wins, but yielded little the rest of the way in beating the Cowboys 19-3 and Saints 20-10.

Coach Todd Bowles is generally pleased with the way the defense has performed, though he wasn’t happy about a late touchdown the unit gave up at New Orleans. The victory snapped a seven-game, regular-season losing streak to the Saints.

“We shouldn’t have given up that (touchdown). We had 3¾ quarters worth of good work, and we lapsed at the end. We have to learn how to finish out ballgames," Bowles said.

Bowles, the former defensive coordinator promoted to head coach when Bruce Arians retired last March, is the only the second coach in franchise history to win his first two games with Tampa Bay. It's the first time the Bucs have opened a season with road wins in Weeks 1 and 2.

Bowles is the architect of the defense, which struggled at times last season after peaking the previous year during the team’s successful Super Bowl run.

With free agent signing Akiem Hicks joining Vita Vea on the defensive line, Joe Tryon-Shoyinka moving into the lineup with White, Barrett and Lavante David at linebacker, and cornerback Carlton Davis anchoring the secondary after missing much of 2021 due injury, the unit has been dominant again.

“The communication’s been great with the guys," Bowles said. "They get together and watch more film than they have over the years past. They understand what’s getting ready to happen to them, and want to be good. They’re trying to be good.”

The defense forced five second-half turnovers in the second half against New Orleans, including four interceptions in the fourth quarter. The Bucs also sacked Jameis Winston six times, hiking their two-week total to 10.

The offense didn’t score until Brady produced a field goal late in the third quarter Sunday. The offense did put together a long drive to take a 10-3 lead, however Brady finished with a modest 190 yards passing yards with one TD and no interceptions.

Safety Mike Edwards returned one of Tampa Bay’s fourth-quarter interceptions 68 yards for a touchdown. It’s his third pick-6 of his career, tied for the most in the NFL since the fourth-year pro entered the league in 2019.

Wide receiver Mike Evans was suspended one game Monday for his involvement in a melee that resulted in him and New Orleans cornerback Marshon Lattimore ejected from Sunday’s game. Evans was tossed after knocking Lattimore to the ground when the receiver intervened in a confrontation between the Saints star and Bucs teammates Brady and Leonard Fournette. The NFL suspended him for Sunday’s home game against Green Bay, though Evans can appeal the discipline.

Evans’ suspension could leave the Bucs extremely thin at receiver against the Packers if Chris Godwin (hamstring) and Julio Jones (knee) can’t play or are at less than 100 percent. Godwin and Jones both sat out Sunday’s win over the Saints.

13 — The number of points the Bucs have yielded through two games. That’s the third-fewest allowed through two games in franchise history. Tampa Bay yielded 10 during a 2-0 start in 1992. The Bucs gave up 12 while beginning 1-1 in 2003 — the year after the team won its first Super Bowl.

After facing Dak Prescott and Jameis Winston on the road, the Bucs defense will be tested by Aaron Rodgers and Patrick Mahomes when Green Bay and Kansas City visit Raymond James Stadium the next two weeks.