Cardinals can clinch playoff berth win with over lowly Lions 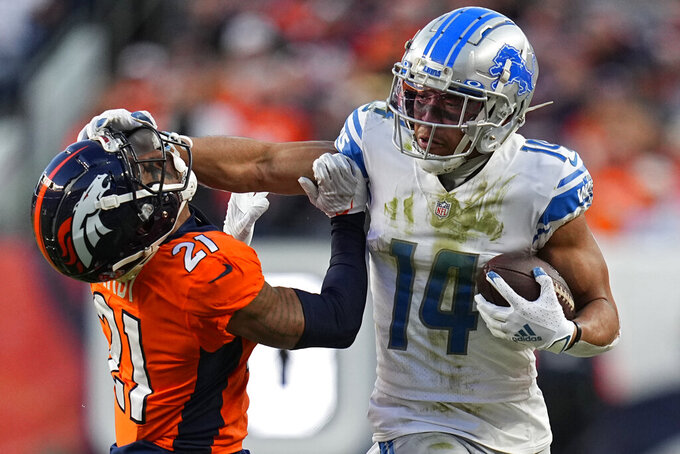 The Arizona Cardinals seem set up for success this week.

The NFC-North leading Cardinals are on the road, where they're 7-0 this season, and they're playing the lowly Detroit Lions.

The Cardinals (10-3) will also be very motivated against Detroit (1-11-1) on Sunday in Ford Field because they have a lot at stake.

Arizona can clinch a playoff spot with a win, which would also keep at least a one-game lead over the Los Angeles Rams in the division. A victory would also allow Arizona to keep pace with the other 10-win teams in the conference — Tampa Bay and Green Bay — for postseason positioning.

While the NFL shares playoff scenarios publicly, Cardinals coach Kliff Kingsbury insisted after losing to the Rams on Monday night that he does not discuss the topic with his team privately.

“That’s kind of outside this building," he said. “We're getting ready for Detroit."

The Lions are relegated to playing for pride — as usual — over the last month, saying they're trying to represent themselves and the team well as coach Dan Campbell closes his first season.

“You’re playing for who you are as a person and what your character is," quarterback Jared Goff said. “At the same time, Dan kind of talked about this a couple weeks ago, being spoiler sometimes is fun.

“You don’t hope you have to be that way, but that’s kind of the role we’re in now.”

The Cardinals are expected to be without three-time All-Pro receiver DeAndre Hopkins on Sunday and possibly longer.

Kingsbury said earlier in the week that Hopkins hurt his leg and was getting an MRI on it along with a second opinion. The 29-year-old Hopkins played the previous two weeks after missing three games with a hamstring injury. He has 42 catches for 572 yards and eight touchdowns this season

“It's almost a battle of attrition at times in December and healthier teams usually have success," Kingsbury said.

The Lions put enhanced protocols in place last week before the NFL instructed the team to do so, hoping to rein in an outbreak that put several players on the COVID-19 reserve list and affected many more with the flu.

A day before playing at Denver last week, running back Craig Reynolds was promoted from the practice squad because Jamaal Williams landed on the COVID-19 reserve list and D’Andre Swift was scratched from a second straight game because of a shoulder injury.

Reynolds made the most of his opportunity, running for 83 yards on 11 carries and catching two passes against the Broncos. Previously, the third-year pro from Kutztown University in Pennsylvania had one carry for 4 yards for Jacksonville late last season.

“He showed he’s worthy of continuing down this road with us," Campbell said.

Arizona is a road win away from becoming the 10th team in NFL history to have eight victories as visitors in a season. A double-digit win in Detroit would make the Cardinals the league’s first team to win eight road games in a row by 10-plus points since Chicago did it during the 1941 and 1942 seasons.

If the Cardinals avoid a stunning upset in Detroit, they will have a chance to be the league's first team to go 9-0 on the road Jan. 2 at Dallas.

Even though the Lions have won only once, they have been competitive in most games and opponents have taken notice while scouting them.

Denver routed Detroit's depleted team by four touchdowns last week, ending a respectable run. The Lions beat Minnesota on Dec. 5 after losing to Chicago and Cleveland by a total of five points and tying Pittsburgh. In a three-week stretch earlier in the season, the Lions lost twice on game-ending field goals from 50-plus yards.

BOTH SIDES OF BALL

The Cardinals are fourth in the NFL in scoring offense, averaging 28.2 points per game, and scoring defense, allowing 19.5 points a game. Arizona is the only team that ranks in the top five in both categories.