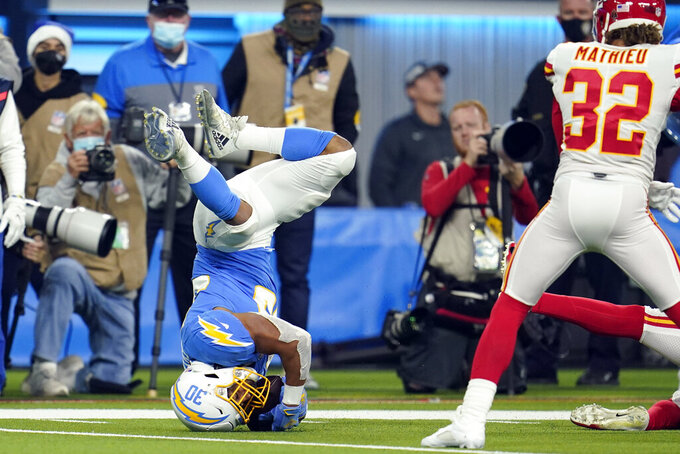 COSTA MESA, Calif. (AP) — The Los Angeles Chargers have 11 players on the reserve/COVID-19 list, including some of their biggest talents. Their hopes for their first division title since 2009 have all but evaporated, and they'll have to fight just to stay above water in the shark tank that is the AFC wild-card playoff race.

Yet the Chargers (8-6) still exuded an undeniable optimism as they got back to work during their extra-long break between last Thursday's heartbreaking home loss to Kansas City and this Sunday's trip to Houston (3-11).

“We're positive, just confident,” said receiver Keenan Allen, who was selected for his fifth Pro Bowl on Wednesday. "We should have won the game (against the Chiefs). Usually, I’m mad in those moments. I don’t know why, but I just felt good about it. The offense played pretty good. I felt like we could have made those plays. ... It’s just a lot to build on.”

Coach Brandon Staley has his Chargers believing they're destined for a big finish to this season, even though they're a .500 team since Week 4 and even though pass-rushing star Joey Bosa will miss their game against the Texans on the reserve/COVID-19 list. Leading rusher Austin Ekeler and big-play receiver Jalen Guyton went on the list Wednesday, although Staley is optimistic they'll be back for Houston.

Los Angeles also could be without defensive centerpiece Derwin James, whose hamstring injury sidelined him early in the loss to Kansas City. James and Bosa both were selected to the AFC's Pro Bowl team on Wednesday.

With so many key Chargers contributors uncertain for the weekend, even the Texans present a significant threat to pull off an upset that could tank the Bolts' hopes for their second playoff appearance in eight years.

But the Chargers realize most of the goals they've set this season are still in reach, starting with a postseason berth that could require a 3-0 finish against Houston, Denver and Las Vegas.

“We have this conversation all of the time in the locker room about where we stand and what we have to do,” Chargers linebacker Uchenna Nwosu said. “How can you not? With the standings being so close, everybody is right there, every game is important and every game is a playoff game. Everybody is focused on the details. We just have to play through it and see what happens."

The greatest reason for optimism on any NFL team is a standout quarterback, and Justin Herbert fills the rest of the Chargers with an understandable comfort. The second-year pro can make up for a wealth of shortcomings in other areas with his 4,058 yards passing (fourth in the league) and 32 TD throws (third).

Herbert was selected as the AFC's starting quarterback for the Pro Bowl late Wednesday, further cementing his growing reputation. He is the Chargers' first quarterback to receive the honor since Dan Fouts in 1983.

“He’s certainly worthy of that selection,” Staley said. “I think what he would tell you is that it’s because of his teammates. I think that we’ve had a really, really quality season around him. He’s been at the center of everything that we’ve done as a football team. I’m so proud of his season.”

The Chargers have allowed at least 21 points in eight consecutive games, meaning they need big games from Herbert and his receivers just to stay in contention most weekends.

While Los Angeles' defense has several strengths, the combination of injury problems, unimpressive personnel at certain positions and endemically poor tackling have prevented Staley from building a defense on par with his NFL-leading group with the Rams last season.

James’ absence was acutely noticeable on Travis Kelce’s game-winning touchdown romp through the Chargers’ secondary in overtime. The Pro Bowl safety didn’t practice Wednesday, but Staley said he hopes James is available as the Bolts continue their upward playoff push.