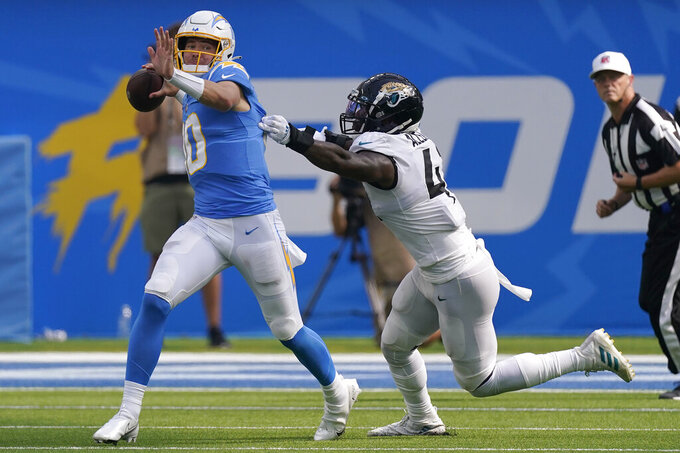 COSTA MESA, Calif. (AP) — Justin Herbert knows what to expect when it comes to dealing with his rib injury after playing last Sunday and going through a week of practice.

The Los Angeles Chargers quarterback is hoping the progress made over the last week translates to a better effort at Houston this weekend.

“I don’t know if there was ever really a moment that it just clicked (last week)," he said. "I think the more reps I get throwing with it, the better I feel. This week was good to be able to throw a little bit more. Progress was made. It still has to heal and do everything I can, but recovery and treatment have been good, so I’m getting after it.”

Herbert participated fully in Thursday and Friday's practices after giving it a go only one day last week, albeit in a limited fashion. He completed 25 of 45 for 297 yards with a touchdown and interception in Sunday's 38-10 loss to Jacksonville. The third-year quarterback usually excels at connecting with receivers on hitch and go routes, but was 7 of 16 against the Jaguars as the Chargers fell to 1-2.

The one thing Herbert has tried not to do is adjust his throwing motion due to the injury. He has attempted to watch more film to get a feel for the calls and progressions that he normally goes through on the practice field.

Offensive coordinator Joe Lombardi said he might have been too conservative with last week's game plan in the first half because Herbert's health was such an unknown. That would be the case on Sunday against the Texans, who are 0-2-1.

While Herbert's progress is reassuring, the rest of the offense has its own concerns.

Salyer was drafted in the sixth round and mainly took snaps at guard during training camp, but he played both tackle spots at Georgia. He started 11 games at left tackle last season when the Bulldogs won the national championship.

Salyer said he found out Tuesday that he would be starting and that the adjustment to playing tackle again has been smooth.

“He’s mature beyond what you would expect from a guy of his age. He’s played left tackle in the SEC. He’s blocked the best (in college), which quickly turn into the best in our world," Lombardi said. "He was blocking those guys all day in practice and facing the competition he did. I know it’s not too big for him. I think he’s going to handle it just fine.”

Joshua Palmer is expected to get the start again in Allen's absence after having a career-high six receptions for 99 yards last week.

Corey Linsley will be back at center after missing last week with a knee injury.

Notes: LB Joey Bosa had surgery in Philadelphia this week on his torn groin. ... TE Donald Parham (hamstring) is questionable but coach Brandon Staley said he would be inactive. Staley wants to give Parham another week of practice to build up his conditioning. ... CB J.C. Jackson (ankle) was full go in Friday's practice and is expected to start Sunday.