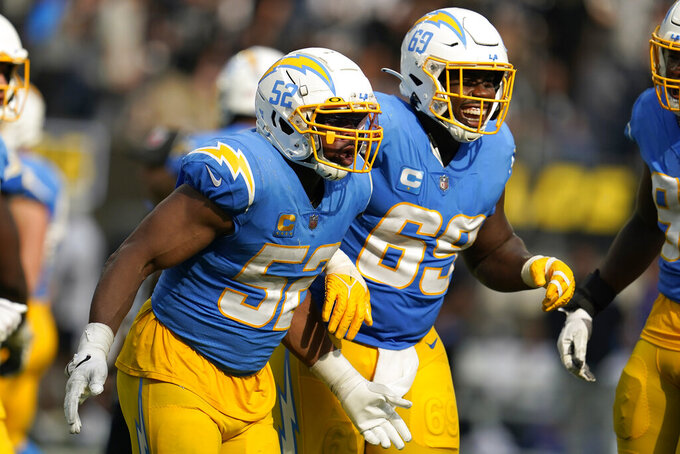 COSTA MESA, Calif. (AP) — Khalil Mack hasn't had much time to reflect on his Los Angeles Chargers debut, especially since they have a short week before facing the Kansas City Chiefs on Thursday night.

After putting in a performance that most players would consider a career game, Mack was left with one impression after watching the tape of last Sunday's 24-19 victory over the Las Vegas Raiders.

“It wasn't good enough. I left a lot of stuff out there and I have to get it corrected,” Mack said on Tuesday before the Chargers conducted a walkthrough session.

Mack was the third player in franchise history to record three sacks in an opener since 1982, joining Shawne Merriman and Rodney Harrison. He also added six tackles, seven QB pressures and a stop in the run game for a 1-yard loss, the only run stuff of the game for the Chargers defense.

Mack and Joey Bosa — who had a combined 4 1/2 sacks and 16 QB pressures in the opener — are looking to create the same type of havoc against Patrick Mahomes and the Chiefs. There were three plays against the Raiders where both Mack and Bosa were able to get into the backfield at the same time.

“It's great to talk ball on the sideline and just communicate about what we get and what each offensive tackle is giving us. So to bounce ideas off each other throughout the game is good,” Mack said.

Defensive coordinator Renaldo Hill said Mack’s attention to the run game was the biggest surprise that stood out during training camp.

“You think of his pass rush. But he’s talking to Joey about setting the tempo in the run game, how those two will work together,” Hill said.

Bosa has 2 1/2 sacks in six meetings against Mahomes, including 1 1/2 last year. Mack has faced Mahomes only once, a 2019 meeting in Chicago, but did record a sack.

While Mack is in a division with Carr, Mahomes and Russell Wilson as the quarterbacks, any sack is a special occasion.

“It’s a game we get to play and have fun. They’re all equal. You want to sack them all,” Mack said. “There are not going to be too many times you play against them.”

Brandon Staley split last year's games against the Chiefs in his first season as Chargers coach. Los Angeles won a 30-24 meeting in Week 3 at Arrowhead Stadium last season before losing 34-28 in overtime in Week 15 at home.

With six new starters on defense this season — including Mack — Staley feels like he has a unit that can hold its own against Kansas City as the Chargers look for their first 2-0 start since 2012.

“You need a team to be able to defend an offense like this, and certainly a player like Patrick. Any time you are facing an offense that has weapons — running backs, receivers, tight ends — and that has an outstanding offensive line, you’re going to need the same thing on defense, that same type of formula," Staley said. "What Khalil does is he gives you that chance up front, both in the run game and the pass rush, to be able to impact the game. You need a lot more people than just your starting 11 to be able to defend a team like this.”

Notes: WR Keenan Allen (hamstring) isn't expected to play this week and could likely be out longer as Staley noted the injury “could take some time.” ... CB J.C. Jackson (ankle) was a limited participant for the first time since undergoing ankle surgery on Aug. 22. It will be a game-time decision on if Jackson will make his Chargers' debut after signing a five-year, $82.5 million contract during the offseason. ... TE Donald Parham (hamstring) has been ruled out for the second straight game.