Chargers rule out Keenan Allen, 5 others vs. Falcons 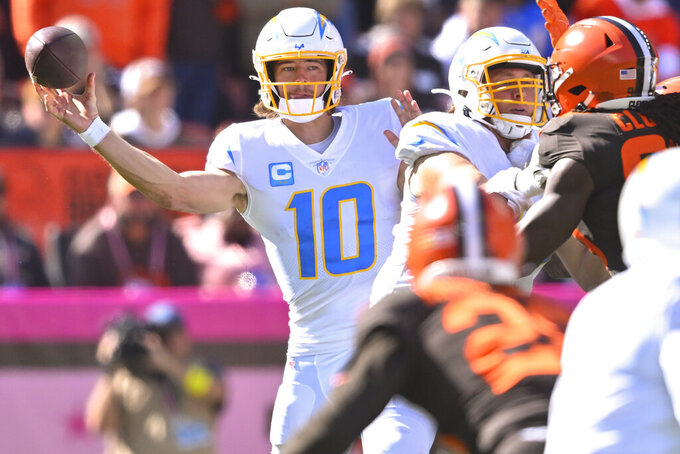 COSTA MESA, Calif. (AP) — Justin Herbert is about to get a crash course in playing a game without his top two receivers.

The Los Angeles Chargers ruled out Keenan Allen for Sunday's game at Atlanta due to continuing problems with his hamstring. Allen said he experienced a setback last week while doing a workout and didn't practice all week.

Mike Williams suffered an ankle injury in the Oct. 23 loss to Seattle and is expected to miss at least the next three games.

Joshua Palmer and DeAndre Carter are expected to start in Allen and Williams' place, but even that isn't assured. Palmer came out of concussion protocol earlier this week and has been a full participant in practices, but Carter is questionable due to illness.

Michael Bandy and Jason Moore are also on the roster with the possibility that Joe Reed or Keelan Doss could be elevated from the practice squad.

With injuries impacting the receiver group, Austin Ekeler leads NFL running backs with 53 receptions. It is only the third time a running back has at least 50 catches through his team’s first seven games.

Ekeler could become the first running back in NFL history to have three straight games with double-digit receptions if he has at least 10 against the Falcons.

With Hopkins and backup Taylor Bertolet both sidelined, Cameron Dicker will handle kicking duties. Dicker will be the 13th kicker used by the Chargers since they moved to Los Angeles in 2017.

Despite the injuries, the Chargers are 4-3 as they begin a stretch where four of their next five games are on the road.