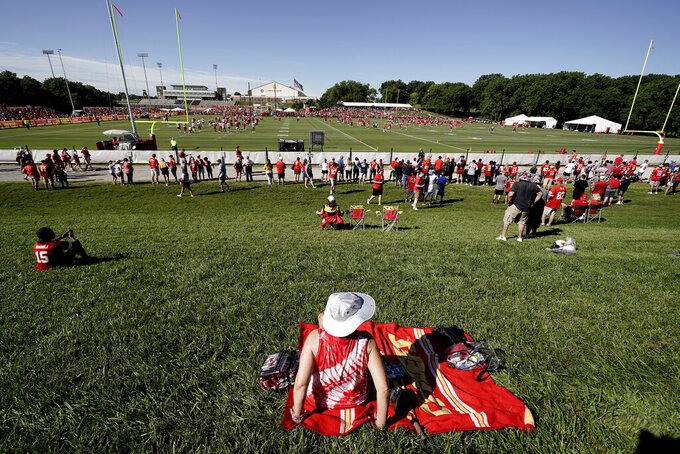 Brown and the Chiefs had been working throughout the offseason on a long-term contract, but the sides were unable to come together before the mid-July deadline.

The Chiefs' final offer was six years and nearly $140 million with about $30 million due at signing, which would have made him one of the highest-paid lineman in league history.

Instead, Brown decided to gamble that this play this season will warrant an even bigger deal next offseason.

Brown was working with a new agent, Michael Portner, and received advice throughout the process from Jammal Brown, a former NFL offensive lineman with New Orleans and Washington who has been serving as his mentor.

“We told them we appreciated their professionalism," Veach said. “He looks like he's in great shape."

Brown, who will be due about $16.7 million under the franchise tag, skipped the offseason program and first week of camp, though he was not fined because he was not under contract. He still was not on the field Monday as he checked into camp, but is expected at practice this week; the Chiefs open the preseason Aug. 13 in Chicago.

“It’s hard to mimic the game speed and putting the uniform on and so on — the helmet and pads — when you’re doing stuff on your own. You have to go through that to get yourself right and he understands that,” Chiefs coach Andy Reid said after practice on a hot, humid morning. “He will just have to catch up on the new stuff and then the conditioning stuff.

“You have a right to throw him back in and go,” Reid added. “When he gets here, we’ll talk to him and see where he’s at.”

Roderick Johnson has been playing left tackle with the first team during the first week of camp, and that could give him the inside track on being the primary backup. He appeared in 29 games with six starts over three seasons in Houston.

While Johnson had earned rave reviews, the importance of having the Chiefs' best offensive line on the field was clear Monday when the pocket got pushed back and Mahomes got his foot stepped on. The Pro Bowl quarterback hobbled off the field and spent time with trainer Rick Burkholder before returning for final jogging and stretching.

Mahomes is not expected to miss any time in camp, but the close call is precisely what the 26-year-old Brown is expected to help prevent from happening. He only allowed four sacks and 37 pressures in his first season with Kansas City, and no sacks over the Chiefs' final five regular-season games.

With the 6-foot-8, 360-pound Brown back on the field, the Chiefs return their entire offensive line from last season.

And given that 29-year-old left guard Joe Thuney is the elder statesman, and 23-year-olds Creed Humphrey at center and Trey Smith at right guard have a year of experience, the group could take a dramatic step forward this season.

“Everybody in this building loves Big O,” Chiefs tight end Travis Kelce said with a smile. “Hopefully we get him here and acclimated as soon as possible. It's been a different locker room (without him in camp). Such a big dude, big personality. He brings a lot of life to the group and I'm happy to have him back.”

Notes: Reid did not sound concerned about Mahomes' ankle. “He got stepped on," Reid said. “He's fine.” ... TE Jody Fortson (quad) did conditioning and rehab work after getting hurt in Saturday's workout. ... Kelce is among numerous players who complained about the new Guardian Caps, which some players are required to wear over their helmets at practice through the first two preseason games. They are designed to minimize the impact of helmet-to-helmet hits. “We're out there wearing these mushroom caps that are just adding weight to our heads,” Kelce said. “Hope we get rid of them.”