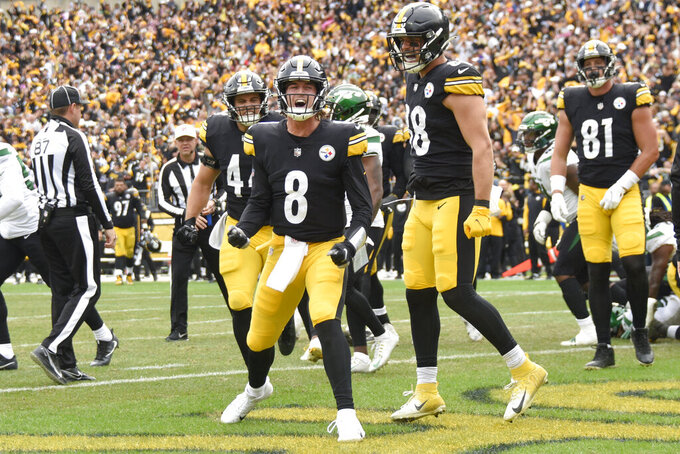 Pittsburgh Steelers quarterback Kenny Pickett (8) celebrates beside teammates after scoring a touchdown against the New York Jets during the second half of an NFL football game, Sunday, Oct. 2, 2022, in Pittsburgh. (AP Photo/Don Wright)

Games are going down to the wire in the NFL at an unprecedented rate.

With a record 15 of 16 games last week within one score in the fourth quarter, the league is having the most competitive start to a season in its history.

Of the 64 games, 50 of them have been within one score in the fourth quarter for the most ever through four weeks.

Sixteen games have been decided by a score in the final 2 minutes of regulation or in overtime, one shy of the record through four weeks set in 2012.

The average point differential of 8.6 per game is the second lowest since the merger through weeks, trailing only 8.2 ppg differential in 1983

The close calls have led to tight standings throughout the league with this being the first time since 1990 that every team enters Week 5 with at least one win or one tie.

There are 15 teams that are 2-2 so far this season, tying 2017 season for the most teams splitting their first four games. All four teams in the NFC West are 2-2. The only other time in the 21 seasons of the eight-division era that an entire division started 2-2 came in 2019 in the AFC South.

Seven teams gained more yards on the ground than through the air led by the 262 yards rushing by the New York Giants in a rare 4,000-yard rushing week in the NFL.

The teams combined for 4,052 yards on the ground for the fifth most prolific rushing week in the past 10 seasons and sixth time in that span that the league topped 4,000 in a week.

The combined 233.4 yards rushing per game are the second most through four weeks of a season since 2000, just 6 yards behind the 2020 season.

The ground game hasn't been prolific through the league. Tampa Bay had just six rush attempts for 3 yards in a loss to Kansas City. That marked the fifth time in NFL history a team had six or fewer rushes in a game with Brady the QB in three of those games.

It also happened in 2004 in a New England loss at Pittsburgh and in 2020 in a Tampa Bay loss to New Orleans.

LIGHT UP THE SCOREBOARD

No team has ever had quite a start to the season like the Detroit Lions who are lighting up scoreboards when they are on offense and defense.

The previous 29 teams to score at least 140 points in their first four games had a combined record of 109-7 (.940), with only the 2002 Chiefs failing to have a winning record before the Lions did it this year while losing three of four games.

The 281 combined points in Detroit's games are the most for a team through four games.

Jared Goff is tied for the league lead with 11 TD passes and Jamaal Williams leads the NFL with six TD runs. The Lions are the sixth team in the Super Bowl era to have the league leader in passing and rushing TDs, according to the Elias Sports Bureau.

The 2022 season will finally get a rookie starting quarterback.

Kenny Pickett will get the nod for Pittsburgh on Sunday at Buffalo, marking the latest in the season since 2000 for the first start by a rookie QB.

That year, Doug Johnson and Spergon Wynn both made their first starts in Week 14.

Rookie Bailey Zappe could also get his first start for New England if Mac Jones and Brian Hoyer are still hurt. Zappe came off the bench to throw a 25-yard TD pass last week, marking the first time since 2007 that it took until Week 4 for a rookie to throw a TD pass. Trent Edwards had the first that year in Week 4 for Buffalo.

Pickett did run for two scores on Sunday after replacing Mitchell Trubisky, becoming the 22nd player and first QB to run for at least two TDs in his NFL debut.

This will be just the second of those games to feature two teams with winning records heading into the game, with Houston (6-3) and Oakland (7-2) doing it in 2016 in Mexico City.

The Giants are 2-0 abroad and can join New England (3-0) and Minnesota (3-0) as the only teams to play at least three international games and win them all.