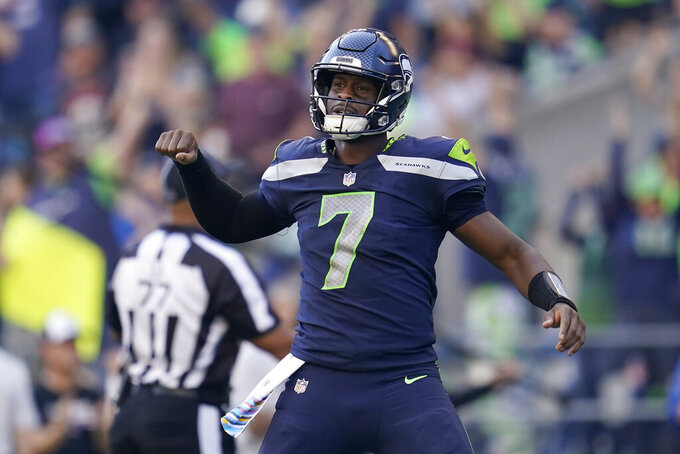 Seattle Seahawks quarterback Geno Smith (7) celebrates a touchdown run by running back Kenneth Walker III during the second half of an NFL football game against the Arizona Cardinals in Seattle, Sunday, Oct. 16, 2022. (AP Photo/Abbie Parr)

LOS ANGELES (AP) — Even though Sunday’s matchup between the Seattle Seahawks and the Los Angeles Chargers features plenty of offensive weapons, Pete Carroll and Brandon Staley want to see if their defenses can put two solid games together.

Both coaches came up through the defensive ranks, but their units have struggled.

Seattle (3-3) has won two of its last three but has allowed an average of 27.2 points per game this season, tied for second most in the league, and 30th in yards allowed at 410.8 per game. After splitting shootouts against the Detroit Lions and New Orleans Saints, the Seahawks did not allow an offensive touchdown in last Sunday’s 19-9 win over the Arizona Cardinals.

Players said the most significant difference between the first five games and last week was that the linemen had more freedom to be aggressive at the snap instead of being tasked to reach and react to plays. That resulted in six sacks and the Cardinals averaging only 2.5 yards per rushing play.

Clint Hurtt is in his first season as defensive coordinator and brought in a scheme that uses more 3-4 fronts.

“The production that we had last week with the tackle for losses, the sacks, the pressures on the QBs, and the hits, obviously it worked, so why don’t we keep it up,” said linebacker Uchenna Nwosu, who played four seasons for the Chargers before going to the Seahawks in the offseason.

Los Angeles (4-2) has a three-game winning streak but went to overtime on Monday night against Denver and survived at Cleveland after a missed field goal. The defense is 26th in points allowed per game (25.3) and 18th in net yards given up per game (349.8) after allowing big plays.

The Chargers have surrendered 15 plays of 30 yards or more, including five touchdowns. They did limit Denver to 72 total yards after halftime, including minus-9 passing.

Despite Joey Bosa being out with a groin injury, the Chargers have posted four sacks in two of the last three games. Khalil Mack is tied for second in the league with six sacks, and Drue Tranquil is coming off his first multi-sack game.

“Guys are stepping up, just kind of doing their job and playing within their roles,” Tranquil said. “When you lose a superstar like Joey, other guys have to step up, and I think you’re seeing that.”

Staley is familiar with Seattle’s offensive system since he was on the same staff with Seahawks offensive coordinator Shane Waldron with the Los Angeles Rams in 2020. Staley is no stranger to the wide receiver duo of DK Metcalf and Tyler Lockett after facing them three times that season.

“I don’t think that it is a surprise that they are scoring the ball because they have the pieces to score,” Staley said. “I think Geno is doing an outstanding job distributing, taking care of the football and leading that group. A very, very tough cover and a very impressive group.”

Herbert is looking to avoid going three straight games without passing for 300 yards for the first time in his pro career.

The Chargers have been without leading receiver Keenan Allen for the past five games due to a hamstring injury. Fellow receiver Joshua Palmer will likely miss Sunday’s game after being placed in concussion protocol. Running back Austin Ekeler leads the team with 41 receptions and has six touchdowns in the past three games.

“He’s a big guy that can move around, get outside of the pocket, and strike you dead,” Carroll said about Herbert. “The fact that he got banged up earlier in the year and just kept fighting through it, you have to give him a lot of credit on all levels.”

Seattle rookie cornerback Tariq Woolen was named the NFC defensive player of the week after coming up with his fourth interception of the season last week against Arizona.

Woolen was thought to be a project for Seattle when it drafted him in the fifth round out of UTSA because of his raw skills and inexperience at the position. But his athleticism and acumen got him on the field right away.

“The merging of his background and all that and the way we talked, the stuff that we do fits him perfectly for his makeup and all,” Carroll said.

Special teams might be under the spotlight more with Chargers kicker Dustin Hopkins out due to a hamstring strain. Taylor Bertolet will be called up from the practice squad, but had three field goals in the Oct. 9 win at Cleveland after Hopkins was inactive with a strained quadriceps.

Another Seattle rookie made his first start last week, and running back Kenneth Walker III looked very much the part of a workhorse starter.

Walker carried 21 times for 97 yards and scored Seattle’s only touchdown. It was his second straight week with a rushing TD after showing off his big-play ability the previous week on a 69-yard scoring run against New Orleans.

With Rashaad Penny out for the season with a fractured lower leg, the performance against the Cardinals was important for Walker and the Seahawks to know he can get 20-plus carries in a game, handle the workload and be productive.