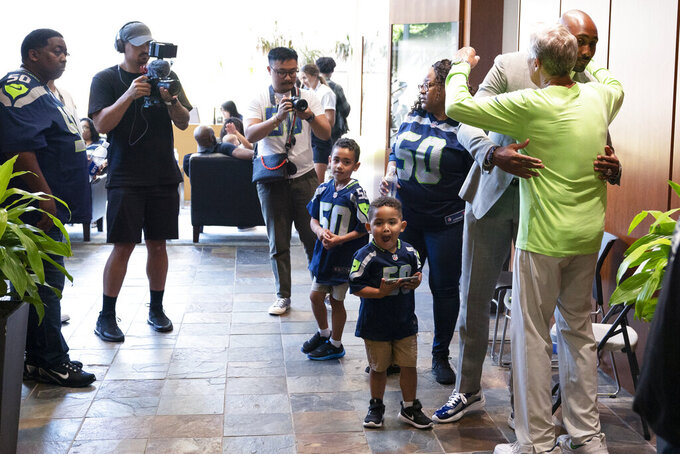 RENTON, Wash. (AP) — Before he stepped to the podium, K.J. Wright was hopeful he’d be able to keep his emotions in check.

It took only a couple of minutes for the tears to start.

“I gave this game every ounce I had in my body. I gave it my heart and my soul. I put my body on the line. I made sacrifices in my personal life. It’s safe to say, I’m on empty right now,” Wright said on Thursday.

The 11-year NFL veteran announced his retirement a day after signing a one-day contract so that he could step away from the game with the team that drafted Wright in the fourth round of the 2011 draft.

He grew into being a stalwart for the best teams in Seattle’s history, a Pro Bowl selection and 10-year anchor as part of the Seahawks’ defense.

It was an emotional 25 minutes for Wright that included calling his mom, dad and wife onto the stage to express his appreciation. He directly thanked Seattle general manager John Schneider, coach Pete Carroll, former teammates, coaches, equipment staff and athletic trainers for their roles in his career.

Wright arrived in Seattle before the Seahawks ascended to being a dominant force in the NFC, playing in consecutive Super Bowls and winning the first title in franchise history with one of the more dominant defenses in recent history.

He was integral to the foundation of those title teams. And even as others cycled in and out of Seattle, Wright remained.

“From where he started out and all that but where he showed himself so early to be such a factor on our team, mentality and culture and all of that,” Carroll said. “He will always hold a special place.”

Wright said of all his seasons, he was most proud of 2018 when an ongoing knee issue led him to play in only five games and start to believe his career was going to be over. He also was concerned about his future going into the 2020 season. Wright had shoulder surgery just before the start of the COVID-19 pandemic and with his rehab options limited, was worried he’d pass his physical.

He did pass and went on to start all 16 games.

But the following offseason was when Wright started to consider retirement. He’d reached his goal of playing 10 seasons, but figured after his 2020 performance — even if Seattle was ready to move on — there would be options in free agency.

“My phone was so dry. Coming off my best year, my 10th year I thought, ‘somebody’s about to call,’ but that didn’t happen. That ... sucked,” Wright said.

Wright eventually signed with the Raiders and appeared in every game for Las Vegas. But his family remained in the Seattle area and the separation cemented that if there wasn’t an opportunity back with the Seahawks, it was time for Wright to step away.

He said he still plans to attend as many Seahawks games as he can this fall, but “in the suite sipping on tequila.”