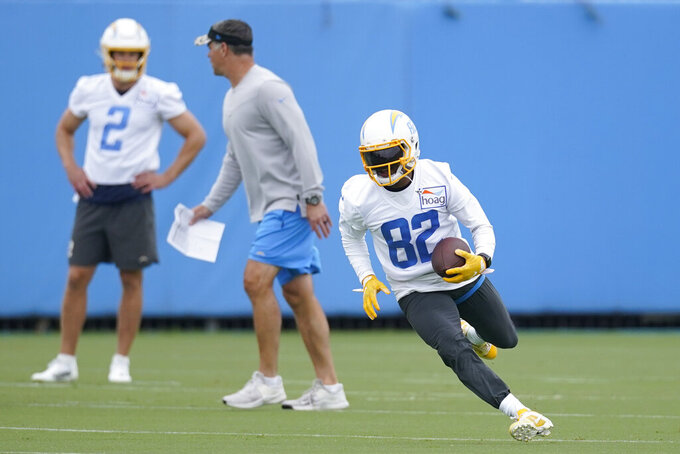 Coming off a Pro Bowl season and not having to learn a new offense can do that.

For the first time in his three-year NFL career, Herbert doesn’t have to learn a new offense or coaching staff during the offseason.

In 2020, Herbert learned things on Zoom after being the sixth overall pick in the draft after COVID-19 eliminated in-person practices. Last year, he was getting up to speed and building a relationship with coach Brandon Staley and offensive coordinator Joe Lombardi.

Now, it is picking up where last season left off in some respects.

“I think the biggest thing is understanding that we’re miles ahead of last year,” Herbert said. “Last year, we were focused on calling the right plays in the huddle and getting lined up on the field. We also have tons of film to look back on last year. We’re farther ahead of where we thought we would be.”

Even with learning a new offense throughout the season, Herbert set franchise records with 5,014 passing yards and 38 touchdowns last year en route to making his first Pro Bowl. That came after he was the Associated Press Offensive Rookie of the Year in 2020.

Without diving into a new playbook, Herbert said his biggest point of emphasis throughout the offseason has been working on his footwork, especially five- and seven-step drop-backs after being under center. He has also tried to understand the run game better and pass protections.

“His balance and body control is something that he does very well, especially for a young player. When he has his feet in a good position, he’s already one of the special passers in the league, but I think there’s a confidence that comes when his body’s in the right spot,” Staley said. “He’s been working hard with (quarterback coach) Shane (Day) on his fundamentals and really solidifying that.”

The one thing Herbert is trying not to focus on is expectations. While Herbert has piled up individual accolades, the Chargers have not made the playoffs since 2018. They were 9-8 last season and lost three of their final four games.

“I think we focus on ourselves. We’ve done a good job of eliminating that extra noise,” he said. “There are going to be a lot of things said about the AFC West. We’re going to do our best to focus on this house and what we’re doing inside of it. If it’s not coming from a coach, a teammate, family member, we aren’t going to pay too much attention to it.”

While Herbert was on the practice field, some of his teammates were not there for the optional session. Outside linebacker Joey Bosa and running back Austin Ekeler aren’t expected to arrive until closer to the start of the mandatory minicamp in three weeks.

New cornerback J.C. Jackson, who signed a five-year, $82.5-million contract early in free agency, missed Monday because of a travel issue but should be back this week.

Defensive tackle Jerry Tillery also wasn’t in attendance. The 2019 first-round pick did not have his fifth-year option picked up and is on the roster bubble going into training camp.