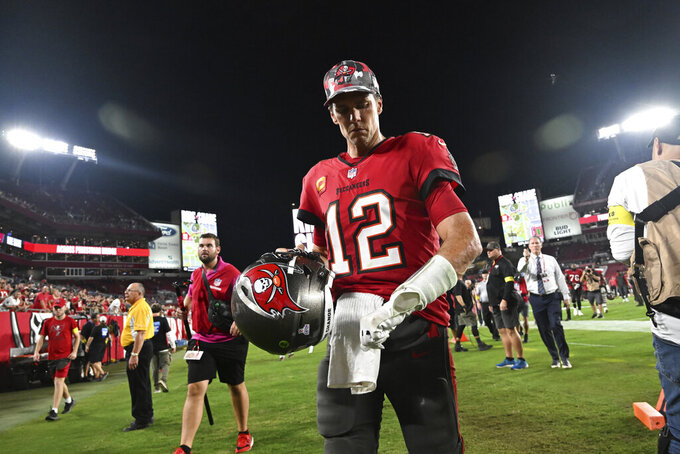 TAMPA, Fla. (AP) — Tom Brady sat in front of his locker in full uniform for several minutes, his head buried at times in his hands.

The Tampa Bay Buccaneers have lost five of six games following a 2-0 start, their 45-year-old quarterback has lost three straight starts for the first time in two decades, and no one professes to have a quick or easy fix.

“I don’t think anyone feels good. ... But we haven’t earned it,” Brady said from a podium later Thursday night, reflecting on a 27-22 loss to the Baltimore Ravens. “We’ve got to go earn it. ... You’ve got to fight hard and figure out how to win games.”

The Bucs (3-5), held to a touchdown and five field goals the previous two weekends during surprising losses to the struggling Pittsburgh Steelers and Carolina Panthers, played better in spurts against the Ravens, though not well enough to come close to pulling out of their tailspin.

The final score didn’t reflect Baltimore’s dominance, particularly in the second half when Lamar Jackson was perfect passing (8 of 8 for 94 yards and two touchdowns), and the Ravens ran for most of their 231 yards rushing.

The Bucs offense scored a touchdown in the opening quarter for the first time, but costly mistakes and an inability to sustain drives prevented the unit from building on the 10-3 lead Tampa Bay held into the second half.

Once the Ravens began to run the ball consistently, the defense had no answers for stopping Jackson, Gus Edwards, Kenyan Drake and Devin Duvernay.

Brady, who is two games under .500 for the first time in a 23-year career, became visibly frustrated as the game gradually slipped away.

“I think we struggled pretty much at everything,” the seven-time Super Bowl champion said.

“Nobody is pointing a finger at Tom Brady. It’s the whole team,” receiver Mike Evans said. “It’s a team game — the ultimate team game — not just one player. It never has been.”

Coach Todd Bowles on Thursday night seemed to suggest he might consider some staffs changes before the Bucs play again a week from Sunday, concluding: “When you are not playing well, everything is on the table.”

The coach’s tone shifted Friday, when Bowles said he and his staff will meet over the weekend to discuss whether changes are needed schematically.

“We own our record at 3-5. We lost (Thursday night). We understand we lost. We played hard. (There’s) no consolation in playing hard. We’ve got to get better. We can only fix it,” Bowles said.

With the offense continuing to struggle to sustain drives and score touchdowns, and the defense seemingly stuck in reverse, too, kicker Ryan Succop and rookie punter Jake Camarda arguably have been the team’s most consistent players. Succop booted three more field goals Thursday night and is 19 of 20 this season, including 9 of 9 beyond 40 yards. Camarda, a fourth-round draft choice, has a 41.3 net average on 38 punts and forced opposing offenses to begin possessions inside their own 20-yard line 12 times.

Four days after yielding 173 yards rushing to Carolina, which started its third-string quarterback and had traded star running back Christian McCaffrey earlier in the week, the Bucs defense had even more difficulty stopping the Ravens.

Second-year pro Nick Leverett made his first NFL start against the Ravens, filling in for injured rookie Luke Goedeke at left guard. “Fundamentally he can be a little bit better, but he played hard and I think he played tough,” Bowles said, assessing Leverett’s play.

Brady isn’t getting much help from the running game, which ranks last the NFL. The Bucs ran for 44 yards on 15 carries, averaging just 2.9 yards per attempt against the Ravens.

LB Shaquil Barrett tore an Achilles tendon during the second half Thursday night and will miss the remainder of the season. ... WR Julio Jones (knee) played for the first time in four weeks, finishing with two receptions for 21 yards and his first TD of the season. “After the game he was OK. Again, I’ve got to wait and see today and (Saturday) how it really holds up,” Bowles said.

Zero — Takeaways by the Bucs defense over the past four games.

Players will have two days off before reconvening to begin preparations for hosting the defending Super Bowl champion Rams on Nov. 6.