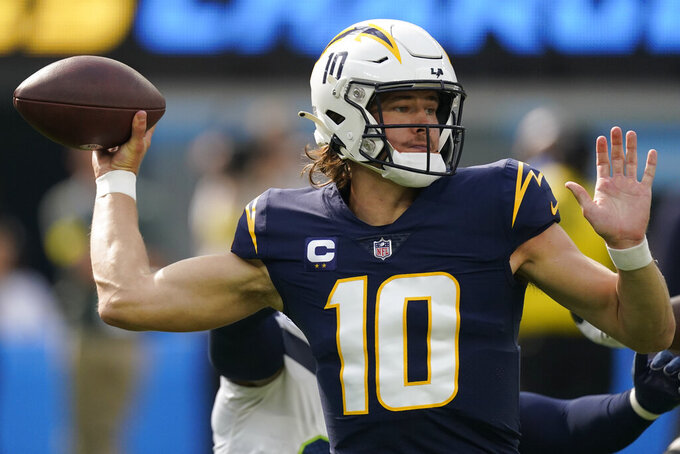 TURNOVER DIFFERENTIAL: Chargers plus-2, Falcons plus-1.

CHARGERS PLAYER TO WATCH: RB Austin Ekeler leads NFL running backs with 53 receptions. He has 22 in the past two games and could become the first back in league history with three straight double-digit reception games. He is tied for second with eight touchdowns (five rushing, three receiving) and is the only player in the league with at least one rushing touchdown and one touchdown reception in multiple games this season (three).

FALCONS PLAYER TO WATCH: QB Marcus Mariota's passing numbers are on the rise, though this is still a run-first offense. Mariota has completed 55 of 80 passes for 653 yards with seven touchdowns and two interceptions in the past four games. His 112.1 passer rating in that span is the fifth highest in the league.

KEY MATCHUP: Falcons RB committee vs. Chargers run defense. Thanks in part to the dual-threat production from Mariota, the Falcons are the NFL's first team to have four players rush for at least 250 yards through the first eight games of a season. The Chargers rank only 27th against the run, and the Atlanta running game could be boosted by the possible return of Cordarrelle Patterson from injured reserve. Patterson returned to practice on Wednesday after missing four games with a knee injury. Rookie Tyler Allgeier and Caleb Huntley have shared the lead role at running back the past four games.

SERIES NOTES: The Chargers have won the past two games in the series after dropping eight of the first nine. Los Angeles won the previous game played in Atlanta, 33-30 in overtime, on Oct. 23, 2016.

STATS AND STUFF: Los Angeles is 4-1 in games in the Eastern time zone in Brandon Staley’s two seasons as coach. ... QB Justin Herbert needs 21 completions to set the record for completions through a player’s first three seasons, breaking the mark held by Andrew Luck (1,062). ... Herbert has been sacked on only 3.1% of his dropbacks, the lowest rate in the league (10 sacks allowed). ... TE Gerald Everett has at least five catches in three of the past four games. ... The Chargers defense has allowed 16 plays of at least 30 yards, tied for second most in the league. ... LB Khalil Mack is tied for seventh in the league with six sacks. ... The Falcons offense has gained at least one first down on 87.8% of possessions. It is the third-highest average in the league. ... Huntley led the Falcons with a career-high 91 rushing yards last week. ... TE Kyle Pitts is looking for his third consecutive home game with a TD catch. Pitts had five catches for 80 yards and his second TD of the season last week. ... WR Drake London is tied for third among NFL rookies with his team-leading 30 catches. ... WR Damiere Byrd has four catches for 142 yards and two TDs the past two weeks.

FANTASY TIP: Don't be afraid to look deep into the Chargers wide receivers group for fantasy value against the Falcons depleted secondary. With Allen's status uncertain because of his hamstring injury and Williams out with an ankle injury, Palmer could be in line for a big game after being cleared from concussion protocol and being listed as probable. The Falcons rank last in the league in pass defense.