Herbert hopes week of preparation benefits him in 2nd start 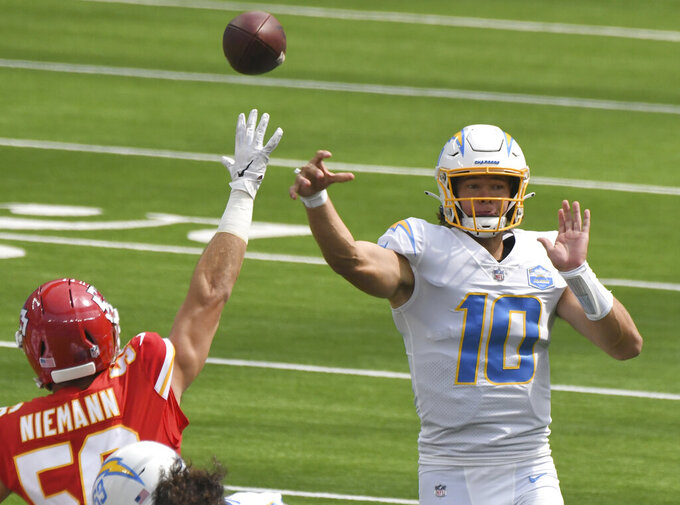 COSTA MESA, Calif. (AP) — Justin Herbert proved last week that he could excel when being put into a game on a minute's notice.

His task now is to show what he can do with a week to prepare as the starter.

The Los Angeles Chargers' rookie quarterback will get his second NFL start Sunday against Carolina with Tyrod Taylor sidelined indefinitely due to chest and rib injuries.

Herbert said he spent the week leading up to the Kansas City game preparing as if he was going to play in case Taylor was injured during the game. It turned out Taylor suffered a rib injury during the Sept. 13 opener against Cincinnati and ended up not being able to play against the Chiefs after a doctor accidentally punctured a lung while giving Taylor an injection.

Despite limited snaps with the first team, Herbert completed 22 of 33 passes for 311 yards, factored in both touchdowns (one passing, one receiving) and had an interception in the 23-20 overtime loss. The sixth overall pick in April's draft became the ninth QB since the merger to pass for over 300 yards in his NFL debut.

“I think just finding out quickly like that and getting in there, I think it’s huge because you just got to focus on executing. But had I known for a week, I think having team reps and things like that would have definitely helped,” Herbert said after Friday's practice. “I think one of the best things is last week we we spent time preparing like I was the guy. I think that’s one of the best parts of what I did last week. And so this week, not changing too much.”

Besides going over more specific in-game scenarios, Herbert said he has concentrated on building a better rapport with receivers Keenan Allen and Mike Williams along with tight end Hunter Henry. He got to work with them during training camp, but the interactions the first two weeks of the season were limited.

Herbert said there were a couple passes for Williams that he should have thrown earlier so he had more room to separate and go up for the ball. All things considered, Herbert did a good job most of the time of getting the ball in the right places. Of Herbert's 311 yards last week, 185 were by receivers after the catch.

Coach Anthony Lynn said Herbert has always been good mentally when it comes to knowledge of the playbook, but that he feels more comfortable now that he has seen Herbert run through most of the plays in practice.

“We're very pleased where he is at. I'm excited to see him play,” Lynn said.

Herbert will be looking to become the third QB since the merger to pass for 300 yards in his first two games, joining Cam Newton and Kyler Murray. Herbert will be facing a Carolina defense that has yet to post a sack this season.

Notes: Besides Taylor, DT Justin Jones (shoulder) and LB Asmar Bilal (calf) have also been ruled out. DE Melvin Ingram (knee) did not practice Friday and is listed as doubtful. Lynn said Ingram had knee soreness and was hopeful he could play. ... The Chargers are likely to bring up a linebacker from the practice squad for depth. Nick Vigil (groin) is doubtful and has not practiced all week.