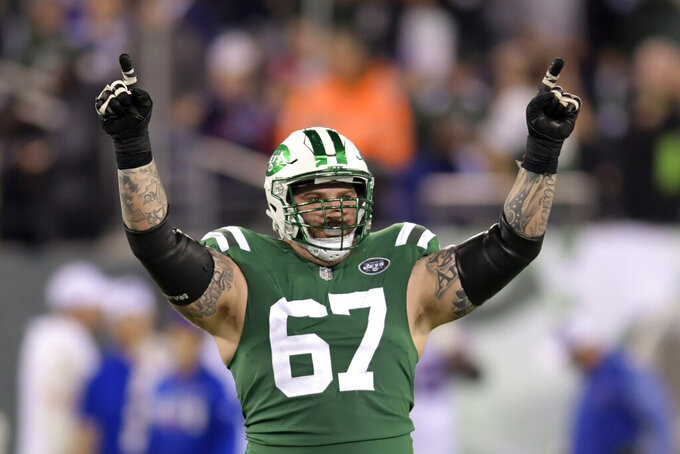 Herndon broke a rib in the Jets' 34-27 victory over the Giants on Sunday, while Winters dislocated a shoulder.

Herndon being placed on IR ends what has been a rough season for the second-year tight end. He was suspended the first four games for violating the NFL's substance abuse policy after he pleaded guilty last January to driving while intoxicated in New Jersey in June 2018.

A few days before he was scheduled to rejoin the team, Herndon injured a hamstring while working out on his own and was forced to miss four more games. He was active at Miami on Nov. 3, but wasn't yet healthy enough to play. Herndon then finally made his season debut against the Giants and caught one pass for 7 yards, but was injured early in the victory.

For Winters, it marks the second time he has injured a shoulder since training camp. He missed a few weeks with the injury in August, but recovered in time to open the season on the starting offensive line. Coach Adam Gase said Monday that Winters "re-dislocated" his shoulder and was contemplating surgery.

The 28-year-old guard is due to count $7.5 million on the salary cap next season, the final year of his contract. He was a third-round pick of the Jets in 2013.

Bello returns to New York after being cut by the team last week. He previously spent time with Cleveland, Arizona, Philadelphia, Houston and Green Bay over the past two years.

Brown was among the Jets' final cuts in the summer and was signed to the practice squad on Sept. 1. He signed with New York in May as an undrafted free agent out of Akron.