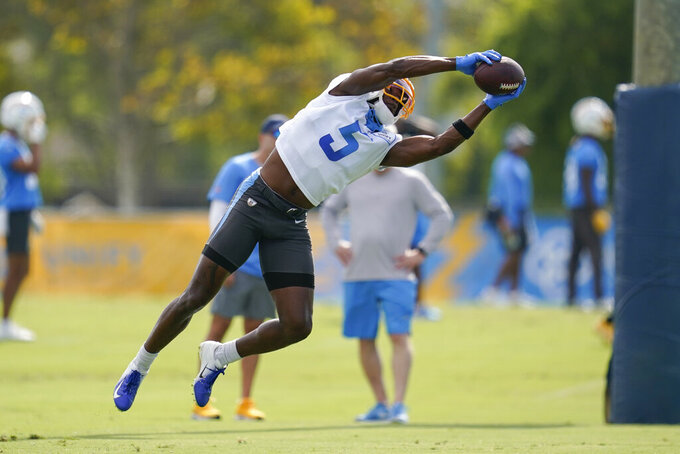 Palmer has emerged as the team’s third wide receiver for when the regular season opens on Sept. 11 against the Las Vegas Raiders. After being drafted in the third round last year, Palmer showed consistency over the final five games, with 18 of his 33 receptions and three of his four touchdowns coming during that span.

"I feel like I’ve learned a lot more, just at the receiver position,” Palmer said. “Within the offense, it’s slowing down because I know where players have to be. Now, it’s just the little things of where you have to end up.”

“Your first year, as the offense gets installed, there’s a volume aspect that can overwhelm a rookie. I think that part, he’s through that hurdle so that he can really go out and play fast,” Lombardi said. “He’s another guy we keep saying I think we can get involved more.”

It also doesn’t hurt that Palmer frequently worked out with Keenan Allen during the offseason and watched plenty of video of Allen’s first nine seasons in the league.

Before Tuesday’s practice, Palmer showed Allen a play from 2018 and asked him what he was thinking when making a particular release off the line.

“I’m looking for how he gets off the ball, how he releases, his top of the route, his in-between the route. It’s pretty much unmatchable,” Palmer said. “If I could get as close as possible, I’ll be good. Just add it to my game and what I have."

Palmer also said he watches film of Tampa Bay’s Julio Jones to see how he comes off the ball and how fast he comes to a complete stop. He has also studied tape of Antonio Brown to refine his technique on over-the-shoulder catches.

Allen, who is in his 10th season, said Palmer showed plenty of potential last season but that he has noticed him making more moves on releases and finding different ways to get open.

“It’s slowing down a lot. Now, it’s the little things like alignments or exact spots on the field that I’m supposed to end up at,” Palmer said. “For the most part, I know what everyone has, which is one less thing to worry about."

With opposing secondaries keying in on Allen and Mike Williams, Palmer should become a more consistent threat. The Chargers will also be counting on Jalen Guyton and DeAndre Carter to expand the passing attack.

Palmer may also have a role on special teams. He has been taking snaps at the gunner position on punt coverage.

Palmer could see limited action in Saturday’s preseason opener against the Los Angeles Rams. The Chargers have 10 receivers on the roster, so most of his snaps could come on special teams.

“He’s playing with a lot more confidence and physicality. I think you can feel him more on the routes,” coach Brandon Staley said. “His route set-up, and then that physicality on the catches, is showing up. He can line up at different places and beat press coverage. Our quarterbacks trust him.

“We feel like he’s a complete receiver. He needs to continue to improve. He has to earn it. He’s off to a good start. He’s also much improved on special teams, which we need because he has the perfect body to be good at it.”