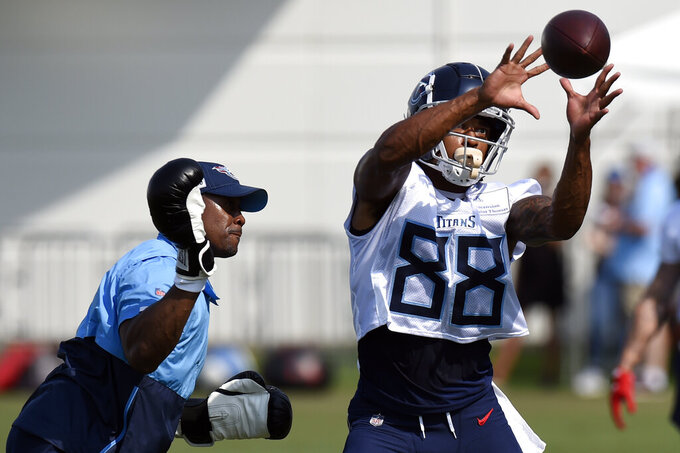 FILE - In this July 30, 2021, file photo, Tennessee Titans wide receiver Marcus Johnson (88) catches a pass as he runs a drill during an NFL football training camp in Nashville, Tenn. Johnson’s fourth NFL team might wind up being the right fit. The Titans are looking for wide receivers to play with Julio Jones and A.J. Brown, and the 27-year-old Johnson just keeps making catches and working his way up the depth chart. (AP Photo/Mark Zaleski, File)

NASHVILLE, Tenn. (AP) — Marcus Johnson never doubted how much the Tennessee Titans liked him. Not even when they traded for seven-time Pro Bowl wide receiver Julio Jones.

The Titans had reached out too many times before signing him to the practice squad in January and then to a contract March 9. The June trade for Jones did not shake Johnson's confidence after what he saw as genuine interest in his skills and opportunity from the team.

“I know what adversity looks like,” Johnson said. “I know this league. I know myself and what I can bring. So ... it just brings the best out of me.”

Johnson's fourth NFL team might just wind up being the right fit. The Titans are looking for wide receivers to play with Jones and Pro Bowler A.J. Brown, and Johnson, who just turned 27, keeps making catches and working his way up the depth chart.

He currently backs up Jones on the preseason depth chart and started the preseason opening win in Atlanta with both Jones and Brown watching along with all the Titans' other starters on offense.

“I've been in similar situations,” Johnson said. "My second year in Philadelphia, we brought in Alshon (Jeffery), Tory Smith and then we drafted two guys and I'm an undrafted second year player coming from the practice squad. And by the grace of God (I) made t he roster that year.

Johnson has taken advantage of his experience and the extra reps with Jones not practicing over the past couple weeks to make an impression.

“He has been one, durable because he has been out there every day, been available,” Vrabel said. “He has gotten better, whatever mistakes he makes he quickly corrects and usually rarely makes the second mistake twice. I would say that is a good model that we should all look at for training camp.”

The Titans have plenty of competition at wide receiver. They signed Josh Reynolds as a free agent after four years with the Los Angeles Rams, then drafted Dez Fitzpatrick in the fourth round and Racey McMath in the seventh round. They also have Cameron Batson and Nick Westbrook-Ikhine who've been with the Titans.

A native of Clear Springs, Texas, the 6-foot-1, 207-pound Johnson went undrafted out of Texas. He signed as a rookie free agent with Philadelphia in May 2016 only to spent parts of that season on the practice squad. In 2017, the Eagles signed both Alshon Jeffery and Torrey Smith.

Johnson made the roster that season, winning a Super Bowl ring after playing in 10 games.

The Eagles traded him in March 2018 to Seattle, then the Seahawks traded him to Indianapolis that September. He played in 24 games with the Colts, including a couple stints on the practice squad, and caught 37 passes for 634 yards and three TDs.

But the Colts waived him for the final time Jan. 2, and the Titans signed him to their practice squad four days later.

Johnson is enjoying being with easily the most talented receiving corps he’s been a part of in the NFL.

“And it beings the best out of me. I know that for a fact,” Johnson said. That’s why when we brought in Julio and obviously everyone else we already had and then the two draft picks, you look at it and you like, ‘Cream rise to the top.’”