Lions likely looking for help on defense with No. 2 pick 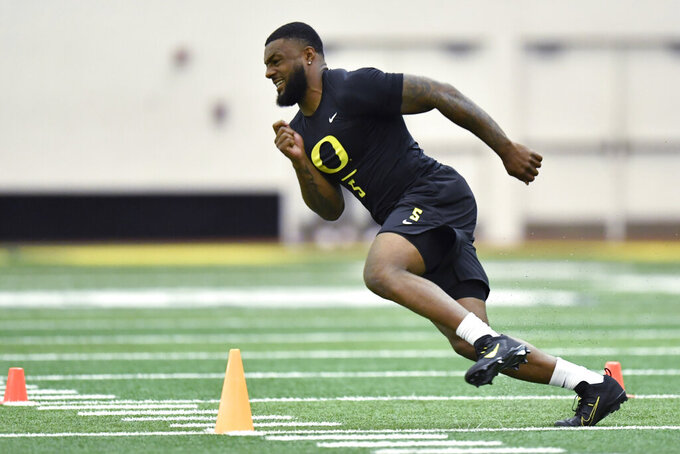 DETROIT (AP) — The Detroit Lions have been so bad in recent years, winning an average of four games since 2018, that they desperately need an influx of talent at a lot of positions on both sides of the ball.

The Lions are going into the NFL draft with the No. 2 pick, the last slot in the first round, and eight selections overall.

Detroit's defense seems to have more needs than its offense, with problems on the line, at linebacker and in the secondary.

When the Lions have the ball, they have a chance to be at least OK with veteran quarterback Jared Goff surrounded by solid players on the line, at tight end and running back.

What Detroit will do, however, with its first pick is a mystery after Jacksonville likely takes former Michigan star Aidan Hutchinson.

At least one former NFL general manager can make the argument for the Lions selecting LSU cornerback Derek Stingley Jr. to bolster their defense.

And even though the offensive line is already the team's strength, the Lions might want to strengthen it even more by taking North Carolina State's Ikem Ekwonu.

Second-year general manager Brad Holmes, of course, was not interested in shedding too much light on any of his thoughts before the draft kicks off Thursday night with the Jaguars going on the clock first, followed by Detroit.

“We do have it narrowed down, and we feel confident where we’re at with how we have it pared down."

Detroit averaged just 1.8 sacks last year, finishing ahead of only Atlanta. The lack of a pass rush led to the Lions giving up 5.9 yards per play and 27.5 points per game, two more categories in which they ranked No. 31 out of 32 NFL teams.

As much as Hutchinson would be a great fit on the field, and in the community as a hometown guy and former Wolverine, the Jaguars will probably take him off the board. If the Lions want to improve their chances of affecting quarterbacks, Walker or Thibodeaux should be able to help right away. Thibodeaux was a college teammate of offensive tackle Penei Sewell, whom Detroit drafted No. 7 overall last year.

Former Tampa Bay general manager and SiriusXM analyst Mark Dominik said if Hutchinson is not available, he would take LSU cornerback Stingley if he was in charge of Detroit's draft. Dominik said that even though the Lions invested a lot in that position, selecting former Ohio State star Jeff Okudah with the No. 3 overall pick in 2020.

Okudah had a season-ending Achilles tendon injury last September after injuries limited him to nine games his rookie year.

Dominik said another direction Detroit could go, if Hutchinson isn't available, is taking Ekwonu. The team would probably move him from tackle to the inside on a line that includes Sewell and Taylor Decker at tackle, and 2020 Pro Bowl center Frank Ragnow.

“You could put (Ekwonu) at guard and he could have a gold jacket," Dominik said, suggesting he would potentially become a member of the Pro Football Hall of Fame. “You could put him at tackle, and he’s still going to play 10 years.”

The Lions struggled to stretch the field in the passing game last season because wide receivers failed to get separation, and throwing deep is not one of Goff's strengths.

With the last pick in the first round, which Detroit acquired from the Los Angeles Rams as part of the Matthew Stafford trade, the team could try to help one of its weaknesses. Drafting a wide receiver such as Georgia's George Pickens or Christian Watson of North Dakota State is a possibility at the end of the first round, or early in the second.

Holmes said he has not had many calls from teams inquiring about what it would take to acquire the No. 2 pick overall.

“I do think there’s a possibility for some more chatter and some more dialogue could increase," Holmes said. “But right now, there hasn’t been a whole lot.”