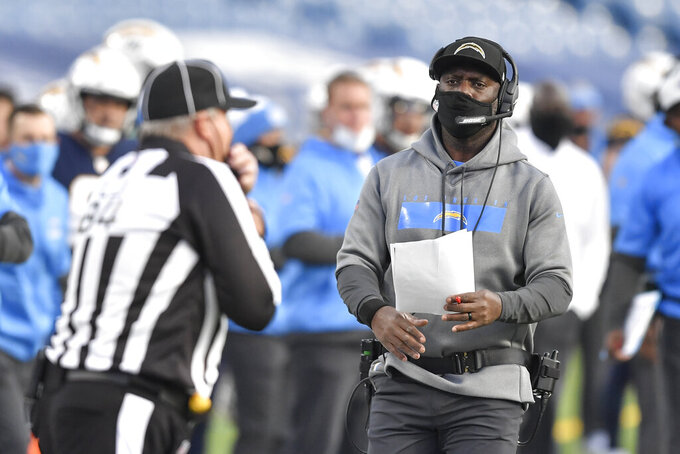 Anthony Lynn has been at three places where a coach has buried a football at the practice field after a putrid performance or disastrous loss.

He will not go that route following the Los Angeles Chargers' worst loss in franchise history.

“We can't even meet together,” Lynn said about any notions of burying a football or burning the tape following a 45-0 drubbing by the New England Patriots.

The fourth-year coach, along with his players, are looking to quickly move on. Sunday's loss was the first time since 1999 and only the third time since the merger that a home team has been blanked and lost by 45 points or more.

The loss is another low point for a team that tied for the AFC's best record two years ago. Los Angeles is 8-20 since the start of last season, which is the fourth-worst mark in the conference. The Chargers are 3-9 for the first time since 2015 and only the fourth time in franchise history.

“There are a lot of problems that would cause us to get beat 45-0, but I don’t have the answers right now," defensive end Joey Bosa said.

The multi-season struggles have also fueled speculation about Lynn's future and if the recent loss could lead to his departure. Lynn though appears to be safe until the end of the season when owner Dean Spanos will evaluate Lynn's future as well as general manager Tom Telesco's.

“I’m having a down year, and I understand people want to take shots and be critical. That’s to be expected,” said Lynn, who has a 30-32 mark as LA's coach.

“I think I’m the guy to get this back on the right track, so I want to evaluate everything in starting with myself. I’ve got a lot of confidence in myself because a lot of people have confidence in me.”

One area where Lynn will have to make more changes over the final four weeks is on special teams. He demoted coordinator George Stewart on Nov. 25 and said he had three coaches, including himself, coaching the unit, but Sunday’s performance was woeful.

Lynn, a former special teams coach, said he is considering taking on coaching the entire unit himself.

“It’s gonna be hard to do, but I just know throughout the week it is not fair to my assistants to bounce around voices in the room and on the field and then I turn it off to them on game day. I don’t think I did them justice yesterday,” he said.

Keenan Allen continues to lead the league in receptions (90) and catches on third down. Allen has 28 receptions on third down this season, which is tied for the second most of his career and he is the only player with 100 or more since the start of 2017 with 113.

Everything having to do with special teams.

The punt units allowed two returns of more than 60 yards — including a 70-yard touchdown — a false start penalty, and three times did not have the right number of players on the field (twice with 10, once with 12).

The kicking units had a fumbled kick return, a returner run into a teammate and a holding penalty.

The field goal unit had two missed kicks, including a blocked field goal that was returned for a touchdown.

LB Kenneth Murray. The rookie finally showed why the Chargers traded up into late in the first round to take him with 14 tackles — including 13 solo stops — and his first sack.

LT Storm Norton got the start in place of Sam Tevi but allowed a sack, quarterback hit and got penalized for illegal touching when Justin Herbert tried throwing it away late in the first half.

Tevi missed the game because his wife gave birth to a girl. RB Joshua Kelley is questionable for this week because of an ankle injury.

59.4 — Justin Herbert's passer rating in the past two games. The rookie struggled against the Patriots, completing less than half of his passes and no touchdowns for the first time. He was 26 of 53 for 209 yards and two interceptions.

The Chargers host the Atlanta Falcons on Sunday.