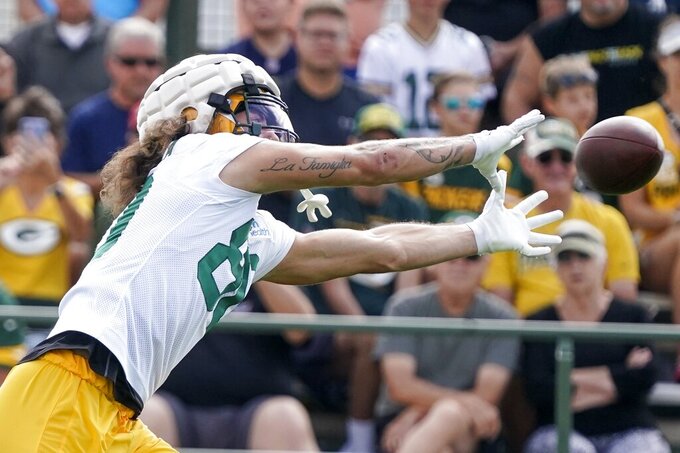 NASHVILLE, Tenn. (AP) — Cornerback Terrell Bonds has talked about being a member of the NFL 's Tennessee Titans since he played in college at Tennessee State.

Five years after his college days ended, he's finally on the Titans' roster as a training camp signee.

“For it to actually come true now, it's crazy and I'm thankful for it,” Bonds said.

Bonds owes his latest football opportunity to the revived USFL where he played 10 games this spring with the Pittsburgh Maulers, and he's got lots of company as the NFL starts its first week of preseason games Thursday night. Bonds is among 42 players from the USFL's inaugural season signed through Tuesday by 26 of the NFL's 32 teams.

USFL MVP KaVontae Turpin now is with Dallas, while All-USFL offensive lineman Cameron Hunt signed with the Chargers and All-USFL tight end Sal Cannella joined the Green Bay Packers. Wide receiver (12) has been the most popular position for NFL teams followed by cornerback (nine) as NFL teams look for help in training camps.

Like Bonds, Turpin has been scrambling to keep his dreams of professional football alive since his college career at TCU ended during the 2018 season. Turpin has bounced from the Fan Controlled Football League, Spring League and finally the USFL before being signed by Dallas for camp.

“Man, it’s like a dream come true. It’s a blessing," Turpin said. "I’ve been in four leagues before I came here. So, it’s a blessing to be here and know the Cowboys gave me a wonderful opportunity to come here and prove myself. I’m just happy to be here.”

Many of these USFL players have been in the NFL before.

Hunt played with both Denver and the Raiders. Bonds played four games with Baltimore in 2020 and spent last offseason with Miami before being waived last August. Darrius Shepherd caught six passes over 2019-20 with Green Bay and signed with Denver after reviving his career with the New Jersey Generals.

“It was really beneficial," Shepherd said of the USFL. "I’m really happy that they put that league on. They did a great job and provided a lot of opportunities for guys as you see people get signed all over the league.”

NFL teams certainly were watching. Not only did 32 officials from the NFL Development Pipeline work USFL games, NFL teams had no issues quickly accessing USFL game tapes so pro scouts could watch breakdowns for any players they liked.

Tennessee general manager Jon Robinson said their pro staff had specific teams to evaluate and grade and met to rank those players just before the USFL's championship.

The Titans previously had worked out both Bonds and cornerback Shakur Brown, Bonds’ teammate with Pittsburgh who signed with Tennessee a few days before Bonds.

“But then certainly watching the USFL and seeing how they performed or things they needed to work on, it gave us more, I’d guess, comfort knowing that we’re bringing a guy in that’s played football recently,” Robinson said.

Having practiced and played this spring gave USFL players a couple of big advantages over those working out on their own hoping for an NFL team to call. First, they're physically ready for the grind of training camp.

“I just got finished with a whole season so I'm definitely like midseason for me,” Brown said.

For the USFL players who spent three months practicing in pads, a full preseason will take a physical toll that will only grow.

“You just got to be a pro about it,” said Cannella, who was in camp last year with the Miami Dolphins before playing with the New Orleans Breakers this spring. “We all went into that season trying to get to this point right here so we all knew what we signed up for.”

Secondly, these USFL veterans also have recent game tape. Robinson said he had to pull up tape from the 2021 NFL preseason Sunday when he wanted to check out players on his emergency list who didn't compete in the USFL. Robinson knows only too well the value of that list after his Titans used an NFL-record 91 players last season because of injuries.

“I love it when those guys come in, and they just want an opportunity," Robinson said. "We saw that last year ... Hopefully we don’t got to go down that road again this year, but guys were looking for an opportunity. Hopefully these two guys will come in here and seize it, and we’ll see kind of where it goes from there.”

For now, these USFL players are focused on one practice and day at a time trying to make the most of this latest NFL opportunity. They also want to see the USFL continue.

“I know tons of my friends (from) my college who are out of the league right now who should be in the league,” Green Bay wide receiver Ishmael Hyman said. “They need somewhere to go to, so it’s a perfect league for that, like a secondary league to get back in.”