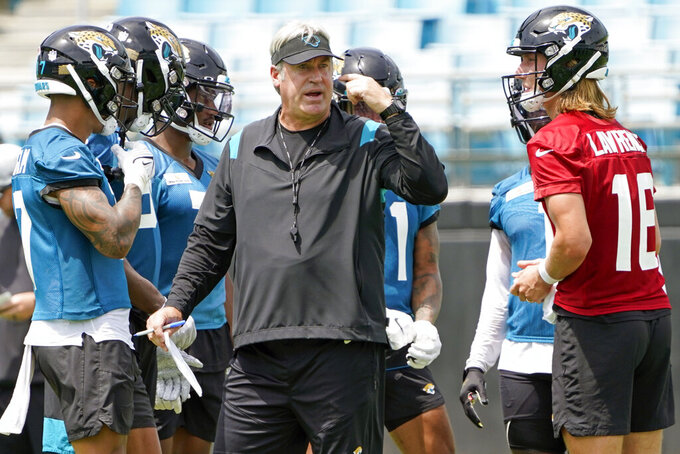 FILE - Jacksonville Jaguars head coach Doug Pederson, center, directs an NFL football practice, Monday, May 23, 2022, in Jacksonville, Fla. At right is quarterback Trevor Lawrence. Pederson is trying to help his players “heal” after last year's tumultuous season and hoping to build a winning culture that could lead Jacksonville out of the AFC South cellar for the first time since 2017. (AP Photo/John Raoux, File)

JACKSONVILLE, Fla. (AP) — Doug Pederson has no interest in being coy. His straightforward approach with the Jacksonville Jaguars has been a welcome respite for players who endured an 11-month fiasco under Urban Meyer.

Among Meyer’s many missteps: having rookie quarterback and No. 1 draft pick Trevor Lawrence split first-team reps with Gardner Minshew; allowing Tim Tebow to try to resurrect his playing career as a tight end; and believing motivational gimmicks would inspire professional athletes, many of them millionaires.

Pederson is going out of his way to get it back. And in the first week of training camp alone, it’s become clear that Pederson isn’t playing games with his guys.

He thrust three rookies — pass rusher and top pick Travon Walker, fellow first-round linebacker Devin Lloyd and third-round center Luke Fortner — into the starting lineup ahead of more tenured players. He benched at least one backup for repeated miscues in team drills. And he waived kicker Andrew Mevis last week after the undrafted rookie shanked a few field goals, including attempts so errant that one hit former Dallas Cowboys coach Dave Campo in the shoulder and two others scattered bystanders nowhere near the uprights.

“It feels good to be a part of a professional locker room, not only in the locker room but also when you talk to the coaches,” pass rusher and team captain Josh Allen said. “It’s a professional setting. ... He’s not getting on us; he’s letting us know what’s real and he’s talking to us like grown men. With that, nothing but respect. We want to grow.”

Pederson, who led Philadelphia to its first NFL championship since 1960 following the 2017 season, made it a point to allow his new team to “heal” after all that went down in Jacksonville in 2021.

He instituted an open-door policy, filled his staff with former NFL players and stayed far away from the college-like ways that eventually annoyed so many players under Meyer. No more music blaring throughout practice. No more emcee directing drills and reminding guys to hydrate. No more charting “winners and losers” for every drill, and catchphrases such as “own it” and “plus-two mentality” are long gone.

Unlike Meyer, Pederson doesn’t require players to jog onto practice fields, doesn’t gather them for lengthy chats before or during workouts, and doesn’t bring in guest speakers.

Pederson treats his young team like a veteran-laden group. For the first time in his coaching career, Pederson is essentially giving players two days off after preseason games, with the second one including a weightlifting session and a walkthrough.

He said recent studies on soft-tissues injuries led him to make the schedule tweaks.

“You draft these guys for a reason, and the reason is they need to play,” Pederson said. “We need the depth. We need the talent. We need maybe possibly to fill a hole. There’s no better time than right now to let them go through a practice and make mistakes, have successes and be able to coach all that right now than say Week 1 or 2 of the regular season, when it’s their first time.”

Pederson’s path has been refreshing for a franchise that has four wins in the past two seasons combined.