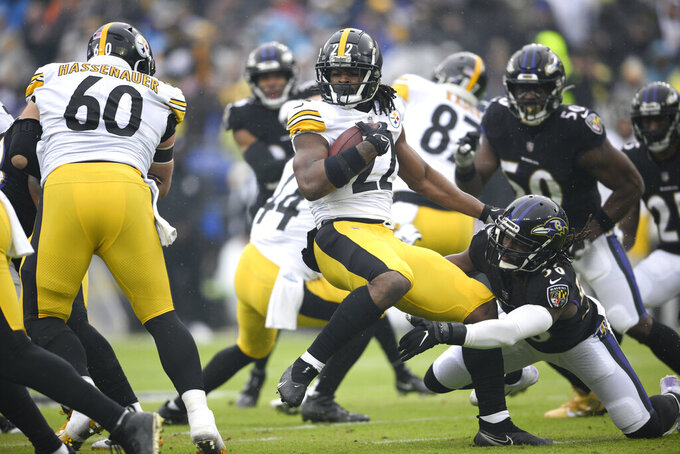 Pittsburgh Steelers running back Najee Harris (22) is hit by Baltimore Ravens safety Chuck Clark (36) while rushing for yardage during the first half of an NFL football game, Sunday, Jan. 9, 2022, in Baltimore. (AP Photo/Nick Wass)

BALTIMORE (AP) — A frustrating season marred by an assortment of injuries and close defeats ended in familiar, agonizing fashion for the Baltimore Ravens on Sunday.

The Ravens played shorthanded — and valiantly — before falling 16-13 in overtime to the Pittsburgh Steelers. It was Baltimore's sixth loss in a row, five of which were decided by a total of eight8 points.

Despite losing three running backs, two star cornerbacks and playing the latter part of the season without injured star quarterback Lamar Jackson, the Ravens remained in the playoff hunt until the very end of this final, excruciating defeat.

“Lot of fight in this team, a lot of heart,” defensive lineman Calais Campbell said. “It’s tough when you give so much energy, so much heart and can’t get it done.”

Weathering a steady rain and a trio of turnovers by second-string quarterback Tyler Huntley, Baltimore (8-9) pulled even in the fourth quarter before nemesis Ben Roethlisberger guided the Steelers on the winning drive in the extra session to end the Ravens' fourth overtime contest of this wacky season.

The first of those overtime games came in the opener, a loss to the Las Vegas Raiders. After that, the Ravens went on an 8-2 tear to become the top seed in the AFC.

Then came a 20-19 loss in Pittsburgh when coach John Harbaugh called for a 2-point conversion that failed with 12 seconds left. It was the first of three successive defeats by a total of four points, part of an 0-6 stretch that marks Baltimore's longest losing streak since Harbaugh took over in 2008.

“We fell short in numerous games down the stretch in the sense that we just couldn’t find a play we needed,” Harbaugh lamented.

And so it was Sunday, when Huntley lost a fumble and threw two interceptions. His final turnover came at the outset of the fourth quarter, a pick in the end zone that cost the Ravens a chance to take a 17-6 lead.

In the end, Roethlisberger and the Steelers came through when it counted.

“They made the plays and we didn’t. Football is as simple as that,” Campbell said. “It hurts.”

Especially because the Ravens would have kept their postseason hopes alive with a win. Baltimore needed an improbable multi-pronged combination of circumstances that began with Jacksonville upsetting Indianapolis, which is exactly what took place while the Ravens were playing Pittsburgh.

“That makes it sting a whole lot more,” Campbell said of Baltimore's collapse. “I was tracking the (Jaguars) game. I saw them go up early and never let up. Those guys gave us an opportunity and it (stinks) that we couldn’t take advantage of it.”

On the surface, six straight losses after an 8-3 start would be devastating. Yet, given the hardship the Ravens endured, there was really no lamenting the outcome.

“We stuck together, nobody pointed the finger, everybody competed the best they could,” Harbaugh said.

Playing a fourth straight game without Jackson (ankle injury), the Ravens took the lead over their AFC North rivals Sunday when Latavius Murray blasted up the middle on a 46-yard run that made it 10-3 early in the third quarter.

But the Ravens would produce only a field goal the rest of the way. Huntley went 16 of 31 for 141 yards, was sacked three times and finished with a humbling 37.2 quarterback rating.

To put that in perspective, teammate Sam Koch had a 39.6 rating after throwing an incomplete pass on a fake punt.

The Ravens can only hope to see more of Jackson, along with injured running backs J.K. Dobbins and Gus Edwards, next season.

“Just watch how we bounce back,” safety Chuck Clark said.