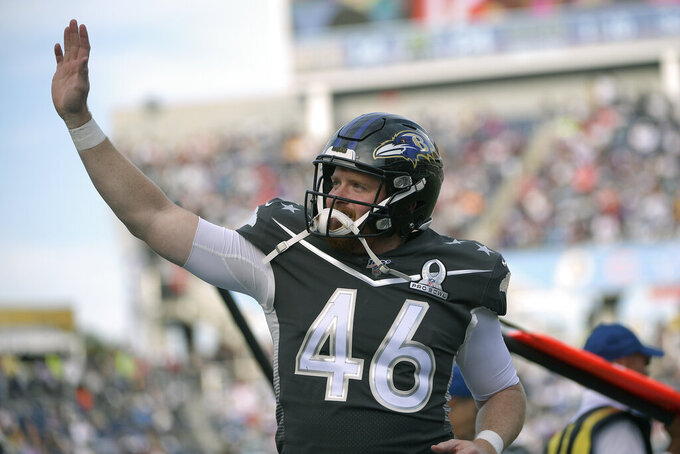 Ravens general manager Eric DeCosta has already started making some of the tough decisions he believes can help Baltimore negotiate the leap from playoff qualifier to Super Bowl champion.

Nick Moore, 28, comes at a cheaper price than Cox, who's been sending the ball back between his legs for 11 seasons. Moore handled the job efficiently in a December game against Pittsburgh when Cox was on the reserve/COVID-19 list.

“It's almost the circle of life at times, and you have to continue to get younger as a team," DeCosta said. “Although it was very, very difficult to move on from Morgan, it was probably something we needed to do long term. Things change. Unfortunately, it's a tough part of this business."

Since taking over for long-time GM Ozzie Newsome, DeCosta has built playoff teams in each of his two years on the job. This season, the Ravens went 11-5 and beat Tennessee in the opening round before losing at Buffalo.

“It was not the end result we wanted," DeCosta acknowledged. “We've all got to do a better job if we really want to take this thing to the next level, which means playing in the Super Bowl. That's our goal, that's our challenge."

This year was difficult for all NFL teams because of the pandemic, perhaps Baltimore more so because an outbreak of COVID-19 within the team contributed to a three-game skid that dropped the Ravens' record to 6-5 before they rallied for a wild-card berth.

“It was a very, very challenging season. A rewarding season as well," DeCosta said. “Proud of the team in that we overcame a lot of adversity."

DeCosta has much to do in the months ahead. Working with a salary cap that has yet to be determined, he'll be looking primarily to shore up the offensive line, add depth in the secondary and get another target or two for quarterback Lamar Jackson.

There might be more cuts before DeCosta can begin to fill out his wish list of players.

“It's hard to say because I don't know what the cap is going to be," DeCosta said, noting that Baltimore is currently around $15-20 million under the current figure. “We'll be strategic, but we do have some players we definitely want to go after."

One priority is to get an extension for Jackson, last season's NFL MVP and the key figure of the league's top-ranked rushing attack. Baltimore also certainly will exercise the fifth-year option on Jackson’s rookie contract by the May 3 deadline if DeCosta doesn't have a new deal in place before then.

“My intention is to keep him in Baltimore for many, many years," DeCosta said.

DeCosta's effort to sign players before their contracts expire was made clear with the extensions he provided in recent months to offensive tackle Ronnie Stanley and cornerbacks Marlon Humphrey and Jimmy Smith.

Despite the disappointment that comes with already working toward next season, DeCosta insists he's already got the nucleus of a team with unlimited potential. With Ingram, Griffin and Cox out of the mix, the list of over-30 veterans on the roster has dwindled.

“We think we have a good foundation of young players. This is a very young team in comparison to Ravens teams of the past," DeCosta said. “There are definitely some areas of the team we want to improve, and we will continue to do that through free agency and the draft."

DeCosta is fully aware that Baltimore had the league's worst-ranked passing game, a shortcoming he attributed in part to the fact that the run-oriented Ravens threw far fewer times than any other team in the NFL.

But he conceded it's an area that must improve for Baltimore to take the next step, especially because speedy Marquise Brown was one of the only deep threats.

“There are a lot of things we can do. It's not all about getting the quote No. 1 receiver that everyone talks about," DeCosta said.