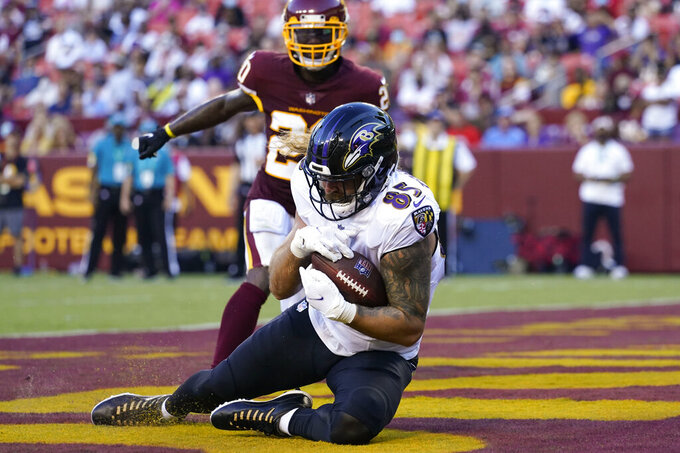 Dobbins injured his left knee, Lamar Jackson made his 2021 preseason debut and Tyler Huntley scored five touchdowns to help the Ravens rout Washington 37-3 Saturday to win their NFL-best 20th consecutive exhibition game. Dobbins' uncertain status is the biggest lingering effect for Baltimore with the regular season on the horizon.

Coach John Harbaugh said Dobbins would undergo tests Sunday but declined to express how concerned he was about the injury. The second-year back was again expected to split carries with Gus Edwards in a run-heavy offense, and Baltimore may now need to get something out of Ty'Son Williams.

“Hopefully we don’t miss him,” Jackson said. “That’s a tremendous back. We have Gus, we got Ty, but hopefully he’s good.”

After catching a screen pass from Jackson, Dobbins went down awkwardly midway through the first quarter on his third touch of the game. He was attended to on the field before being carted off the sideline and ruled out.

Roughly 90 minutes after Dobbins left the field, agent Zac Hiller tweeted: “All I know is @Jkdobbins22 is one of the toughest guys out there. No matter what it is this is only year 2 of 20.”

Jackson played only one series after sitting out Baltimore's first two preseason games. The 2019 MVP was 3 of 4 for 29 yards and was sacked twice on a drive that ended with a missed field goal.

“(It was good) to get my feet wet before the regular season and feel the contact -- real contact,” Jackson said. “Guys in practice are not hitting me or anything like that, so it was great to get my feet wet.”

While the Ravens awaited word on , Huntley tore through Washington's reserves by going 24 of 33 with four touchdown passes and a rushing score. Huntley is the second-string quarterback behind Jackson for now with Trace McSorley unavailable because of back problems.

“It’s just really cool for the guys,” Harbaugh said. “There’s a lot of guys watching on TV with their kids, telling their kids about the fact that they were part of it. That’s the most meaningful thing.”

Green Bay's streak ended with a loss in 1963 to a team of college all-stars and totaled 23 games through that year if only counting NFL opponents — a mark the Ravens would need to go undefeated in the 2022 preseason to match.

Left tackle Ronnie Stanley, an All-Pro in 2019, also saw his first game action since injuring his left ankle Nov. 1 and missing the remainder of last season.

"It’s not much, but it’s something," Harbaugh said of his starters seeing limited playing time. “At least you get out there for a little bit of work. That’s what we were hoping for before we get into the regular season. We knew they weren’t going to get a ton of plays. It’s not worth it.”

Washington's Ron Rivera took it a step further, sitting all his starters.

“We didn’t want to get anyone hurt," Rivera said.

With presumptive starter Ryan Fitzpatrick and backup Taylor Heinicke getting the night off, Kyle Allen got the nod at QB and completed 10 of 22 passes for 100 yards before giving way to Steven Montez after halftime.

Baltimore rested kicker Justin Tucker and punter Sam Koch and handed those duties to rookie Jake Verity, who was wide left from 40 yards, connected from 25 and had an extra point blocked. Verity made his first three field goal attempts this preseason, including a 53-yarder, and could draw interest around the league.

That could include Washington, now that Dustin Hopkins is 4 of 7 on field goals this preseason. He was good from 48 yards and had a 55-yard attempt deflected before falling well short of the goal posts.

Baltimore was down to 78 players on the roster after completing another trade Saturday, sending veteran offensive lineman Greg Mancz to Miami for an undisclosed exchange of draft picks. The Ravens earlier in the week traded rookie cornerback Shaun Wade to New England for a 2022 seventh-rounder and 2023 fifth-rounder.