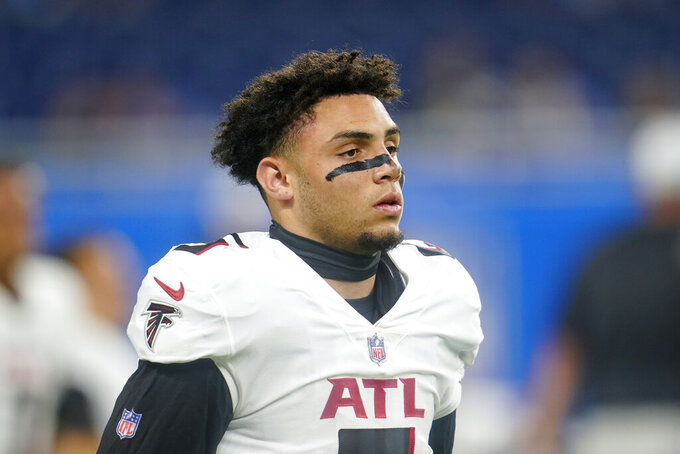 INGLEWOOD, Calif. (AP) — Drake London spent the past three seasons tearing up college defenses for USC, so football fans in his native Southern California weren't surprised when the big receiver got off to a strong NFL start with the Atlanta Falcons.

The Los Angeles Rams fans in that SoCal contingent are hoping their Super Bowl champions can come up with ways to slow down London for just one week when the Falcons visit SoFi Stadium on Sunday for a meeting of teams hoping to avoid 0-2 starts.

London caught 160 passes for 2,153 yards and 16 touchdowns in 27 games at USC before the Falcons made him the eighth overall draft pick last spring. After being slowed by an injury in the preseason, London made five catches for 74 yards in his Atlanta debut last weekend.

“I don’t want to pump his tires and let him get a big head after one game, but Drake is exactly the guy we thought he was when we went out there and worked him out at USC,” Falcons coach Arthur Smith said. “Just a very mature, competitive, strong-minded individual.”

London's speed, grace and tenacity on the ball are already well-known back where he grew up as a two-sport star in football and basketball. London is from Moorpark, California, which is just a few minutes north of the Rams' training complex in suburban Thousand Oaks.

But London is hardly the only problem facing the Rams, who had three extra days to contemplate the disappointment of their season-opening blowout loss to Buffalo on the NFL's opening night. The Bills exposed flaws across Los Angeles' roster, and the same pass defense that must contain London and Marcus Mariota this week gave up 297 yards passing to Josh Allen, with 122 of those yards going to Stefon Diggs.

All-Pro defensive back Jalen Ramsey is taking much of the heat for the Bills' success in the passing game, but the entire secondary is suspect after some offseason roster upheaval in a unit that wasn't dominant during the Rams' Super Bowl run. Los Angeles has a chance to get its defense back in order against Mariota, and the result could be an indicator of what's to come for the Rams this season.

“My confidence in Jalen is unwavering,” Rams coach Sean McVay said. "He’s a great competitor. One of my favorite things about it is that he had great accountability: ‘Hey, I can make some of these plays better.’ (I) have the utmost confidence and faith in Jalen, and I know he’s looking forward to being able to play his kind of game this week.”

The Rams' offense was weirdly out of balance while facing Buffalo's two-high zone pass defense, and they claim they're determined to get the ball into receiver Allen Robinson's hands more frequently this week after he had just one catch on two targets in his LA debut.

Quarterback Matthew Stafford targeted Cooper Kupp 15 times and tight end Tyler Higbee 11 times, while the rest of their teammates got 15 targets combined. Stafford puts the blame on himself.

“I can do a better job getting those guys touches as receivers and getting them in the rhythm of the game,” Stafford said. “I'm always trying to keep those receipts in my head of who's getting the ball.”

The Rams aren’t the only team in this matchup with possible concerns about a standout defensive back. The Falcons had good reason to count on cornerback A.J. Terrell as the foundation of their secondary after he had three interceptions and 16 passes defended as a second-team All-Pro in 2021.

So it was a surprise to see New Orleans Saints quarterback Jameis Winston connect with Michael Thomas on two short touchdown passes against Terrell. The scores helped the Saints rally for a 27-26 win last week, but the Falcons still have confidence in Terrell, who must return to face Kupp, last season's offensive player of the year.

“We’ll take that matchup, and A.J. will be better for it,” Smith said. “Mike Thomas is a good player. He made the play, and it’ll only make A.J. better. We’ve got all the faith in the world in A.J., but that’s the competition in the NFL.”

One week after London's impressive start, another Falcons rookie could be in line for a significant offensive role. Running back Tyler Algier was inactive against New Orleans but could play against the Rams if Damien Williams cannot return from a rib injury.

Stafford's offensive line will look different in Week 2, with center Brian Allen on injured reserve with a knee problem. Right guard Coleman Shelton will slide over to center, where he has played previously — but Stafford's right guard will be Tremayne Anchrum, who got three offensive snaps in his first two seasons.

McVay says he's confident in the untested Anchrum because "I think he’s earned the right. You don’t ever really know until they get out there, but based on this guy’s body of work, his demeanor, his disposition ... I think he’s going to maximize and capitalize on it.”

“They played great,” Patterson said. “I felt like they came together.”