Saints' Thomas returns from injury absence with 'no regrets' 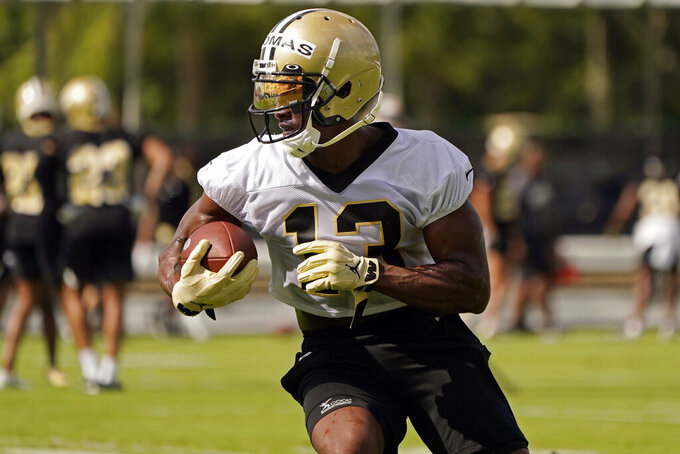 METAIRIE, La. (AP) — After New Orleans Saints top receiver Michael Thomas practiced for the first time in more than a year, he sounded determined to grow from his prolonged struggle to return from a left ankle injury — and was in no mood to consider how he might have handled it differently.

In 2019, Thomas turned in one of the greatest seasons by a receiver in NFL history, catching a record 149 passes for 1,725 yards and nine touchdowns. But his stated hopes of an even more impressive encore in 2020 were quickly dashed when opened a teammate rolled up on his leg while run-blocking in the regular-season opener.

Thomas played in eight more games that season — two in the playoffs — but “was playing injured,” and "was clearly on one ankle,” he said.

A doctor told him he likely could rehabilitate his injury without surgery by the beginning of the 2021 season. He tried that, but wound up having surgery shortly before last's year training camp. While he hoped he could return, he never did, leading to speculation about whether the injury was mishandled by the star receiver or the team.

In Thomas' case, the outcome of the surgery didn't put him on as quick of a rehabilitation timeline as he'd hoped and wound up needing a second surgery last fall.

“You just have to trust it and hope that the person does the right job and then you’ll be able to be out there,” Thomas said. “Control what you can control. And that’s what I’ve been trying to do and make the best of.”

The Saints didn't try to push Thomas to return for the first practice, even placing him on the physically unable to perform list days earlier. But by Wednesday morning, Thomas had met enough physical benchmarks persuade general manager Mickey Loomis, coach Dennis Allen and the training staff that he was ready to run routes and catch passes in pads.

While Thomas did not participate in full 11-on-11 drills, he did do position drills, turning his chest toward arriving passes and reaching out with two hands to authoritatively snatch the ball out of the air.

“I think we’ve still got to be smart with him as we go throughout training camp. But I thought it was a good start,” Allen said, adding, "He wants to help this team win games. And that’s his whole mindset and his whole purpose. He’s extremely driven to do that. And I think this was a good step in the right direction.”

Throughout Thomas' protracted absence, he said he actively sought out advice from pro athletes in whose careers had been interrupted by ankle injuries, such as NFL tight ends Travis Kelce and Zach Ertz and NBA All-Star guard Stephen Curry.

“Sometimes you get dealt a bad hand,” Thomas said. “But everybody loves somebody that comes back from adversity. I feel like a lot of people in this world can learn from that.

“It’s better to have some adversity than not ... just to show how you respond,” Thomas added. "It shows a lot of character. It shows the type of man you are. And I accepted it.

"And I mean, I love playing football. So this is what it is, and I’m back out here. And now, every day, I just have to look in the mirror and ask myself, ‘Am I getting better?'”