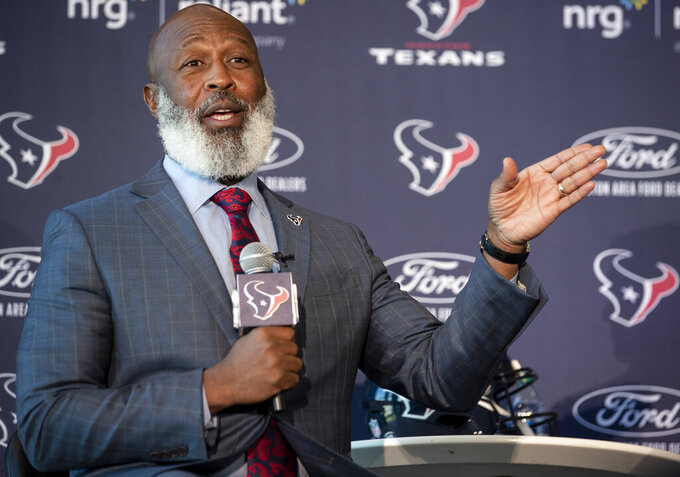 HOUSTON (AP) — Lovie Smith reflected on his past in the NFL on Tuesday as he was introduced as the new coach of the Houston Texans, a hire that made him one of five minority head coaches in the NFL.

“It’s not often you get a chance to lead three professional football teams,” he said. “I don’t know if there’s a guy who looks like me that’s had the opportunity to do that. So that’s pretty special.”

The 63-year-old Smith, who spent last season as Houston’s associate head coach and defensive coordinator, previously coached the Chicago Bears for nine seasons and Tampa Bay for two seasons ending in 2015. He takes over for David Culley, who is also Black, and was fired after one season.

“Coach Smith is one of the most respected figures in the league,” general manager Nick Caserio said. “I think a lot of us were able to see that this year. So, as I worked through this and got to the end point, I realized the best decision and the best opportunity for this organization to move forward was with the choice of Lovie Smith as the next head coach.”

Flores sued the NFL, the Dolphins and two other teams last week over alleged racist hiring practices for coaches and general managers. Flores issued a statement through his legal team Monday night that said in part that the Texans didn’t hire him because of “his decision to stand up against racial inequality across the NFL.”

“There were conversations with Brian after that took place, so that really didn’t affect the process at all,” he said.

Caserio also denied reports the team had planned to hire McCown, who has no coaching experience at any level aside from volunteering with his son’s high school team.

“There were never plans to hire anybody until we came to an end point," Caserio said.

Much of Tuesday’s news conference was devoted to issues of diversity, with Smith joining Tomlin and McDaniel, who is biracial, as the league’s only Black head coaches.

“There’s a problem,” Smith said. “It’s obvious that there is a problem. But what are you going to do about it? There’s a lot of different talk on how what you should do. But I think it always comes down to action.”

Smith noted that he got his NFL start on the staff of Tony Dungy, who is also African American, and said he believes it’s his responsibility to help other Black coaches ascend to the NFL’s top jobs.

Caserio also addressed the lack of diversity among NFL head coaches and what he can do to change things.

“It’s about finding solutions,” he said. “I certainly don’t have all the answers. I can’t even fathom what that answer or solution is, but to be a part of that solution, that’s what we can make a commitment to doing.”

Along with the hiring of Smith, the Texans promoted Pep Hamilton to offensive coordinator. Hamilton, who spent last season as passing game coordinator and quarterbacks coach, takes over for Tim Kelly, who was fired after the season.

Smith announced Tuesday that he would continue to call the plays on defense in his new role.

Now he’s at the helm of a team in the process of a complete rebuild after trading or releasing almost all of its top players in the past couple of years. The Texans went 4-13 last season in a year when star quarterback Deshaun Watson did not play after a trade request and amid 22 lawsuits alleging sexual harassment or assault.

It was the second consecutive season when the Texans finished with four wins after winning the AFC South in both 2018 and 2019.

Smith was asked about his expectations for the upcoming season after two difficult years.

“History tells you can make a quick turnaround,” he said. “I don’t know exactly how many games we’re going to win... but I don’t think it’s a big gap between one and 32. If you get the right people together, you can achieve some great things. We have some pieces in place for us to do well.”

Houston's home crowds were sparse for most of this season. Retired receiver Andre Johnson, who was drafted by the Texans in their second year in 2003, went through many highs and lows in his 12 seasons in Houston. He recalled fans wearing trash bags on their heads during the lean years, and the thrill of the crowd when the Texans made their first playoff appearance in the 2011 season.

“So, it’s very big just to get everybody on board," he said. “I think having coach Lovie Smith here is the right way to get started, and I think with that hire you’ll get some of the fans back. And now it’s just getting the right players in the building and putting a good product out on the field and just going out and performing."