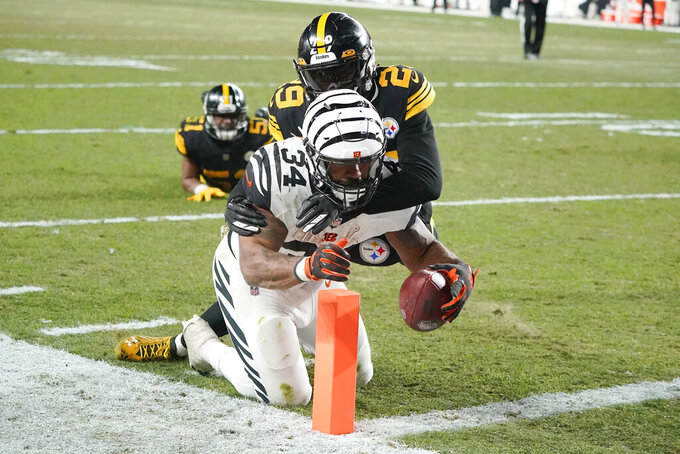 Cincinnati Bengals running back Samaje Perine (34) carries Pittsburgh Steelers cornerback Levi Wallace (29) on his way to a touchdown during the second half of an NFL football game, Sunday, Nov. 20, 2022, in Pittsburgh. (AP Photo/Gene J. Puskar)

PITTSBURGH (AP) — Mike Tomlin chooses his words carefully and intentionally. There's a reason over the summer that he used “dominant” to describe what he expected out of the Pittsburgh Steelers defense in 2022.

It was equal parts challenge and choice. With elite players at all three levels in their prime — from defensive end Cam Heyward to outside linebacker T.J. Watt to safety Minkah Fitzpatrick — Pittsburgh began the season with every expectation that 2021, when the unit finished dead last in the NFL against the run among other issues, was an anomaly.

A torn left pectoral Watt sustained in Week 1 followed by a series of injuries that briefly decimated the secondary scuttled any shot at early season momentum. Yet on Sunday, the unit faltered despite being essentially at full health following Fitzpatrick's return just eight days after an appendectomy.

Yes, Watt added to his career highlight reel with a remarkable leaping-while-getting-blocked interception that set up a field goal. Yet the havoc the Steelers wreaked against Cincinnati in the opener never materialized as Bengals quarterback Joe Burrow essentially did whatever he wanted in a 37-30 victory.

Pittsburgh's defense was outplayed, outsmarted and outworked on a day one of the NFL's worst offenses showed — for a half anyway — tangible signs of progress.

“They had a good game plan for us, clearly,” Watt said. “They were able to move the ball down the field. We weren't able to hold them to field goals and help out our offense.”

It may be asking too much of any defense in the NFL to consistently hold opponents under 20 points. Yet it's the bargain the Steelers were forced to make in the offseason following Ben Roethlisberger's retirement.

Philadelphia, Cincinnati and Buffalo all put up at least 35 points against Pittsburgh. Even the New York Jets managed 24 while winning at Acrisure Stadium in early October.

“We have to be a defense that adjusts,” Heyward said. “If (the opponent) does one thing, they can't keep going back to the well."

Time is running out for Pittsburgh to make something of 2022. While the schedule lightens up considerably down the stretch, the way the Steelers struggle to play complementary football — meaning both the offense and the defense are competent on the same day — it's fair to wonder if it's time to start thinking about 2023.

The running game seems to be gaining traction. Najee Harris ran for 90 yards on 20 carries, including a 19-yard sprint around left end that Harris punctuated by vaulting over Cincinnati safety Jessie Bates at the goal line. It helped that the offensive line was able to generate some push and that Harris identified where the holes were instead of just lowering his head and going blindly forward, as has been his habit at times.

The coaches meeting at halftime. It wasn't just the defense that had issues over the final two quarters. The offense had one first down on its first seven possessions after the break as a 20-17 lead slipped away.

The chemistry between Pickett, rookie wide receiver George Pickens and tight end Pat Freiermuth. Pickett targeted them a combined 18 times (12 for Freiermuth, six for Pickens). Pickett's best play of the day was hanging in the pocket and absorbing a hit while lobbing a 24-yard touchdown pass to Pickens.

The chemistry between Pickett and Diontae Johnson. The Steelers signed Johnson to a $36-million contract extension over the summer and he has largely become an afterthought. Johnson isn't doing much when he gets the ball — he's averaging just 8.9 yards per reception — but he's also not getting it that much. Johnson has been targeted 10 times or less in five straight games, the first time that's happened since the start of 2020.

Backup running back Jaylen Warren (hamstring), reserve wide receiver Miles Boykin (oblique) and center Mason Cole (foot) went down against the Bengals. Their status for next week's visit to Indianapolis is uncertain. Fitzpatrick played all 66 snaps barely a week removed from his appendectomy.

216 — The number of players in the NFL who have caught at least one touchdown pass this season, a list that includes Jets QB Zach Wilson and Texans TE Teagan Quitoriano. Johnson is not one of them.

The Steelers travel to offensively challenged Indianapolis next Monday night. Pittsburgh has dominated the series of late. The Colts offer a chance to get better, but a loss would put the franchise's streak of 18 straight non-losing seasons in serious jeopardy.