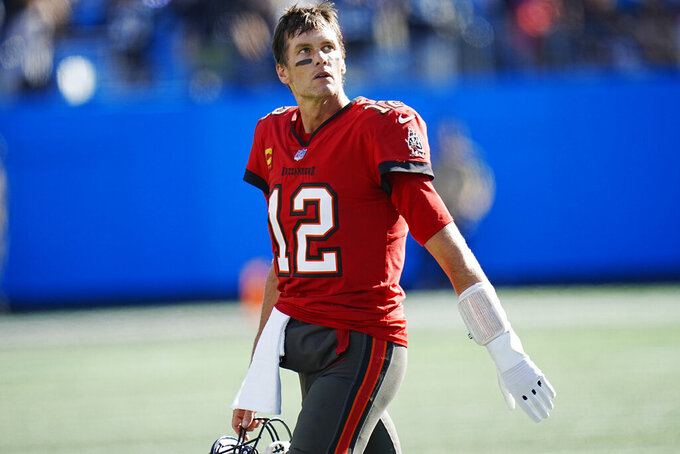 Tampa Bay Buccaneers quarterback Tom Brady (12) looks at the scoreboard after failing to convert a fourth down play in the fourth quarter during the second half of an NFL football game against the Carolina Panthers Sunday, Oct. 23, 2022, in Charlotte, N.C. (AP Photo/Rusty Jones)

BETTING LINE: Ravens by 1½, according to FanDuel Sportsbook.

TURNOVER DIFFERENTIAL: Ravens plus-5; Buccaneers plus-3

RAVENS PLAYER TO WATCH: LB Jason Pierre-Paul. Baltimore signed him last month to help its pass rush, and now he goes up against the team he played for the past four seasons. Pierre-Paul had 33 sacks from 2018-21 for Tampa Bay.

BUCCANEERS PLAYER TO WATCH: Tom Brady leads the NFC in passing yards with 1,492, yet has thrown for just eight touchdowns. He’s 6-2 in eight career regular-season starts against Baltimore, averaging 272.1 yards per game passing with 10 TDs.

KEY MATCHUP: Lamar Jackson vs. a Buccaneers defense that not only has struggled against the run lately, but also has an injury-weakened secondary. The Ravens QB has rushed for 510 yards this season, 59 more than Tampa Bay (451) as a team.

SERIES NOTES: The Ravens have won the past four meetings, including the most recent matchup when Jackson was a rookie four years ago.

STATS AND STUFF: The Ravens had a season-high five sacks against Cleveland. Baltimore is the second team to have three players on the active roster with at least 90 career sacks — Justin Houston, Calais Campbell and Pierre-Paul. The first team to do it was the 1994 Green Bay Packers with Reggie White, Steve McMichael and Sean Jones. ... Baltimore has a takeaway in nine straight games. ... Justin Tucker of the Ravens has 401 extra points, one shy of Matt Stover’s franchise record. Tucker has also made 62 consecutive field-goal attempts in the fourth quarter and overtime. ... Lamar Jackson needs 57 yards rushing to pass Steve Young for fifth on the career list for a quarterback. ... Brady is 14-2 in Thursday games. He’s thrown for 4,779 yards and accounted for 39 touchdowns (35 passing, four rushing) vs. nine interceptions in those 16 games. ... Brady hasn’t thrown an interception since Week 1. His streak of 271 passing attempts without an interception is the longest in franchise history. ... The Bucs are averaging a league-low 64.4 yards per game rushing. Carolina limited them to 46 yards on 16 attempts last week. ... Tampa Bay’s offense hasn’t scored a first-quarter touchdown. ... The defense has gone three consecutive games without forcing a turnover.

FANTASY TIP: Bucs WR Mike Evans is motivated to rebound from dropping a potential 64-yard touchdown pass that set the tone for a stunning 18-point loss at Carolina last Sunday. Brady targeted him 15 times against the Panthers, and Evans finished with nine receptions for 96 yards.