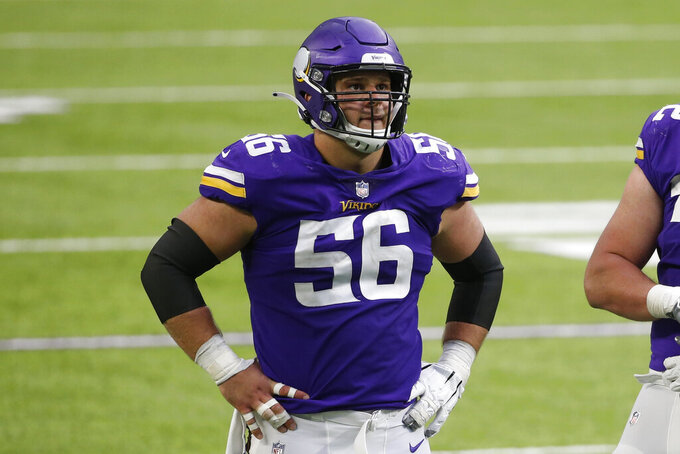 FILE - Minnesota Vikings center Garrett Bradbury (56) plays against the Atlanta Falcons during the second half of an NFL football game, Oct. 18, 2020, in Minneapolis. The Vikings declined the fifth-year option on the contract for Bradbury on Monday, May 2, 2022, sending their 2019 first-round draft pick into the final season of his rookie deal. (AP Photo/Bruce Kluckhohn, File)

EAGAN, Minn. (AP) — The Minnesota Vikings declined the fifth-year option on the contract for center Garrett Bradbury on Monday, sending their 2019 first-round draft pick into the final season of his rookie deal.

Bradbury made 45 starts for the Vikings in three years since he was taken with the No. 18 overall selection out of North Carolina State. He missed two games in 2021 with COVID-19 and lost his starting spot to Mason Cole for two games after that, until Cole was switched to right guard and Bradbury returned to the lineup.

The 6-foot-3, 300-pound Bradbury has struggled in pass protection against bigger defensive tackles but has the lateral mobility to be an effective zone blocker in the running game. He still has the inside track to be the starting center in 2022. Cole signed as a free agent with Pittsburgh.