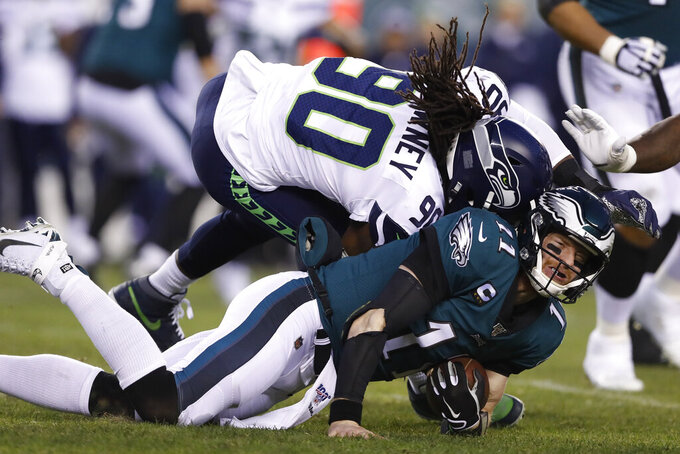 The Philadelphia Eagles’ decision to draft Jalen Hurts in the second round has been one of the most intensely debated NFL topics over the past 10 days.

“I’m excited to add him to the team,” Wentz said Monday. “I know how important the quarterback position is and how important the dynamic is for me and the other guys in that room. I’ve been blessed to have not just incredible quarterbacks but incredible humans and friends in that quarterback room. We really endure a lot together and go through a lot together. ... Excited to add him to the fold and create a really good and healthy competitive, challenging environment for all of us.”

The Eagles picked TCU wide receiver Jalen Reagor in the first round and used the No. 53 pick to draft another quarterback instead of adding another playmaker on offense to help their franchise quarterback. The team then stocked up on speedy wideouts on Day 3, acquiring speedster Marquise Goodwin from the 49ers, and drafting Boise State’s John Hightower in the fifth round and Southern Mississippi’s Quez Watkins in the sixth.

Ohio State running back J.K. Dobbins was on the board when personnel boss Howie Roseman chose Hurts. Dobbins went two picks later to Baltimore, which had the league’s top rushing offense in 2019.

“If I were to start questioning Howie and the management now, I’d really be questioning myself,” said Wentz, who signed a $128 million, four-year contract extension last summer. “When I signed the deal that I did, it was really my way of showing that I trust and believe in what we’re doing in Philly and they trust and believe in me, so I have nothing but confidence and excited to get to work.”

Hurts transferred from Alabama to Oklahoma after losing his starting job to Tua Tagovailoa and was runnerup for the Heisman Trophy last year when he threw for 3,851 yards and 32 touchdowns. The Eagles will look to develop his skills and perhaps use him in variety of ways on offense.

“All I’ve wanted to do is win and stand up there and hold that Lombardi trophy,” said Wentz, who was forced to watch from the sideline when a knee injury ended his sophomore season and Nick Foles led the team to the franchise’s first Super Bowl title. “Whatever that takes and whatever that looks like, I’m on board. I’m a competitor. I want to be out there. I want to have the ball in my hands; we all do. But at the same time, whatever is going to help us win, I’m confident the coaches and everyone is going to put us in the best situation.”

Wentz led an injury-depleted offense to four straight wins in December with a group of receivers off the practice squad and waiver wire. The Eagles won the NFC East title but lost to Seattle in a wild-card game after Wentz suffered a concussion in the first quarter.

“It’s scary stuff,” Wentz said of the concussion. “It kind of changes a lot of things in your brain, and you only get one of these brains and you’ve got to protect it. It was tough to see the finish of that game. That was the end of our season. It was frustrating not to be out there.”

Wentz became a first-time dad last week when his wife, Madison, gave birth to a daughter, Hadley Jayne. He’s been able to spend more time with his family because teams are conducting offseason workouts virtually during the coronavirus shutdown.

Wentz’s AO1 Foundation had to cancel its annual charity softball game that was scheduled for Friday at Citizens Bank Park, home of the Phillies. Instead, his foundation, which already allocated $100,000 toward an initiative for coronavirus relief efforts in the Philadelphia area will host a “day of relief” on Friday. It's a “24-hour virtual fundraising campaign to support its latest initiative, Love From The Crumb.”

“It’s a fun, interactive way to give back,” Wentz said. “To just give grocery boxes to people on the front line, people struggling in need, that’s been fun to see people be blessed during these challenging and difficult time we’re living in.”