Column: Mahomes against Sherman: Who you got? 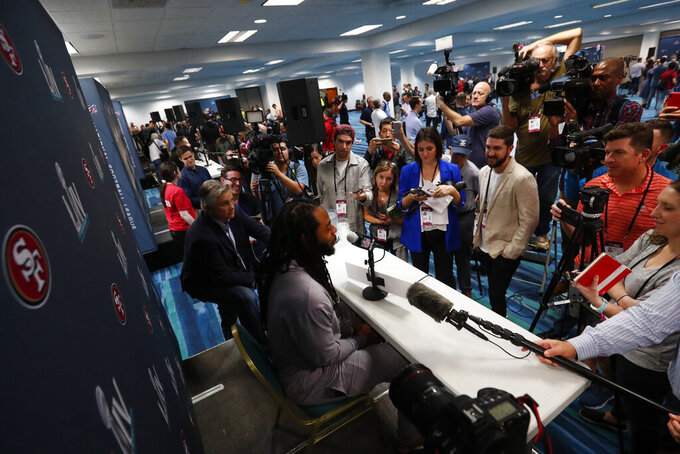 Miami (AP) — Of all the scenarios that could play out in this, the most even of Super Bowl matchups, it just might come down to this.

Patrick Mahomes against Richard Sherman, game on the line in the final seconds. Who you got?

“Anything you want to call it, you name it. I mean he’s got it,” Buckner said of Sherman, his teammate on the vaunted 49ers defense. “I’m just glad he’s on our team.”

Correction, if you will. Sherman isn’t just on the team.

He’s the undisputed face of the team.

That was clear from the moment the 49ers landed in Miami, with their leader front and center, dreadlocks flowing over his sweats and trademark slippers. The days leading up to the Super Bowl are reserved for talking, and Sherman has never been shy when he sees a microphone in front of him.

He mourned Kobe Bryant, saying just the right things when it mattered most. He talked about appreciating his third Super Bowl the most because in the back of his mind he knows it might be his last.

And he got a smile on his face when he told the story of his son being born just days after his second Super Bowl in 2015 and how it means so much to have him here at the game.

“You just pray that one day you can play well enough and have your son see you play at a high level,” Sherman said. “And that’s the biggest blessing of this season is my son’s going to see me play every game and understand and recognize what I’m doing.”

All, though, is not so rosy in Sherman's world as the game approaches. It never is with the Stanford grad, who seems to need to hold a grudge against somebody or something to play better.

So he had a few words about the Seahawks for letting him go. He blasted the NFL for not caring about player safety and told reporters they were complicit by only writing the company line.

He also took time to remind teammates who might otherwise be overwhelmed by everything that happens in a Super Bowl week not to let the moment get to them.

“This is a football game. The rules are the same. The game is the same,” he said. “At the end of the day you look on the field and there’s 22 people on the field going at it.”

Left unsaid is that two of those most important people will be on opposite sides of the ball. And how Sherman affects the unpredictable nature of Mahomes and the Kansas City passing game could decide whether he adds a second ring to his collection in his third Super Bowl.

Mahomes is well aware of what he has to deal with in the 6-foot-3 corner who often turns up in spots a quarterback least expects.

“Obviously he’s physically extremely gifted," Mahomes said. “It’s a lot of size and speed. He has great technique. But I think the biggest thing is how smart he is and how he’s able to really understand the whole scheme and not just his position.”

Understanding the entire game is one thing that separates Sherman from most cornerbacks. He was converted from wide receiver at Stanford (he’s still not on speaking terms with former coach Jim Harbaugh) and quickly developed a reputation as a pro in Seattle as a defender to stay away from.

After a tentative first season back from an Achilles tear in San Francisco he dominated again this year, leading the 49ers with three interceptions and 11 pass break-ups even while opposing quarterbacks tended to throw to the other side of the field.

The biggest stat, though, might be that he’s 10-4 in playoff games in his career, with interceptions in both playoff games this year.

If not for an ill-advised decision to pass the ball on the goal line in Seattle’s 2015 loss to New England, he would be going for this third Super Bowl ring in Miami.

Not that it necessarily matters, Sherman explained to the media which seemed as overwhelmed as an opposing offensive coordinator with his volume of words for the week.

It was Sherman being Sherman, and notebooks were filling up fast.

“I’m one of those people who doesn’t really subscribe to the notion that playing in a Super Bowl really helps you in the next one,” he said. “Once you kick off and all the cameras flash one time, it ends up just being football. When we won our first Super Bowl (Seattle’s 43-8 win over Denver) we didn’t have any experience. Nobody had been there. Nobody had played there. And we won by almost 40 points.”

Sherman played a big role in shutting down Peyton Manning in that game, and a year later was almost as good against Tom Brady in a heartbreaking loss. Now he’s got another generational quarterback to deal with in Mahomes, with the Super Bowl on the line once again.

If the regular season is any indication he’ll be out to Mahomes’ right on almost every play, an intimidating presence on that side of the field. He’s pushing 32, an advanced age for an NFL cornerback, but Sherman plays with a fierceness of a player a decade younger.

So far this week he’s used everything but the players on the other side of the ball to motivate him for the game. That figures to change when the ball is kicked off, the cameras flash, and another big game begins.

Then it might just become Mahomes against Sherman, the game we all want to see.