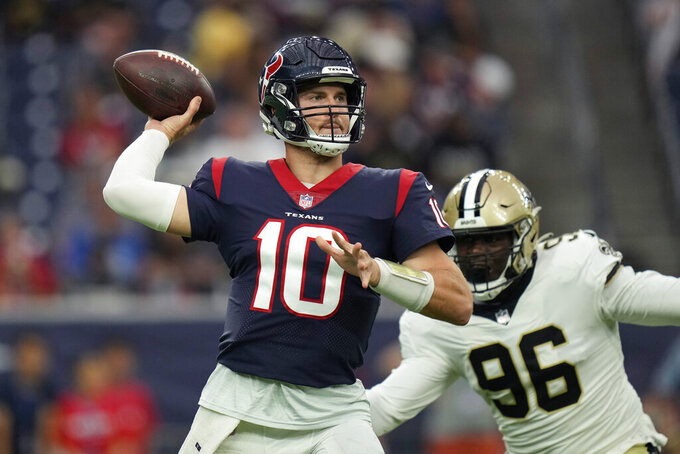 But he was encouraged by the limited work of his starters on both sides of the ball.

“I saw a lot of things I really liked out there,” Allen said. “There are some things we’ve got to get cleaned up. The ball was on the ground too many times. We’ve got to get that aspect cleaned up, but I was pleased with the way the first units went in there and played. Offensively, we scored a touchdown, and defensively, we had two three-and-outs so that was encouraging. "

Andy Dalton threw a touchdown pass on his only possession in his debut with New Orleans, but the Saints fell to the Texans 17-13 after a touchdown in the final minute in the preseason opener for both teams.

Dalton, who joined the Saints after spending last season with the Bears, started with Jameis Winston out after he injured his foot in practice Monday.

“He did a nice job moving us down the field," Allen said. “I thought he operated in the pocket well. We did a couple of good things in the run game. Andy did a really good job of operating the offense."

Dalton was a perfect 5 for 5 for 51 yards. He threw a 9-yard touchdown pass to Dwayne Washington to put New Orleans up 7-0 early.

“That’s how you want the drive to go," Dalton said. “We did some good things and were able to score once we got in the red zone. If you can draw it up, that’s how you do it."

Houston quarterback Davis Mills was 3 for 3 for 14 yards in two drives where the team failed to get a first down.

The Texans are sticking with Mills as their starter this season despite a subpar rookie campaign when he played 13 games in the team’s dreadful 4-13 season.

“It’s a start," coach Lovie Smith said. “We didn’t have a lot of production when our one offense was out there, but we got what we wanted accomplished with him. He’s healthy going into Game 2."

Both teams featured the debut of new head coaches with Allen taking over for Sean Payton in New Orleans and Smith replacing David Culley for the Texans. Both Allen and Smith moved into the top job after working last season as their team’s defensive coordinator.

Jeff Driskel threw a 6-yard touchdown pass to rookie Johnny Johnson III in the final minute to lift Houston to the win.

The Texans cut the lead to 7-3 on a 49-yard field goal by Ka’imi Fairbairn late in the first quarter.

Houston took a 10-7 lead when Driskel connected with Jalen Camp on a 4-yard touchdown pass early in the second. That score came after Obo Okoronkwo recovered a fumble by quarterback Ian Book.

Camp had a 49-yard reception on Houston's final drive to help set up the score.

The Saints tied it about two minutes before halftime on a 23-yard field goal by Will Lutz.

A bright spot for the Texans was the play of rookie fourth-round pick Dameon Pierce, who had five carries for 49 yards. Houston is expected to start Marlon Mack, but Pierce is likely to also get carries this season as the team attempts to improve a running game that has been among the worst in the NFL for the past two seasons.

“Dameon has been impressive in practice and we expected him to come tonight and do some things that he did and just keep fighting," Smith said.

Houston rookie safety Jalen Pitre, a second-round pick, had a solid debut with four tackles, including one for a loss.

Chase Hansen led the Saints with six tackles, including two for losses, and returned an interception 44 yards to set up a field goal in the second quarter.

It was one of three interceptions thrown by Driskel.

The Texans were without their two first-round draft picks with cornerback Derek Stingley Jr., taken third overall, and left guard Kenyon Green, the 15th pick, missing the game with injuries.

Stingley has been participating in practice but is being brought along slowly as he continues to recover from September surgery to repair a torn ligament in his foot. Green has missed practice time recently with a knee injury.

Stingley was a consensus All-America selection as a freshman in 2019 but was hampered by injury the past two seasons, including being limited to just three games last year at LSU because of the foot injury. Despite the setbacks, the Texans are confident that he’ll be able to step in early and help turn around a secondary that was among the league’s worst last season.