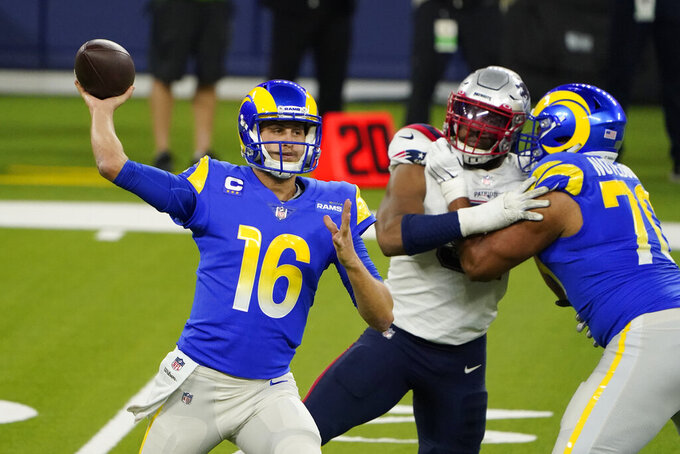 INGLEWOOD, Calif. (AP) — While Sam Darnold is back home on the West Coast this weekend, he'll undoubtedly think back to the days when he was a college superstar bound for NFL success, not a beleaguered pro quarterback trying to hang on to his job with a winless team.

Those days were actually less than three years ago. That's when Darnold left Southern California to become the savior of the New York Jets — and almost nothing since then has gone according to script.

The Orange County native returns to Los Angeles leading the NFL's worst offense for an 0-13 team that has to face the NFC West-leading Los Angeles Rams (9-4), who have the league's best defense.

Darnold isn't playing great for a coaching staff that seems unlikely to be around next year, when the Jets could choose Trevor Lawrence or another top quarterback with their high draft pick.

No, Darnold’s first trip home for the holidays isn’t exactly filled with joy and cheer.

He’s still hoping the Jets can somehow figure out a way to make it festive.

This doesn't appear to be a great opportunity for the Jets, whose franchise-record losing streak stands at 13 games heading into their final three chances to avoid the third 0-16 season in NFL history.

Not much about the matchup at SoFi Stadium suggests this will be New York's day: The Rams' phenomenal defense has shut down opponents with much more offensive competence than the woeful Jets, while Los Angeles' offense has been steadily productive during four wins in the past five games.

Darnold has had three rough games since his return from injury, completing 57.9% of his passes for two touchdowns and three interceptions while getting sacked nine times. The Jets have been outscored 91-34 in those three games, with Darnold twice failing to lead a touchdown drive.

Darnold imagined family and friends in the stands to watch him when he returned home, but he'll still try to do the improbable for them.

“I have great teammates, great coaches to be able to talk to when things aren’t going well, and I have great friends and great family and a great support system," Darnold said. "Things haven’t gone necessarily the way that I envisioned them, or many people envisioned this year going, so it really is just one day at a time."

The Rams are tied with the Seahawks atop the NFC West, so they can’t afford to take the Jets lightly before a season-defining trip to Seattle next week. Los Angeles can also clinch a playoff berth with a win.

Sean McVay has been full of praise for Darnold, Jets coach Adam Gase and the New York defense all week. His Rams were shown film of the Jets' near-miss two weeks ago against the Raiders, and were then reminded that the Raiders beat the Saints and the Chiefs.

“You want to be honest about what's going on, but ... I don't worry about the maturity of this team to understand the focus and concentration that’s required every single week, regardless of who the opponent is,” McVay said.

The Jets know they’ll have their hands full trying to keep Aaron Donald from blowing things up in the backfield.

“He gets double-teamed a lot, but it doesn’t matter,” Gase said. “The guy is phenomenal at defeating blocks whether one or two guys are on him, whether he’s back-side, front-side of the run. If he’s not the best player in the league, he’s top three. He’s so disruptive.”

Donald leads the NFL with 12 1/2 sacks, but that statistic only measures a fraction of his impact for the NFL's top defense.

The younger Jefferson has just 15 catches for 170 yards this season for Los Angeles, but could be auditioning for a bigger role next season if Josh Reynolds leaves as a free agent after the best season of his pro career.

When Gore went out with a concussion early against Las Vegas two weeks ago, Ty Johnson and Josh Adams combined to give the Jets their best rushing performance in two seasons under Gase with 206 yards rushing.

With the 37-year-old Gore back last week, New York’s ground attack was mostly grounded again. Gore got just 23 yards, and the Jets finished with 69 overall.

Gase still isn’t committing to giving the younger running backs — including La’Mical Perine, who could return this week from a sprained ankle — more snaps down the stretch.

The Jets have had a knack for getting on the scoreboard early — and then struggling the rest of the way. New York has scored on its opening possession in seven straight games, the longest active streak in the NFL and a franchise record.

The Rams are acutely aware of the Jets' success of opening possessions, likely since it provides a concrete achievement to highlight in their defensive preparation. McVay, defensive coordinator Brandon Staley and cornerback Darious Williams have all mentioned the Jets' success on opening drives this week.