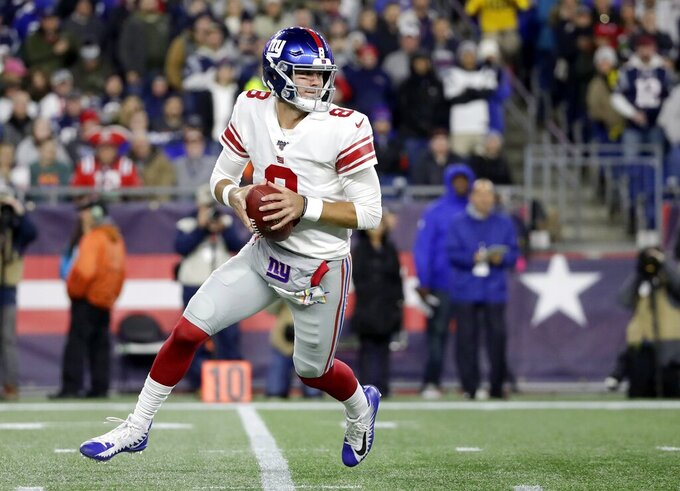 New York Giants quarterback Daniel Jones rolls out to pass against the New England Patriots in the first half of an NFL football game, Thursday, Oct. 10, 2019, in Foxborough, Mass. (AP Photo/Elise Amendola)

FOXBOROUGH, Mass. (AP) — Daniel Jones will have plenty to learn from in this one.

The rookie quarterback threw three interceptions during an error-filled display by the New York Giants, who took advantage of some New England mistakes to stay close for three quarters before losing to the Patriots 35-14 on Thursday night. Since winning his first two starts after taking over as starter for Eli Manning, Jones has lost back-to-back games.

Jones completed 15 of 31 passes, including one that Golden Tate broke open for a 64-yard touchdown that was the first passing touchdown allowed by the Patriots' league-leading defense this season. The Giants (2-4), who opened as a 15½-point underdog, tied the game 14-all late in the second quarter when Markus Golden picked up a fumble and ran it 42 yards for a touchdown.

But Tom Brady drove the Patriots (6-0) to a TD just before the end of the half, and then Jones was picked off by Stephon Gilmore on the Giants' first possession of the third quarter.

"He tried me the first play of the game," said Gilmore, who also deflected the ball that was picked off by John Simon — one of two first-half interceptions. "And I figured he was going to keep trying to come to me."

On their first drive of the fourth, Jones threw a screen pass to Jon Hilliman, who fumbled; it was recovered by Kyle Van Noy and taken 22 yards for a touchdown. The Giants also had a punt blocked and returned for a touchdown in the first quarter.

"Those kind of plays, that kind of stretches out the score," Giants coach Pat Shurmur said. "You can't, obviously, throw interceptions. But (Jones) made a lot of other good throws in the game."

The No. 6 overall pick in the draft, Jones was a much-hyped replacement for the 38-year-old Manning, who beat the Patriots twice in the Super Bowl but has led them to just one playoff appearances — and zero postseason wins — since the 2011 championship game. Jones, who beat Tampa Bay and Washington before losing to Minnesota and New England, has seen his passing rating decline in four straight weeks.

He had as many turnovers against the Patriots in one game as Manning had in five games against them in his career, including the postseason.

"Every time you lose, you always have to take the lessons and learn from it," safety Jabrill Peppers said. "There are no moral victories, but it is a lot we can build on."

The Giants were missing three of their top playmakers.

Running back Saquon Barkley was out with a sprained right ankle for the third straight game; his backup, Wayne Gallman, was out with a concussion. Tight end Evan Engram, their leading receiver, has a knee injury. Receiver Sterling Shepard is in the concussion protocol.

"I'm a no excuses guy," Golden said. "This is football. Injuries are going to happen and other guys have to come in and step up. We've got to be able to win with the guys we have."