Gordon on why he returned to Chargers this week: "We're 1-2" 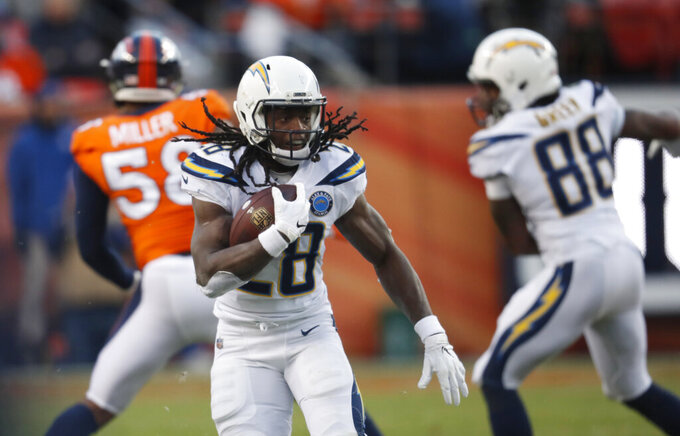 COSTA MESA, Calif. (AP) — Melvin Gordon would likely be continuing his holdout if the Los Angeles Chargers had gotten off to a 3-0 start. But with the Bolts on a two-game losing streak after winning their opener, the running back decided this week was the best time to report.

"We're 1-2. You don't want to get into a big hole," Gordon said after Friday's practice. "You work the whole offseason to be in a good position to make the playoffs. I had to come back at some point. I want to come back and help contribute. When we lost again (last Sunday to Houston) I wasn't feeling this at all. These guys did nothing to me."

Gordon's return might not have come at a better time. The Chargers are hampered by injuries going into Sunday's game at Miami.

Coach Anthony Lynn is hoping he doesn't have to use Gordon this week, but he might not have any choice. Running back Justin Jackson, who was averaging 20 plays per game during Gordon's holdout, will not play after suffering a calf injury Thursday. Gordon is on a two-week roster exemption but could be activated after Saturday's practice. If Gordon doesn't play, the Chargers would likely sign Detrez Newsome from the practice squad.

Lynn said Gordon's fitness level looks great, but that the past couple of days have been spent on the finer points such as position alignment.

"We really had to drill those today and try to get him back into shape mentally for the position," Lynn said. "He hasn't made a cut and had to break a tackle. We tried to put him through the gauntlet in practice to simulate hitting. It's still not real football. Ideally, you don't want to play the guy this week."

Gordon held out because he was seeking a contract of $13 million to $14.4 million per season, which was equivalent to deals signed by Todd Gurley, David Johnson and Le'Veon Bell. The Chargers offered around $10 million per year before suspending negotiations prior to the start of the regular season.

His base salary for this season is $5.6 million under the fifth-year option of his rookie contract. Gordon was subject to $1.2 million worth of fines along with losing $988,236 for missing the first three games, but he said the team cut the fines in half.

Gordon said he understood the consequences of sitting out and that he was the reason he held out despite his agents advising him to come in.

"Nothing came out of it, so I try not to think about it," he said. "Obviously, there is no contract, so it's obviously something I don't want to speak on. ... To think the fines would be completely washed away, I knew if I got in this situation, it wouldn't be. You do something against the rules, you pay the consequences."

Gordon also said he talked to general manager Tom Telesco throughout the process and that his relationship with the front office remains good.

"I don't think the bridges are burned, we just had some differences," Gordon said. "He (Telesco) let it be known he wanted me back. He had no problems and understood from a player's perspective."

Gordon has gained over 1,200 yards from scrimmage and scored 10 or more touchdowns in three straight seasons but has had his struggles against Miami. He is averaging only 2.6 yards per carry and has one touchdown in three games against the Dolphins.