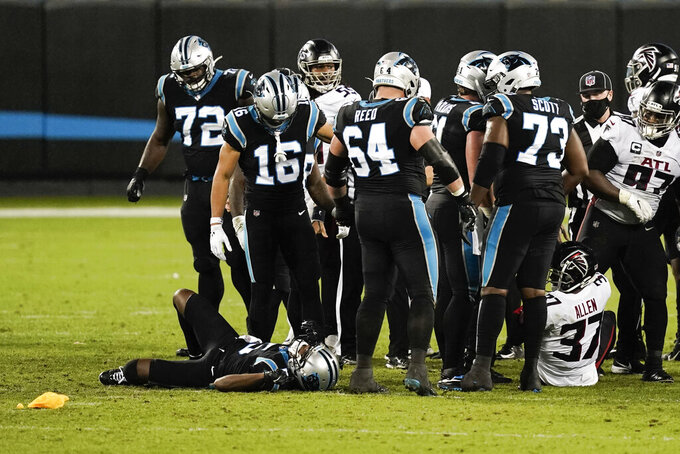 Carolina Panthers quarterback Teddy Bridgewater is injured on the field during the second of an NFL football game against the Atlanta Falcons Thursday, Oct. 29, 2020, in Charlotte, N.C. (AP Photo/Gerry Broome)

Carolina running back Mike Davis described Harris’ hit on the quarterback in the third quarter of Thursday night’s 25-17 loss to the Falcons as a “cheap shot.”

As Bridgewater was trying to scramble up the middle and avoid a sack late in the third quarter, he was kicked in the midsection by linebacker Dante Fowler and then took a shot to the back of his neck from Harris after landing on the ground.

“Yes, I think it was cheap shot,” Davis said. “He hit him in the neck. You just hate to see that. It was unnecessary.”

Bridgewater left the game for two series but returned after working out the stiffness in his neck. He tried to lead the Panthers on a final drive to tie the game, but the rally was cut short by an interception near the goal line.

Bridgewater seemed more perturbed that “someone stuck their leg out and tripped me," slowing his momentum. After that, he simply tried to get down to protect himself because he said ”I knew they were swarming.”

He remained on the field for several minutes after the hit as trainers gathered around him.

Falcons coach Raheem Morris said he knows in that type of a situation that officials are going to protect the quarterback and didn’t dispute Harris' ejection.

“I know he ran up on him. I know he hit him,” Morris said of Harris’ hit. “I’m not sure if he made full contact with his head, but obviously the officials saw it that way and so did New York and so you’ve got to deal with it and get him off the field and finish the game.”

Bridgewater never looked comfortable in the pocket all night, and even more so after returning from the injury with 9:45 remaining in the game.

Perhaps it's because, as coach Matt Rhule said, he was “under duress” all night from Atlanta's blitzing defense.

“You just can’t really win when you can’t control the line of scrimmage,” Rhule said.

Carolina failed to get much going throughout the second half, managing just one field goal. Wide receiver Curtis Samuel said the energy was zapped when Bridgewater left the game.

“Everyone felt that,” Samuel said. “Anytime your QB goes down nobody is happy. We didn’t like the hit.”

Still, the Panthers have to find a way to finish games.

It's the third straight game that Bridgewater has had the ball in his hands with a chance for the Panthers to either take the lead or tie it but failed to convert.

“We have to find ways to finish the game,” Bridgewater said. "That can’t be the common thing around here — coming up short.”

The good news for Bridgewater is help is on the way.

Christian McCaffrey is expected to return for Carolina's next game against the defending Super Bowl champion Chiefs on Nov. 8.

Bridgewater said in the meantime the fast-fading Panthers (3-5) need to reflect on some of things that have gone well so far and some other things that need improving.

One of those will surely be the team’s struggles on third downs, where they converted just 2 of 10 chances.

That could require some self-scouting over the long break, saying the Falcons were on to Carolina's tendencies.

“They knew some of the things that we wanted to do and they had answers for it," Bridgewater said. "You watch the tape and we have to evaluate what those guys did well and what we didn’t do so well.”