Saints QB Hill treating next games as 'big' for his career 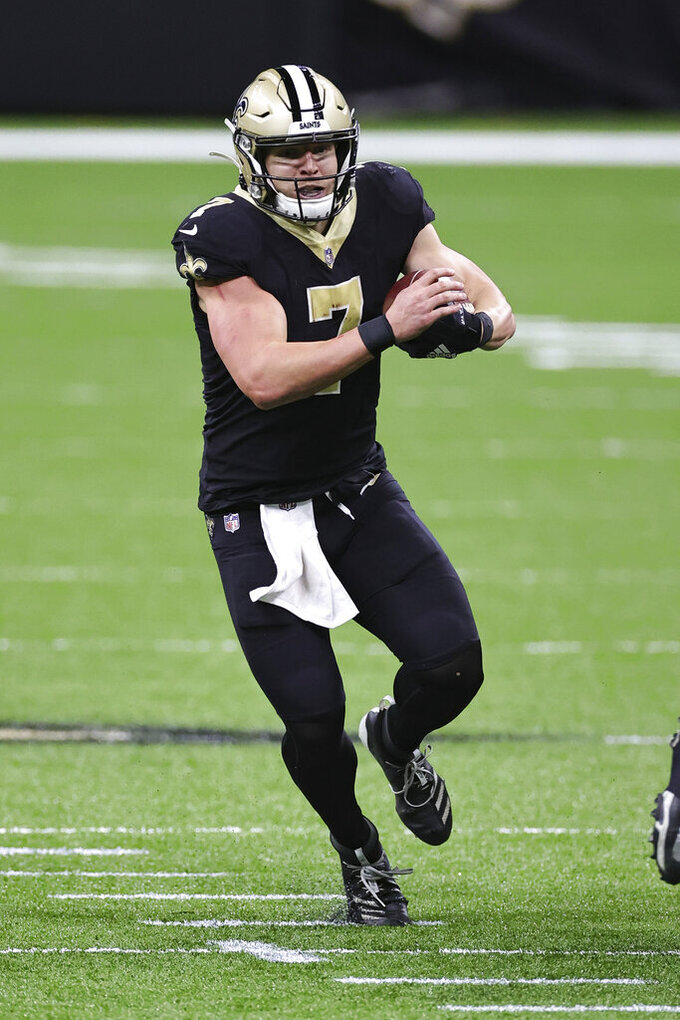 NEW ORLEANS (AP) — Taysom Hill intends to treat the next couple of games on the New Orleans Saints' schedule as if the trajectory of his career as an NFL quarterback is in the balance.

“There are a lot of really great players that didn’t get an opportunity in the NFL and these opportunities are few and far between,” said Hill, who knows better after not getting his first NFL start at QB until last weekend — at age 30.

“So my mindset is to do everything I can to take advantage of every single opportunity,” Hill continued. "I’m preparing as hard as I can ... and each game is a big game for me.”

If this is indeed Hill's audition to succeed 41-year-old starter Drew Brees long term, then it's off to a promising start.

In a 24-9 victory over Atlanta last weekend, Hill completed 78.3% of his passes for 233 yards without an interception and ran for two touchdowns.

But one good game does not a career make, and Hill will have to show he can reliably and consistently keep the Saints' offense moving, with the next test coming at Denver this Sunday.

The fact that Hill last week became the primary quarterback during Brees' absence because of rib injuries caught many NFL observers off guard for a few reasons.

For one, the Saints also have former Tampa Bay starting quarterback, Heisman Trophy winner and 2015 first overall draft choice Jameis Winston on their roster. And before last weekend, Hill had never started and had thrown a grand total of 20 passes since his NFL career began in 2017. And Hill is still looking for his first career touchdown pass.

In addition, the 6-foot-2, 220-pound, fleet-footed Hill has emerged as one of the NFL's most versatile and effective utility players. He's done everything from blocking punts to converting fake punts as an upback, covering and returning kicks, playing tight end and of course, substituting for Brees intermittently to give New Orleans' offense a change-of-pace option threat.

But Saints coach Sean Payton reiterated this week that Hill's evolution in New Orleans never eclipsed the original vision the Saints had for the former BYU quarterback when they claimed him off waivers from Green Bay.

“Make no mistake, when we claimed him off the film, it was as a quarterback,” Payton said. “Our vision was not as those other things. Those are end results after he was here.

“Here’s what no one else is privy to, and it’s hard,” Payton said. “What the fans and other people are privy to are the special teams snaps, the wildcat snaps, the tight end (and) receiver snaps. They don’t get a chance to see the same snaps that (coaches) might see throughout the course of a year that take place that aren’t necessarily game snaps.

Starting Hill over Winston “wasn’t by any means an easy decision,” Payton added, "because I feel like we have two capable and really good quarterbacks that are in the building already.”

The Saints are eager for Brees, who'll miss at least two more games, to return. But they also have sounded gratified to see Hill finally get his chance after persevering through an injury-filled college career and spending his first three full seasons as a pro graciously accepting — and executing — unconventional assignments.

“Everybody knows how talented Taysom is,” Saints running back Alvin Kamara said. "He deserves it.

Hill had major injuries in four of his five seasons at BYU: a knee injury, a bone fracture in his leg, a foot fracture and a hyper-extended elbow.

“My wife and I dealt with a lot of disappointment through college where pretty much every one of my offseasons but one were spent rehabbing from an injury,” Hill said.

Since arriving in New Orleans, Hill said he has intently studied and sought to emulate the way the record-setting Brees prepares mentally and on the field. In the process, Hill said, he has gained in Brees a close friend.

“He’s an incredible mentor,” Hill said. “So I’ve tried to adopt everything that that guy has done.”

Kamara said he appreciates Hill's intent to learn from the NFL's all-time passer, but also notes that Hill is by no means a carbon copy of Brees or any other quarterback, for that matter. And Kamara means that in a good way.

“Don’t get me wrong. Drew Brees is a great person to learn behind. But Taysom is Taysom,” Kamara said. "They’re not the same player.

Kamara light-heartedly portrayed Hill as giving a "politically correct answer like, ‘I’m trying to be like Drew and model my game after Drew.’

“But Taysom, he has his own flavor when he gets in there. He has his own kind of thing,” Kamara added. "Maybe in his head he feels like he’s being like Drew. But I probably would, too, if I was at quarterback.”