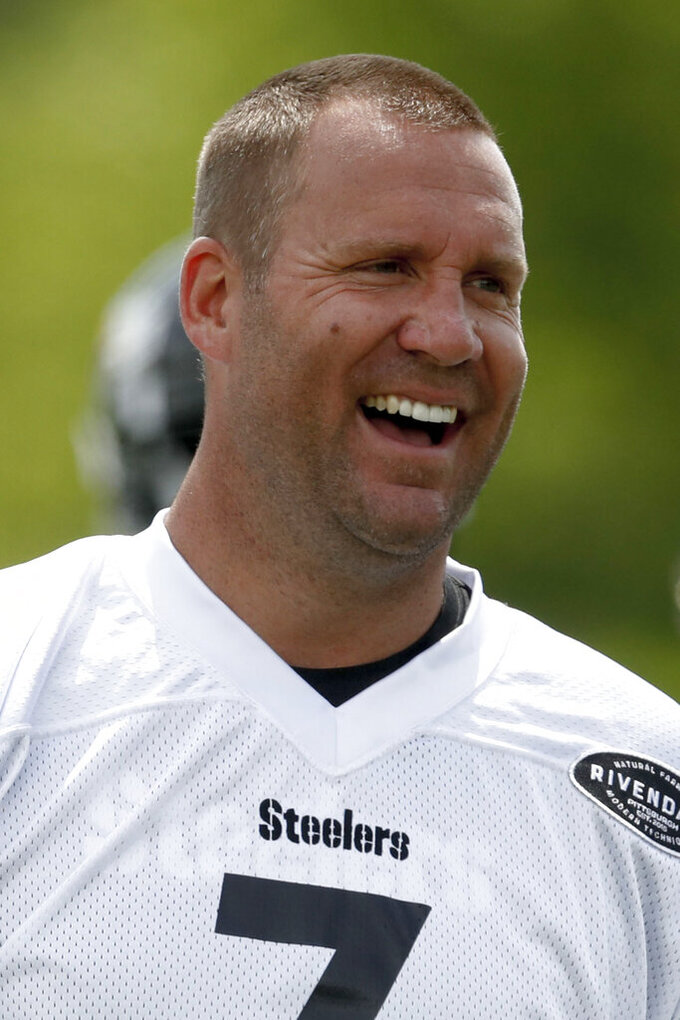 FILE - Pittsburgh Steelers quarterback Ben Roethlisberger (7) has a laugh with teammates in drills during an NFL football practice in Pittsburgh, in this Tuesday, May 21, 2019, file photo. Ben Roethlisberger is returning for an 18th season with the Pittsburgh Steelers and is taking a pay cut to do it. The team and the two-time Super Bowl winner announced on Thursday, March 4, 2021, they have agreed on a new contract that assures the 39-year-old will be back in 2021.(AP Photo/Keith Srakocic, File)

PITTSBURGH (AP) — Ben Roethlisberger is returning for an 18th season with the Pittsburgh Steelers and is taking a pay cut to do it.

The team and the two-time Super Bowl winner announced on Thursday they have agreed on a new contract that assures the 39-year-old will be back in 2021.

Financial details were not immediately available, though the Steelers made no secret of the need for Roethlisberger to take a pay cut to ease some of the burden of his NFL-high $41.25-million salary-cap hit scheduled for 2021.

“I am grateful to be at this stage of my career and more than happy to adjust my contract in a way that best helps the team to address other players who are so vital to our success,” Roethlisberger said in a statement. "I love this game and love to compete, and I believe in this team and my ability to deliver when called upon. It all starts with great preparation and I am ready to go.”

Roethlisberger passed for 3,803 yards with 33 touchdowns and 10 interceptions in 15 games in 2020 after missing almost all of 2019 with a right elbow injury. The Steelers won their first 11 games on their way to a 12-4 record and captured the AFC North title but were stunned at home by Cleveland in the first-round of the playoff game thanks in part to four Roethlisberger interceptions.

Steelers President Art Rooney II, head coach Mike Tomlin and general manager Kevin Colbert all expressed the desire to bring Roethlisberger, stressing the need to do it in a way that gives the Steelers some financial flexibility. The new contract does offer a bit more freedom, but Pittsburgh is facing several high-profile departures in free agency.

Wide receiver JuJu Smith-Schuster, outside linebacker Bud Dupree, running back James Conner and left tackle Alejandro Villanueva are among more than a dozen Steelers who will hit the open market this month. Conner and Villanueva are unlikely to be brought back after underwhelming play in 2020. Smith-Schuster and Dupree have likely priced themselves out of a return.

Throw in the retirements of center Maurkice Pouncey and tight end Vance McDonald and the decision to part with offensive coordinator Randy Fichtner — all three of whom have a close relationship with Roethlisberger — and the veteran quarterback will find himself in the midst of an overhaul.

The franchise's leader in just about every major statistical passing category remains, he was at the controls of an offense that finished last in the NFL in yards rushing and yards per rushing attempt. Those are numbers the front office said it will spend the offseason trying to improve.

Pittsburgh has the 24th pick in the draft and several glaring needs, particularly along the offensive line. If left guard Matt Feiler — also a free agent — doesn't come back, Roethlisberger could find himself playing behind a line with three new starters and a running back that isn't Conner for the first time since 2017. Include the imminent departure of the reliable Smith-Schuster and the absence of McDonald — in essence a third tackle in 2020 when he was on the field — and the Steelers will have a very different look in 2021.

Yet rather than nudge Roethlisberger toward retirement and see what the club has in backup Mason Rudolph — who is entering the final year of his rookie deal — the Steelers will run it back hoping their late-season fade was a one-off.

“We know that Ben can still play at a high level and do special things for this team,” Colbert said. "Our goal remains the same, to put together a roster that will compete for another championship. We are happy that Ben will be one of our leaders to help us accomplish that goal.”