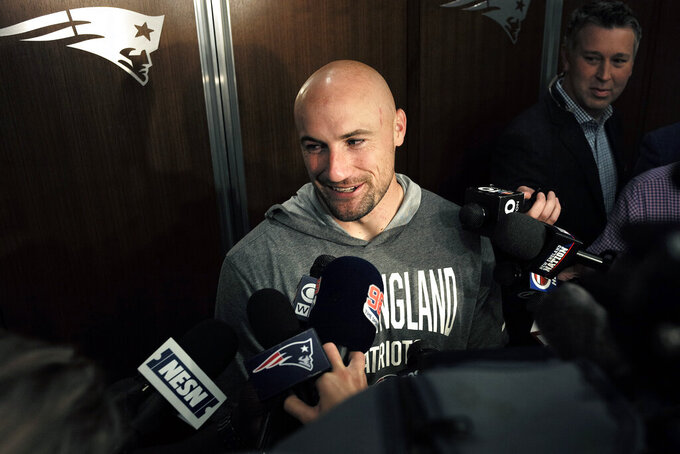 FOXBOROUGH, Mass. (AP) — Antonio Brown's winding summer odyssey has officially landed him as a member of the New England Patriots.

But just how the sometimes disgruntled receiver will fit into the Super Bowl champions' culture has become the Patriots' biggest focal point in the aftermath of their 33-3 drubbing of the four-time All-Pro's former team on Sunday night.

Brown's signing was announced by the Patriots late in the afternoon on Monday.

According to Brown's agent, Drew Rosenhaus, the receiver signed a one-year deal, which will guarantee him $9 million this season and the potential to earn as much as $15 million.

It's far short of the money Brown lost following his short tenure with the Oakland Raiders , that ended with the team voiding more than $29 million guaranteed money and releasing him.

But it opened the door for Patriots coach Bill Belichick to swoop in and take a chance on a talented player that could help take a receiving groups surrounded by questions in the preseason to one of the most formidable in the NFL.

Brown was not present in the locker room during the period open to reporters on Monday. Of the players that did talk, few were willing to talk about their new teammate.

It's the latest gamble by Belichick, who has previously brought in castoffs such as Randy Moss and Corey Dillon to mixed results. Moss gave New England three straight seasons of 1,000 receiving yards and 47 receiving touchdowns from 2007 to 2009 in his Hall of Fame career. Dillion ran for 1,635 yards in the 2004 season to help New England win its third Super Bowl in a four-season span.

Without Brown, the Patriots looked every bit like a team primed to make a run at another Lombardi Trophy in dismantling the Steelers.

At age 42, Tom Brady continued to defy his age with a 341-yard, three-touchdown game, spreading the ball around to seven players. It ended preseason questions about who Brady would throw to following the retirement of tight end Rob Gronkowski and with only reigning Super Bowl MVP Julian Edelman to lead a young group of receivers.

With Brown, the 11-time defending AFC East champs have two of the most athletic receivers in the league. They recently got back Josh Gordon following his reinstatement for violations of the league's substance abuse policy.

Together, Brown and Gordon give Brady proven deep threats to go along with the sure-handed Edelman in the slot.

That is, if Brown can avoid the pitfalls that caused him to fall out of favor with each of his two previous teams.

"I think people understand when you come here you can't really make mistakes or do things that can be distractions for the team," Patriots running back Rex Burkhead said. "You gotta lock in, buy in and understand it's a team atmosphere and there's goals ahead."

The run defense. Linebackers Dont'a Hightower, Jamie Collins and John Simon limited the Steelers, leaving them one-dimensional for most of the game. For the game Pittsburgh managed just 2.5 yards per rush.

The Patriots went 0 for 3 in the red zone against Pittsburgh. It's something the offense will need to improve upon as the season progresses. But it will be moot if Brady and the offense keep having games in which each of their touchdowns come from 20 or more yards.

Receiver Phillip Dorsett has acknowledged that it took time for him to feel completely comfortable in the Patriots offense after he was traded from Indianapolis in 2017.

He appears to have found his groove. Dorsett had four catches for 95 yards and two touchdowns — including a 58-yard TD reception against the Steelers. It was the first multi-score game of his career.

Ted Karras may need a few games to get used to his new role at starting center with David Andrews on injured reserve with blood clots in his lung. Belichick said Karras showed some inconsistencies getting the ball to Brady with enough velocity in shotgun formations.

Right tackle Marcus Cannon left the game late in the fourth quarter with a shoulder injury. If he misses time, Thuney could slide over from left guard to right tackle.

40-0. That is the Patriots' record at home against AFC teams with Brady and Edelman in the starting lineup together.

Assuming Brown gets up to speed on the playbook enough to be in the lineup for Sunday's visit to Miami, it would mean somebody would have to sacrifice playing time. Possible candidates include rookie Jakobi Meyers and Dorsett.