After another goodbye, Talib says Hello Again to Super Bowl 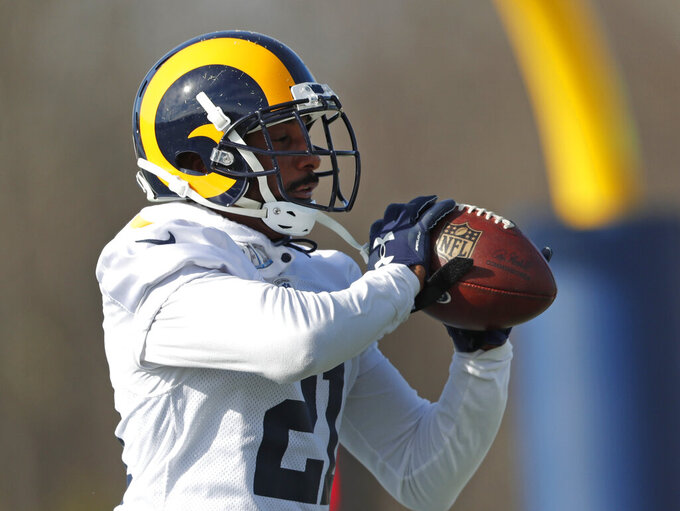 ATLANTA (AP) — It may seem as though Aqib Talib says "goodbye" as often as the flight attendant standing at the front of the plane. And yet, he keeps resurfacing on good teams — and at the Super Bowl.

The colorful cornerback brought his necklaces, his personality and, yes, even defensive coordinator Wade Phillips back to the big game — this time with the Rams.

This trip comes three years after the 32-year-old won it all with the Broncos, which is where he landed after coming oh-so close to making the title game during his brief stay in New England.

Even in a world of ever-increasing roster turnover, it feels unusual to see a player who has enjoyed this much success change uniforms so often. On his fourth team in the past seven seasons, Talib has been voted to the Pro Bowl five times and named once each to the AP All-Pro first and second teams. All those honors have come later in his career — since he left Tampa Bay, the team that used the 20th pick to draft him in 2008.

But there have been problems along the way.

The Bucs dealt him to New England for a fourth-round pick in 2012, only weeks after the NFL suspended him for using the banned substance, Adderall. That was the last in a number of incidents in Tampa — a fistfight with a teammate; accusations of beating up a taxi driver ; charges, later dropped, of shooting a gun at his sister's boyfriend.

He showed little interest in talking about any of it this week: "That old, bro." Asked about his leadership skills, which have been praised repeatedly, both this week and during his season with the Rams, Talib said nothing much has changed over the years.

"I don't really know about what skill. I just go be myself," he said. "Myself was the same eight years ago, 10 years ago, in college ... in high school."

Though it wasn't pretty on his way out of Tampa, the trade to New England sparked the blossoming of his career.

"Probably more professional, more alarms set in the morning," Talib said, when asked what spending a year-plus with the Patriots met to his career. "Never late. Zero tardies. You learn that stuff going through New England."

In a bizarro-world turn of events, Talib's last game with the Patriots ended when Denver's diminutive receiver Wes Welker, of all people, knocked him out of the game while throwing a vicious block as Talib came across the middle in the 2014 AFC title game. Denver won 26-16.

And then, only a few months later, and after having been humbled in the Super Bowl by Seattle, the Broncos signed Talib to a six-year, $57 million contract that made him legitimately rich for the first time.

Talib spent four of those six seasons in Denver, but there were issues there, too.

He got suspended twice — once for poking the eye of a Colts tight end, then again in the aftermath of a rather comical exchange in which he tore the chain off the neck of his nemesis, receiver Michael Crabtree, leading to a full-on brawl between the two the next season.

More seriously, Talib accidentally shot himself in the leg in a nightclub incident in Dallas during the 2016 offseason.

As his tenure wore down in Denver, the Broncos' "No Fly Zone" defense sunk quickly from its heights of winning the Super Bowl in the 2015 season.

The Broncos, in need of a new quarterback and with high-paid cornerbacks stacking up on the roster, were in the market to deal Talib last offseason. Talib wanted a reunion with Belichick in New England or with Phillips, who had gone from Denver to LA; the Broncos traded him out of the conference.

"It's our business," he said. "They had three corners making big money, they needed a quarterback. Something's gotta give. I ain't mad, though. John (Elway) threw the oop, I dunked it."

And wound up in LA, which has brought him back to the Super Bowl.

The week, and the season, has been a lovefest between the unlikeliest of reunited couples: Talib and the 71-year-old "Son of Bum," Phillips.

"He's such a big personality guy that everybody likes him," Phillips said. "And he's a leader also. Coaching the defense, and the leader of the defense, you connect with a guy like that anyway."

Along with Marcus Peters, who the Rams also acquired in a trade this offseason, LA is one of the few teams in the league with a pair of All-Pro cornerbacks.

The matchups between the LA corners against Patriots pass catchers Rob Gronkowski, Julian Edelman and Chris Hogan figure to go a long way toward deciding if Talib walks away Sunday with his second ring in four seasons.